Future classics: car investments that could make you money 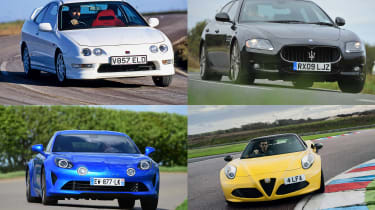 Buying future classic cars is a notoriously difficult thing to do successfully. It’s a big commitment to invest your money into a car in the hope that it will appreciate in value to turn a huge profit several years down the line and with so many variables and pitfalls, choosing the right vehicle for your cash is absolutely crucial.

How to spot a future classic

There is a trick to spotting future classics and it’s just about looking for those few key signs. Some signs are more obvious that others. For example attractive styling, desirability and rarity are pretty standard things to look for. Other attributes are a little more difficult to quantify, but a car featuring revolutionary tech or design will also stand a chance of rising in value.

The classic car market is currently in rude health so there’s never been a better time to dabble in a bit of four-wheeled financial speculation. You need not break the bank by spending hundreds of thousands on some Italian exotica in order to make a profit.

Obviously there are no absolute guarantees about which cars will become future classics but if you follow our guide then you should at least be a few quids in.

First up, in our ‘best future classics selection we’ve pinpointed some affordable models across various classes that are likely to start edging up in value. With prices starting from just £800 and everything from a sporty city runabout through to a hi-tech Japanese supercar to choose from, there should be something for every taste and budget. 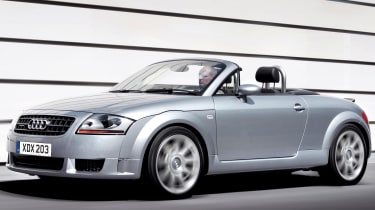 The original TT wowed onlookers at launch in 1998 with its concept-car style, and two decades on it’s still a jaw-dropping design. Sharing many of the bits you can’t see with a Volkswagen Golf means running costs are more ‘hatchback’ than ‘rare exotic’. The Audi is certainly more affordable to own than a Porsche Boxster of similar vintage. Many coupés remain on the road, but values of the rarer Roadster model will climb sooner. 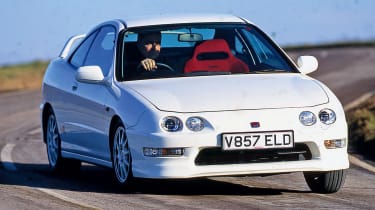 The DC2 is widely seen as the greatest-handling front-wheel-drive car ever, but there’s far more to it than its delightful chassis. A 1.8-litre VTEC engine revs to an amazing 8,800rpm, and is paired to a lovely Honda manual box. Official UK cars feature round headlamps; imports have square lights. 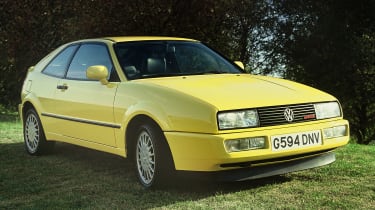 A hugely underrated car in its time, the Corrado possessed one of the sharpest front-wheel-drive chassis of any of its contemporary coupé rivals. The fast and tuneful VR6 models are the most desirable, but look out for the ultra-rare G60,with a 156bhp supercharged 1.8-litre engine. High-mileage examples start from around five grand, while the best are roughly double that. 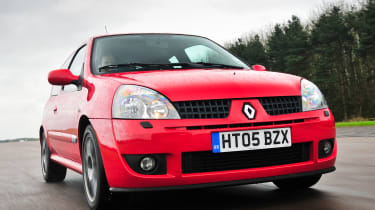 A beefy 2.0-litre engine wedged in a tiny supermini weighing little more than a tonne; this formula makes Renaultsport’s Clio 182 one of the most thrilling hot hatches ever. The best investment is the limited-run Trophy, complete with trick Sachs dampers and lightweight Speedline wheels. 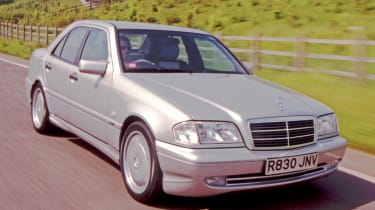 The late-nineties super-saloon scene was dominated by the BMW M3, with the Mercedes C43 AMG living in its shadow. That’s good news for used AMG fans today, because the C43 is much more affordable than its Munich rival. A 4.3-litre naturally aspirated V8 gives the Mercedes an old-school muscle-car vibe, and it’ll deliver the tyre-smoking antics to prove it. Avoid suspiciously cheap examples at around the five grand mark, and aim above five figures. 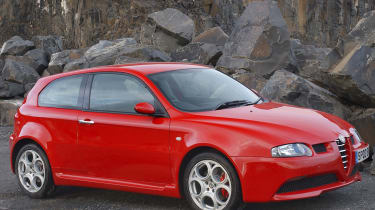 While most new hot hatches on the market these days are powered by four-cylinder turbocharged engines, the Alfa Romeo 147  GTA is a glorious digression. The 3.2-litre V6 under its bonnet is one of the finest to look at and listen to of any mainstream production car, and provides the GTA with a unique character among hot hatches.  As long as the 147 you’re considering has been serviced to schedule, there should be little to worry about, either, so you can get on with the pleasure of driving it or simply gazing at it. 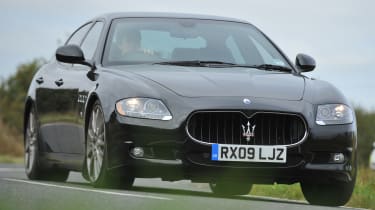 Is this the most beautiful saloon of all time? The Maserati  Quattroporte has the grace its German rivals can only dream of; add a glorious Ferrari-derived petrol V8 and it’ll be a strong investment. Go for a post-2008 car; they feature tweaks inside and out, as well as minor mechanical upgrades. 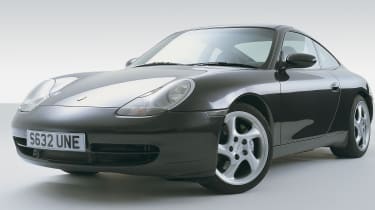 The 996 caused consternation among die-hard Porsche enthusiasts when it was released in 1997. If it wasn’t enough for some that its ‘fried egg’ headlights made it look frumpy next to the 993 it replaced, this car further troubled fans by ditching the traditional air-cooled engines. Despite these worries, the 996 was – and still is – a truly special car to drive.

Much of the lairiness of previous 911s was eradicated replaced with an agile yet predictable chassis, which, thanks to the engine’s position over the rear wheels, delivers stunning traction. The introduction of water-cooling didn’t harm the engine’s character, either; whether in 3.4 or 3.6-litre form, the flat six sings to a wonderful tune.

Its relative undesirability is one factor in why this generation remains, by some margin, the most affordable 911 on the market. But with values of others moving to stratospheric levels, it’s only a matter of time before 996 prices climb out of reach, too. 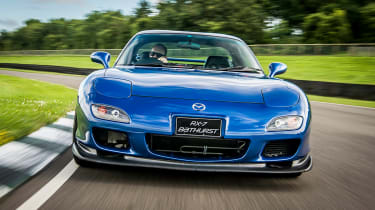 One of the most beautiful cars ever to roll out of Japan, the third-generation ‘FD’ Mazda RX-7 was equipped with a compact, powerful – but high-maintenance –turbocharged rotary engine. Many cars have been modified, but unmolested examples offer the best future classic potential. While there are lots available for £15k or so, some rare editions or mint versions can be much pricier.

We usually think of future classic cars as used models that have slipped under the radar to an extent but are set to undergo a renaissance in the eyes of the market. Years of depreciation will have taken their toll so, in theory, they should be relatively cheap to get hold of.

However, some cars have ‘future classic’ written all over them right out of the box and those with the budget to get on board early can end up with an appreciating asset that’s also a thrill to own. Below we highlight some contemporary cars that appear destined for classic status but don’t have the kind of exclusive waiting lists crammed with speculators that make them unobtainable for mere mortals like us… 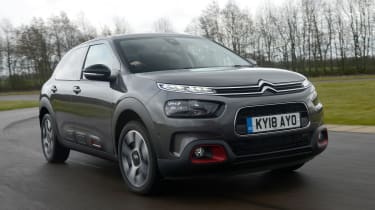 All of the most desirable Citroens mix clever design and oddball looks to attain classic status. The first-generation C4 Cactus qualifies on both counts, so it could quite possibly join them. Early models have Airbumps on the side panels to reduce car park dings – as quirky to look at as they are effective – and facelifted cars feature special hydraulic bump stops as well as multi-layered seat padding to make the Cactus as comfy as classic Citroens of old. 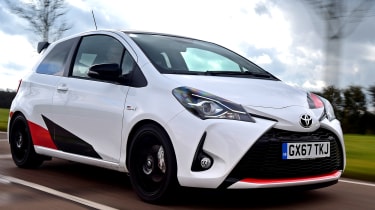 The Yaris GRMN is unique among current hot hatches. While almost all of its peers used forced induction, only Toyota ignored the common or garden turbo and chose a supercharger. This gives the Yaris a rev-hungry attitude �� and a fantastic noise. This quirkiness and the fact that only 80 examples will came to the UK mean it should be a sound investment. 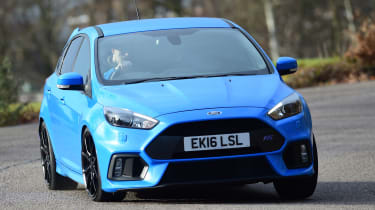 The previous Focus  is the latest in an illustrious list of fast Fords to wear the Rally Sport badge. The Sierra and Escort RS Cosworth fetch huge values now, even though you could argue (whisper this) that they aren’t that good to drive at the time. They couldn’t be any further from the reality of the Focus RS, however. Fast, raucous and a huge amount of fun, the third-generation car makes a great modern-day cut-price alternative to the four-wheel drive hyper-hatches like the Audi RS3 and Mercedes-AMG A45. The irony is that the RS is likely to be worth more than either in the future. Its relative rarity and the reputation that precedes it ensures the hot Focus holds its value strongly, and almost immediately. Keep one well maintained and – critically - original, and it’s sure to be a sound investment. And a lot more fun than a high-interest bank account.

Few hot hatchbacks get close to the hardcore level of the Golf GTI  Clubsport S. the most powerful Golf GTI ever produced delivers 306bhp, and it's made even more devastating courtesy of a cabin stripped of its back seats and much more of its sound deadening. The result is a stunning piece of kit. This car feels like a front-wheel-drive cousin to the Porsche GT3 RS. Volkswagen only ever built 400 examples of the GTI Clubsport S, and of those just 150 were sold in the UK, so this mega-hatch’s status as a future classic is all but guaranteed. 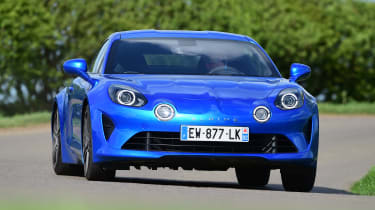 In 2017, Renault revived Alpine – a name steeped in motorsport history. The A110 took inspiration (and its name) from the world rally championship-winning coupé of the seventies. But while many modern pastiches lack the substance of the cars they’re influenced by, the A110 is a truly stunning car to drive. This, along with its probable rarity compared with rivals like the Porsche 718 Cayman, should secure strong values for the Alpine in the future. 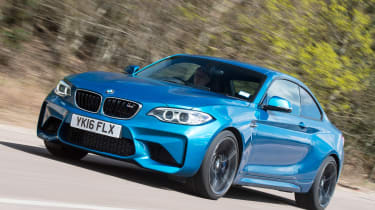 The M2 may be one of the smallest – and the most affordable – M car BMW has built in recent times, but that doesn’t make it the least talented. A potent engine and chassis balance to match mean it’s a really thrilling small coupé to drive. Go for the manual version if you can; in a time when cars are becoming simplified, autonomous and electrified, M2s with the more involving six-speed transmission will only ever become more desirable. The M2 Competition improved upon the original's formula further by adding a de-tuned version of the M4's engine. 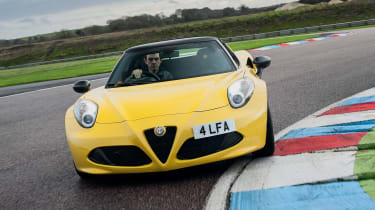 Critics weren’t completely sold on the Alfa Romeo 4C when it made its debut in 2013; the steering isn’t very precise, the ride lacks the finesse needed to make quick progress on British B-roads and the noise from the engine and exhausts is a bit flat. But all that will be forgotten soon enough. It’s a beautiful, ultra-rare, Italian two-seat sports car with a carbon-fibre chassis – surely a nailed-on classic?

Next, read our guide to the best cheap sports cars to buy