Ford’s Transit Connect and Courier updates include efficient new engines and a raft of tech, along with a new Connect Sport model 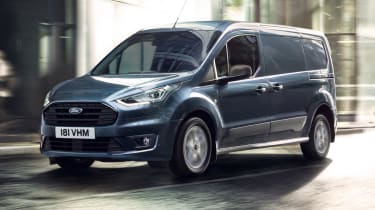 Ford has announced big updates for two of its smaller Transit models – the Transit Connect and Transit Courier – including Ford's all-new diesel engine (available in three states of tune) and a raft of new tech. A six-speed manual is offered as standard across both ranges, with an eight-speed automatic available on the two highest power Transit Connect diesels.

The Transit Connect now comes with the 1.5-litre EcoBlue diesel available in three states of tune: 74, 99 and 118bhp, with the claimed economies coming in at 60.1mpg (for both the 74 and 99bhp models) and 56.4mpg for the most powerful unit. Irrespective of power output, Ford states that the new diesel unit meets Euro 6.2 emission standards – due in part to the use of a selective catalytic reduction emissions system, i.e. the use of AdBlue.

An updated version of Ford’s ubiquitous 1.0-litre turbocharged EcoBoost petrol engine is now an option for the Connect, mated to a six-speed manual gearbox. Ford hasn’t specified the power output of the 1.0-litre unit just yet, but has stated that the 1.0-litre petrol is capable of 44.1mpg and utilises cylinder deactivation to help with economy and emissions.

The diesel Transit Courier on the other hand is only available with Ford's older TDCi unit, producing either 74 or 99bhp, and delivering a claimed 65.6mpg. A 99bhp petrol EcoBoost engine is also available, providing 53.2mpg.

Both vans receive Fiesta inspired faces, making use of Ford’s latest design language. Inside, the instrument cluster has been changed too, with higher-spec models coming with a six-inch infotainment screen with Ford’s built-in SYNC 3 infotainment system.

In terms of tech, new driver assists feature prominently on the revised Transit LCVs. An Intelligent Speed Limiter system has been fitted, while Pre-Collision Assist is also a part of the revised package, which can detect pedestrians in front and automatically apply the brakes.

On top of the updates is a new slightly racy model – the Transit Connect Sport. It comes with matt black sports stripes with silver or orange accents, and 16-inch Dark Stainless alloy wheels, however there are no mechanical changes to the van.

Pricing and further information will be announced at a later date, with both vans pencilled in for mid 2018 launches in the UK.

Will you be buying one of these new Ford Transit models? Tell us why below…