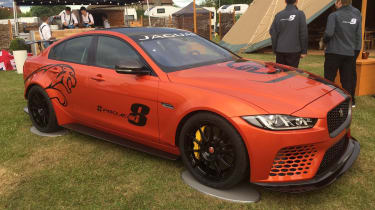 Jaguar  pulled the wraps off the most powerful road car in its history, the XE SV Project 8. The limited-run model made its debut at the 2017 Goodwood Festival of Speed and is priced from £149,995.

Only 300 examples of the Project 8 will be built, all by hand. It lifts the eight-speed automatic gearbox, all-wheel drive and 5.0-litre supercharged V8 powertrain from the F-Type SVR, but sees power rise from 567bhp to 592bhp. Jaguar claims a 0-60mph time of 3.3 seconds and 200mph top speed.

The Project 8 features a host of race-ready tweaks that ensures only 25 per cent of the standard XE’s parts are carried over. In terms of body panels, only the bonnet and roof are the same, and even the headlights have been moved by 14mm to allow room for the widened wheelarches. 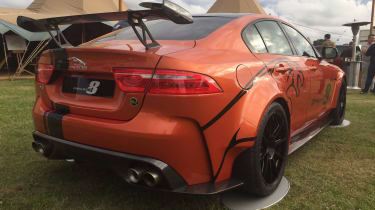 The Project 8 features a host of race-ready tweaks that ensures only 25 per cent of the standard XE’s parts are carried over. In terms of body panels, only the bonnet and roof are the same, and even the headlights have been moved by 14mm to allow room for the widened wheelarches.

To confirm the potency of the Project 8’s performance, the British marque sent a model around the Nurburgring and has consequently claimed the title of the fastest four-door saloon to lap the famous track with a time of 7:21.20s.

Despite being available to UK customers, all Project 8s will be left-hand drive. This is to help with optimum weight distribution. Every car has a rear-biased all-wheel-drive system.

The deep front splitter, huge rear wing (both are adjustable) and rear diffuser all play a part in creating downforce, without creating too much drag at high speed, Jaguar claims. The Project 8 gets modified aluminium body panels, a carbon fibre bumper and bonnet, as well as unique 20-inch alloy wheels. A quad-exit titanium exhaust is also standard.

Continuously variable dampers allow the XE to sit 15mm lower on track, while a set of powerful new carbon ceramic brakes and Michelin Pilot Sport Cup 2 tyres are fitted. Finally, there’s an electronic active differential – a first for the XE. 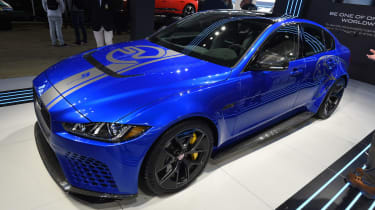 Every model gets a luxurious interior with special Performance seats and unique Oyster contrast stitching; in the rear the three seats make way for two sculpted chairs, with extra support on the squabs and bolsters.

Despite this hardcore appearance, all cars get a 10.2-inch Touch Pro infotainment system with sat-nav and a 4G WiFi hotspot. There’s also a 12.3-inch digital instrument cluster featuring new Dynamic-i software that adds a stopwatch and G-force meter.

A Track Pack is available, which ditches the rear seats and adds magnesium-framed buckets with four-point harnesses in the front. Track Pack cars are 12.2kg lighter, and get a gloss black roof and twin-stripe decals.

• Jaguar XE SVR: everything you need to know 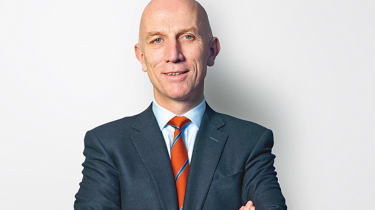 Project 8 is the second limited-edition model from JLR’s Special Vehicle Operations. The division’s boss gives some background on the new creation.

Q: Why choose the XE for the new Project car?

A: “The designers and engineers at Special Operations are always coming up with wild, crazy ideas. And the idea of the most powerful, extreme road-going Jaguar saloon ever seemed to be the craziest and the best right now. Once you decide that, then the XE makes sense, because it’s our most agile saloon and has the aluminium platform.”

Q: Did Project 7 customers have input into the idea? And will you be giving them first refusal on Project 8?

A: “We didn’t consult them directly but we do have a close relationship with them in general. And yes, I think we’ll be talking to them about Project 8.”

A: “There’s still not a lot of science in the number! But part of Project 7’s appeal was its rarity. So 300 is 50 more cars, but still exclusive.”

Q: There’s not even a ‘regular’ XE SVR at the moment. Could Project 8 legitimise that model?

A: “We have no definite plans for an XE SVR, I have to say. Who knows where we’ll be in 12 months’ time, if reaction to Project 8 is strong enough.”

What do you think of the Jaguar XE SV Project 8? Join the debate in the comments... 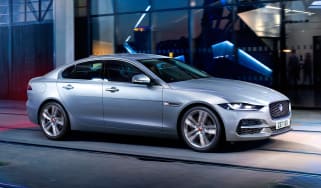