The Lamborghini Urus is one of the best performance SUVs on sale, but it comes with a staggering price tag 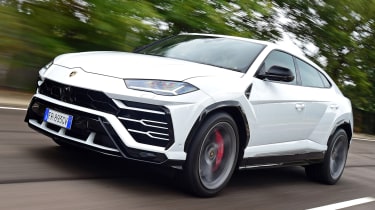 Judged for what it is, the Urus is among the very best high performance SUVs. But it comes at an eye-watering price. It hits many of Lamborghini’s core requirements – with thumping performance, a defining soundtrack and over-the-top styling. Yet in countless other ways it fails; it doesn’t feel special nor does it excite like a Lambo should. But for those thinking of ordering one, that’ll be of little concern; it has the right badge on the nose, after all.

Lamborghini can be credited with creating some of the most iconic and exciting cars in history. The Muria, Countach and Murcielago are all poster cars of their era; magnificent wedge-shaped supercars, powered by enormous V12 engines draped in sharp Italian suits.

On the surface, at least, it’s difficult to say the same about the new Urus. It’s Lamborghini’s second crack at an SUV following in the rather unsuccessful footsteps of the LM002, which was initially designed for the military back in the 1980s. The Urus has a very different brief, to help double Lamborghini’s sales figures and inflate the bank balance. Nothing more, nothing less.

The public’s insatiable appetite for SUVs, and the hefty profit margins attached to them, means Lamborghini can’t ignore the segment any longer. Here in the UK, the Italian firm expects to sell between 300 and 400 examples per year. 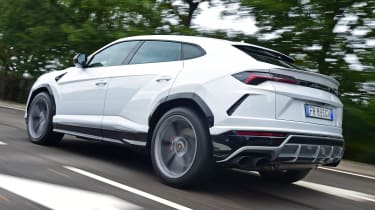 With the Urus, Lamborghini has put its position as part of the Volkswagen Group to good use. The SUV is based on a chassis that underpins the Audi Q7, while its 4.0-litre twin-turbo V8 is taken from the Porsche Panamera. The eight-speed gearbox is lifted from a VW Touareg.

Inside, Lamborghini’s rummage through the VW parts bin becomes even more evident. The instrument cluster, fuel gauges, indicator stalks and key are all borrowed from various Audi products. There is, however, ‘Lamborghini’ inscribed across the dashboard in chrome lettering just to remind you that are definitely in a something from Sant’Agata. It’s all very clean and tactile, but the sense of occasion you should get from a Lamborghini is notably inconspicuous in the Urus.

On the move, especially on the UK’s the tight and congested roads, the first thing that strikes you is how wide it feels; the Urus is longer and wider than a Range Rover. The second thing you notice, rather surprisingly, is how comfortable it is.

In its softest of seven driving modes – Strada (Italian for street) – the Urus has a suppleness to its ride quality quite unlike any Lamborghini before it. That is, however, almost entirely down to the Audi running gear beneath the skin. Our test car rode on enormous 22-inch alloy wheels, which sniff out ruts and potholes on the road, but on the whole, the Urus does a canny impression of a big, comfortable SUV.

Most Urus’ are unlikely to face more challenging terrain than a leafy side street in Surrey, but the three off-road modes – Neve (snow) and Terra (gravel) and Sabbia (sand) – should ensure it’s ready for every eventuality.

Flick it to its most aggressive Corsa set-up and the Urus undergoes a dramatic character transformation; it hunkers down to the tarmac on its air suspension, the exhaust volume is ratcheted up, and the whole powertrain takes on supercar-like aggression.

For something so big and heavy (it weighs 2.2 tonnes) the way the Urus can slingshot itself from a standstill to license-losing speeds is astounding. Lamborghini says 0-62mph takes 3.6 seconds – and it feels every bit as quick. A deep-chested bellow erupts from the quad-tailpipes as you pin the throttle. It’s obnoxiously loud, only a very different soundtrack from the high-pitched scream you’d get from one of the company’s V12s. 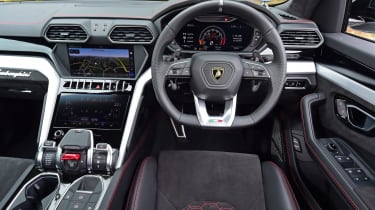 Lamborghini has thrown a whole load of tech at the Urus to make it feel like a supercar on stilts. Active rear steering, active anti-roll bars, adaptive four-wheel drive and carbon-ceramic brakes the size of satellites, all combine to help the Urus go, handle and stop as effectively as possible.

It corners remarkably flat for a car of this size and weight, while the fast steering gives the front end a sharp and alert response. Having said that, the steering is numb and short on feedback and, combined with the active anti-roll bars, make you feel oddly isolated from the driving experience.

A Porsche Cayenne Turbo, although not as quick, comes with a similar set of dynamic attributes and is over £60,000 cheaper. The inevitable Turbo S E-Hybrid plug-in will surely be faster still.

When it comes to being a large SUV, the Urus scores pretty well. The 616-litre boot is rather high, but it’s big enough for a family of four and comes fitted with luggage rails to secure loose items. Despite its size there’s only really enough space for two adults in the rear, as the aggressively sloping roofline robs you of headroom – especially if you’re over six foot.

Given the £165,000 price tag, you’re not short on luxuries inside either; leather and Alcantara trimmed sport seats, sat-nav, cruise control and a top view camera all come as standard. Night vision, a panoramic roof and a 3D B&O sound system are all on the options list.