If the Discovery carries on at this rate, it will deserve an outstanding achievement award at our next New Car Awards. 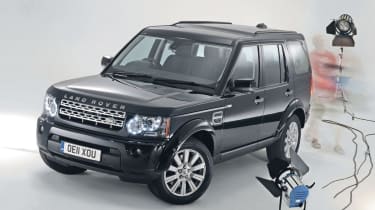 If the Discovery carries on at this rate, it will deserve an outstanding achievement award at our next New Car Awards. It has won the top prize for large 4x4s at our annual awards bash since its debut in 2005.

Then it was the Discovery 3 that wowed our panel of expert judges, and the latest Discovery 4 has maintained that momentum. The winning formula hasn’t changed much in the intervening years, but it didn’t really need to.

On the outside, its bold lines are reassuringly familiar, while its huge cabin is as spacious, versatile and practical as it has always been – few cars can accommodate seven adults in this much comfort.

The cabin is luxurious and the driving experience is better than ever this year, thanks to the introduction of a new eight-speed automatic gearbox. It makes the most of the TDV6 engine’s performance, so the Discovery 4 is cleaner and faster than ever.

You get plenty of equipment – even entry-level XS trim won’t leave you feeling short-changed. And if imitation is the sincerest form of flattery, the Terrain Response system must be as brilliant as we first thought, because rival car makers have been tripping over themselves to produce their own versions of it.

The Land Rover is hugely comfortable and relaxing to drive on the road and absolutely imperious off it, so it remains our favourite large SUV. This year sees it scoop an unprecedented eighth consecutive New Car Awards trophy – a feat that may never be repeated.

In top of-the-range trim the Discovery 4 feels like a junior Range Rover, so it’s a cut above its large SUV rivals. It comes heaving with gadgets and an opulent cabin. With only one engine/gearbox combination on offer, choosing the best Discovery couldn’t be easier.

The meteoric rise of Hyundai from worthy-but-dull value brand to mainstream contender began with the launch of the Santa Fe. So while the off-roader is one of the company’s oldest cars (and a new version is on the way), it’s still one of the best, with a mix of practicality, performance and value that takes some beating.

An off-roader with a Porsche badge was always going to be controversial, but if the original version confounded its critics, the latest model has left the naysayers looking increasingly out of touch. It’s no longer an ugly duckling and its luxurious interior, incredible agility, superb poise and strong performance in the rough justify the price.