Recently facelifted MINI Hatchback is expensive but as desirable as ever, and is still great to drive 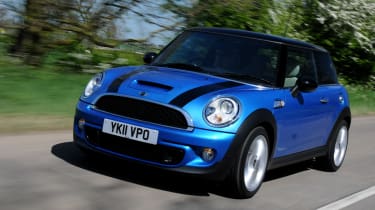 Engineered by BMW, the MINI hatchback has always been an extremely high-quality product. Its retro styling and famous badge have helped it become a huge success in the sales charts too. The latest model is better than ever, with powerful but super-efficient petrol and diesel engines and sharp handling that puts more expensive machinery to shame. Things have become tougher for the MINI of late though, with the arrival of stylish rivals like the Audi A1 and Citroen DS3.

One of the MINI's strengths is the way it drives. No matter which engine you go for, the handling is sharp and will put a smile on your face. The stiff suspension won't be to everyone's tastes, but the pay-off is huge fun behind the wheel. The One D and Cooper D models produce a tax-dodging 99g/km of CO2, but still deliver punchy acceleration, while Cooper S and John Cooper Works variants serve up the full hot-hatch experience, complete with sporty soundtrack.

Model for model, the MINI is marginally cheaper than the Audi A1, but more expensive than the Citroen DS3. MINI makes no secret of the fact that it makes a lot of money from buyers choosing optional extras, so expect to pay more than the list price once your car is specced up. On the other hand the low running costs, especially with the diesel models fitted with BMW's new 1.6-litre engine, should more than make up for paying extra cash up front, plus the MINI's residuals are rock solid. DAB radio is also standard across the range. On top-spec models sports seats, a chunky three-spoke steering wheel and air-con are standard, but most customers will need to add a few choice options.

Quirky retro styling has always been a MINI selling point - and its universal appeal to young and old, as well as male and female customers, has been the cornerstone of the car's success. A facelift in summer 2010 added a new bumper design, fresh alloy wheels and LED tail-lights, but the circular headlights and floating roof are what make the MINI so distinctive. Cooper S, Cooper SD and John Cooper Works models are distinguished by a bold bonnet scoop, while endless pensonalisation options are available. The MINI's interior is just as unique as its exterior. Taking centre stage is the huge speedometer in the middle of the dash which now houses the sat-nav screen and can also display text messages.

Despite being significantly larger than the original Mini, practicality is not a strong point. The rear bench is cramped for adults and the boot is extremely small. Even with the rear seats folded it can't match the Audi A1 or Citroen DS3 for loading space. However, if practicality is a priority, it's worth looking at other models in the MINI range - like the Clubman and Countryman.

Last tested by Euro NCAP back in 2007, the MINI Cooper achieved the full five stars for adult protection. It performs impressively in our Driver Power survey too. As it's designed and engineered by BMW, the MINI has exceptional build quality and uses high-quality materials.