After finishing 22nd overall in our 2018 Driver Power customer satisfaction survey, Vauxhall posted an even worse score in 2019, coming in at 29th position, which was pretty poor and a shame for the British brand.

With 12.3 per cent of owners reporting a fault with their car, Vauxhall actually showed better reliability than rival brands such as Renault, Ford and Nissan, with 18.6%, 14.8% and 19.5%, respectively. Vauxhall fell behind in the poll as it failed to score well in any specific category, so it will be interesting to see how it fares in our Driver Power poll once the effects of its buyout by PSA start to trickle down to drivers.

In 2017 the Insignia scored five stars for crash safety from Euro NCAP, with strong scores in every category. 93 per cent for adult protection is excellent, and 78 per cent for pedestrian safety is nearly twice as good as the previous-generation car’s score. 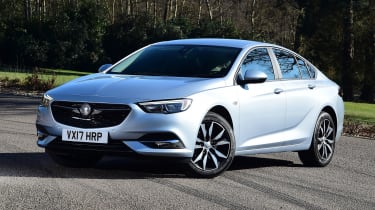 While Vauxhall's OnStar was a great selling point when the Insignia Grand Sport first launched, Vauxhall's switch of ownership from General Motors to the PSA Group means the GM-sourced tech will no longer feature in the future. However, there's still an emergency call function offered, because EU legislation has now made this mandatory on all new cars.

Vauxhall offers the industry-standard three-year warranty with the Grand Sport, limited to 60,000 miles in the last year of cover. You also get six years of rust coverage for the bodywork.

Vauxhall offers fixed-price service plans that you can pay for monthly alongside your PCP deal, if you choose to buy the car that way. There’s even a free service club you can join that gets you money off the services if you don’t have the fixed-price plan.