Can the fast and frugal GTE hybrid powertrain up the game of the already impressive Volkswagen Passat Estate? 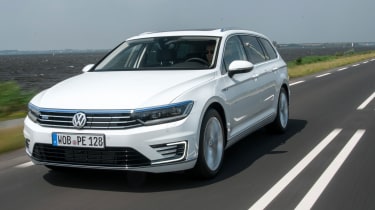 If you want a petrol-powered Passat Estate the GTE is the only option, but there is much more to it than that. Offering full-electric and full-hybrid driving modes, the GTE is a fast and relaxing way to cover ground, and a quality product. Plus, while there’s no underfloor storage, the addition of a battery pack has made little difference to the Passat Estate’s practicality. But unless you’re a company driver who enjoys a short commute and has regular access to charging points, the diesel Passat Estate models are cheaper and more flexible to own.

Up until now if you wanted a Volkswagen Passat the choice has been simple – which diesel engine would you like? Now though, VW is offering an ultra-efficient plug-in hybrid GTE version. Available as a saloon and an estate, it’s the latter we’ve driven for the first time. Beneath its conventional body lies the same technology you’ll find in the Golf GTE, so there’s a 154bhp 1.4-litre TSI engine under the bonnet. The lithium-ion battery is located under the rear bench seat while the electric motor is integrated with the six-speed DSG gearbox.

All of that clever technology adds up to a combined power output of 215bhp, 400Nm of torque and a top speed of 140mph (81mph if you’re in pure electric E-Mode), while 0-62mph takes 7.6 seconds. The total range in E-Mode is 31 miles and VW claims staggering fuel consumption of 166mpg and emissions of 39g/km of CO2, on the flawed combined cycle at least. That makes the GTE Estate London Congestion Charge exempt and there’s zero road tax to pay. 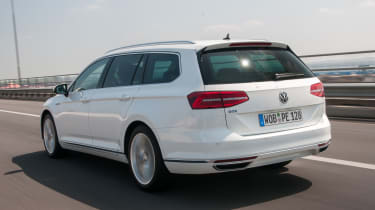 Press the starter button on the centre console and there’s complete silence, prod the throttle and the GTE glides away just like any other electric car. Once the battery’s power is all gone, the petrol kicks in and the Passat runs in full ‘Hybrid’ mode – recouping energy and charging the battery under braking or automatically charging using the engine and electric motor. The third driving mode, GTE, gives max power from the engine and electric motor and the fourth, ‘Battery Charge’, conserves the battery’s charge so its electricity can be used later on in the journey. Just like the Golf GTE, the Passat GTE switches between electric and hybrid modes incredibly smoothly – in fact the petrol engine starting up and kicking in is barely noticeable. There are a number of different driving modes, too - ranging from ‘Eco’ through to ‘Sport’, but the Passat always feels most in its element in ‘Comfort’. 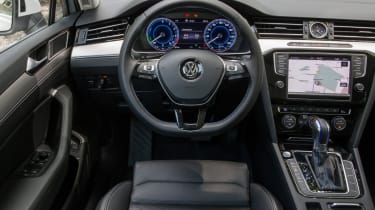 While the name ‘GTE’ may indicate sporty intentions, just like the Golf GTE the Passat is just a quick hybrid –  not an eco GTI model. On the move we found ourselves using the E-Mode and Hybrid modes for a relaxing and quick drive – the combination of the petrol and electric motor give impressive straight-line acceleration. The accurate but slightly numb steering and soft suspension (though stiffer than the standard car, the GTE still rolls in bends) means enthusiastic driving is not all that pleasurable, and the brake pedal doesn’t have a particularly consistent feel – we often found ourselves slotting the gearlever into ‘B’ to make use of the GTE’s strong regenerative brakes.   Due to clever packaging the battery pack doesn’t eat into boot space, so the GTE gets the same 650-litre boot meaning it’s one of the roomiest in the class (beating the 525-litre Ford Mondeo and the Mazda 6 Tourer with 506 litres) that expands to 1,780 litres with the seats down. While there is now no underfloor compartment in the boot (that’s where the fuel tank has been moved to) there’s still loads of rear legroom and headroom is generous too, meaning the GTE still makes a practical proposition for families. 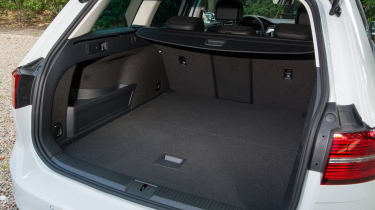 Apart from the ‘C’-shaped LED day-running lights, thin blue strip in the radiator grille, 18-inch ‘Oxford’ alloys and blue brake calipers, the GTE looks like any other diesel-powered Passat estate. It’s much the same story on the inside – apart from some blue stitching, classy blue ambient lighting and electric power consumption menus on the eight-inch touchscreen, little has been changed.

Standard kit is good though – the entry GTE is based on the Passat Estate GT diesel models so there’s adaptive cruise control with city emergency braking, sat-nav, Bluetooth, parking sensors and LED headlights. The higher-spec GTE adds an eight-inch touchscreen sat nav, Nappa leather upholstery and a 360-degree parking camera. Prices have yet to be confirmed for the UK, but the entry-level GTE estate should cost around £35,000 after the £5,000 government grant.