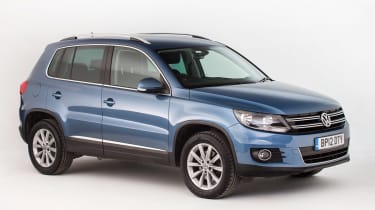 It’s not the most exciting car, but the Tiguan provides a generally painless ownership experience. We ran a 2.0 TDI for over 15,000 miles and 12 months, and it proved a hit. Capable of over 40mpg (some owners get 50mpg-plus), the Tiguan impressed with its high-speed refinement, classy cabin and excellent practicality. But there are cheaper compact SUVs that are also fine used buys. Still, the VW is easy to recommend if you’re not heading off road; while it’s a talented car, it’s better when driven on the tarmac.

Volkswagen didn’t rush to build its first SUV, but when it did – in the shape of the Touareg, which reached dealers in 2003 – it hit the spot. The Touareg was a big car, though; the brand needed something smaller and more affordable to make an impact with 4x4 fans. That’s just what it did with the Tiguan, which arrived here nine years ago.

In typical VW fashion it featured a rather conservative design inside and out, plus it wasn’t much fun to drive. Yet it was well built, easy to live with and came with some fine engines and transmissions, which is why it proved a hit. The original was replaced in 2016 by a new car, but now a Mk1 Tiguan can be yours from £6,000.

The Volkswagen Tiguan first appeared in 2008 and was on sale for eight years before behind replaced by the second-generation model in 2016. It’s the original Mk1 that we’re focusing on in this review. 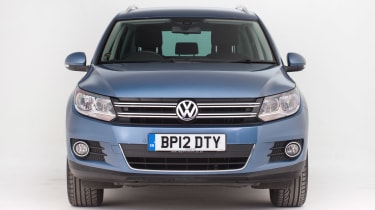 There were initially S, SE and Sport trims; R-Line was added in April 2009 and Match replaced SE in May 2010. Meanwhile, Escape models were more capable off road; they had underbody protection, hill descent control and a revised nose for a steeper approach angle.

Most Tiguans are diesels, and you want one of these if you’ll be towing; just ensure any purchase has had the diesel emissions fix carried out. But don’t overlook the petrol engines; they’re not too thirsty and cost less to service (even if road tax bills are higher). 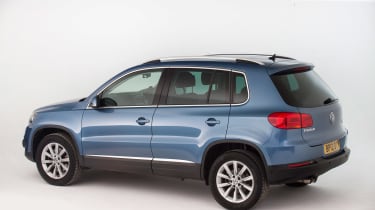 The factory-fitted integral hitch works brilliantly if you’re towing; other desirable options include a panoramic glass roof and DSG semi-automatic transmission, although the manual gearboxes are more durable.

Alternatives to the VW Tiguan Mk1

The market is awash with compact SUVs, and the Renault Kadjar was the highest-rated in our latest Driver Power satisfaction survey. But because the car only launched in 2015, prices start at £14,000. 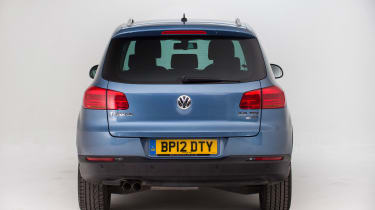 The Subaru Forester (2012 on) was the next best ranked model, finishing eighth overall thanks to its reliability, build quality and practicality. Skoda’s Yeti came first or second in the survey five times in a row so it’s a brilliant all-rounder; it dropped to 16th in 2016. For value it’s hard to beat the Ford Kuga, which is good to drive and in plentiful supply; Mazda’s CX-5 shares these attributes. Also consider the Toyota RAV4, Honda CR-V, Kia Sportage, Nissan Qashqai and Hyundai ix35, which are fine choices.

The power steering can fail, especially in sub-zero temperatures. A control unit failure is usually to blame, but it can be the steering rack itself.

The electronic parking brake can refuse to release. This can be because the driver’s seatbelt isn’t latched, or the clutch isn’t fully depressed. 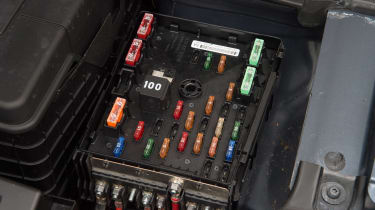 Faulty electrics can be down to damaged fuseboxes, which have been known to melt because of the high currents being passed through them.

Check that the air-conditioning or climate control works properly. If not, it may be due to switchgear failure rather than the compressor.

Not only is the Tiguan’s cabin as conservatively designed as you expect from a VW, it’s also easy to use, comfortable and feels durable. Space in the rear is good; the rear seat slides back and forth for added versatility. Boot capacity stands at 505 litres with the seat up or 1,510 litres when it’s folded. 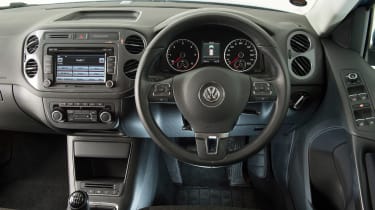 A new cambelt is needed on all diesels every five years or 130,000 miles, for £434; petrol engines are chain-driven. Fresh brake fluid is needed after three years then every two years, at £64, while coolant is checked every service and topped up as necessary; there’s no schedule for replacement. A biennial air-con service costs £80.

The Tiguan has been recalled four times. The first, in July 2008, related to an electrical short circuit in the auxiliary cabin heater on diesels. Then in December 2011, 2.0 TDIs built from 2009-11 were recalled over a potential fuel leak.

Failure of the child door lock mechanism on Tiguans produced between November 2015 and April 2016 led to a further recall in June 2016. And last month, VW called back examples built from August to October 2016 because of the risk of the front seatbacks failing in the event of a collision. On top of this, check that 2.0 TDI models have had the diesel emissions fix.