The Volkswagen up! is now available with a 1.0-litre turbo petrol engine, but how does it drive? 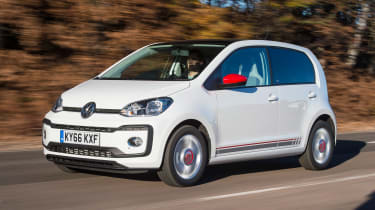 The addition of the new TSI petrol engine boosts the VW up!’s already excellent range of talents. It stops short of being sporty, but answers the demands of those who want a city car capable of longer journeys. Its great refinement is a boon for motorway trips, and the slight efficiency losses are a small compromise. However, it’s only a matter of time until the cheaper Skoda Citigo receives the same powertrain – while a pokier up! GTI will also arrive next year.

Most mainstream manufacturers offer some sort of turbocharged engine nowadays – yet many city cars still abstain from the march of forced induction. Even the latest offerings such as the Ford Ka+, facelifted Hyundai i10 and Vauxhall Viva only offer naturally aspirated petrol engines. Volkswagen has finally bucked the trend, however, with the new up! TSI.

Don’t get too excited – this isn’t a production version of the turbo-boosted up! GTI prototype. It uses the same 1.0-litre three-cylinder unit as that car, yet power is pegged at 89bhp rather than 114bhp. That means a sprightly but not fast 0-62mph sprint of 9.9 seconds. That’s just over a second slower than the GTI prototype – but crucially more than three seconds quicker than the 74bhp non-turbo up!. 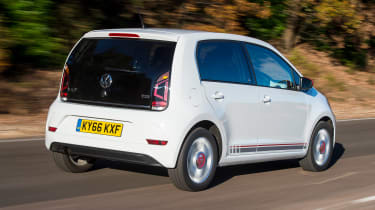 However, as is often the case with forced induction engines, the up! TSI feels punchier than that figure suggests. Unlike most of its kind, though, the up!’s power delivery is surprisingly linear, with plenty of power all across the rev range and very little lag.

It’s a flexible rather than sporty powertrain, with a pleasing yet subdued engine note making it even more refined than the standard car. The five-speed gearbox isn’t too much of an issue, and the quiet engine complements the already impressive absence of wind and road noise. In fact, it’s ideal for up! owners who intend to venture out of town and on to the motorway. 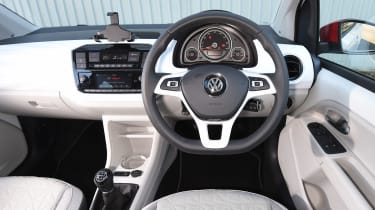 There’s a slight efficiency penalty to stomach with the turbo version, though. Claimed combined fuel economy drops from 64.2mpg with the naturally aspirated car to 60.1mpg, while CO2 emissions climb from 101g/km to 108g/km. That latter figure is still within the same tax band, however, so you won’t pay any more road tax – though some may find the drop in fuel economy to be steeper in the real world than it is on paper.

There are no changes to the chassis of the up! TSI compared with the standard model. That shouldn't be a cause for concern, though, as the extra power is rarely enough to overwhelm the front wheels, and although body roll is noticeable the controls are nicely weighted and grip is strong. The ride is as impressive as ever, which is as smooth and well-damped as many models costing twice the price.

The rest of the facelift revisions for the up! range, including the tweaked looks and interior upgrades only serve to improve the package. Our test model was a ‘Beats’ special edition, which alongside decals and coloured trim sections features a punchy 300 watt Beats sound system with a subwoofer in the boot.

It’s the cheapest trim level you can have with the turbocharged engine, so if you’d rather do without the styling add-ons and flashy stereo you’ll have to spend another £700 on the top-spec High up! model.