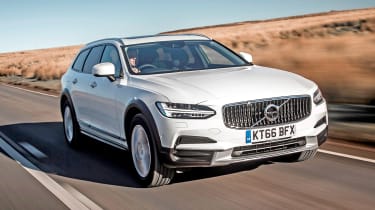 The Volvo V90 Cross Country remains a handsome, practical and well equipped family car, but the 2.0-litre T6 engine doesn’t show it in its best light. The engine makes the model quicker than it really needs to be and as a result it’s not very efficient; better value for money can be found with the diesel D4.

Consumer confidence in diesel is lower than it’s ever been, so the launch of a new T6 petrol engine in the Volvo V90 range couldn’t have come at a better time.

There is a slight snag, though; the company doesn’t offer the 2.0-litre unit across the range, so the only way to get one is by splashing out more than £50,000 on the Cross Country model. That’s not an insignificant sum when you consider that the V90 CC line-up starts at £40,640 for the basic all-wheel-drive D4 diesel.

The T6 engine is intriguing because it’s a 316bhp 2.0-litre four-cylinder, which is both turbocharged and supercharged. The benefit of twincharging, in theory at least, is the instant power delivery of a supercharger and high-end shove of the turbo – resulting in a seamlessly smooth engine. The reality is rather different, however.

From start-up and at low speeds, the engine is incredibly quiet, but squeeze the throttle and there’s a noticeable delay before the eight-speed auto gearbox shifts down and you gain any momentum. When you do it’s deceptively quick for a car of this size and weight – with the competent all-wheel-drive system helping to slingshot you from 0-62mph in 6.3 seconds.

Once up and running, performance may be impressive but economy certainly isn’t; Volvo claims just 36.7mpg for the Cross Country T6 model, but you’ll be doing well to get above 30mpg in normal driving. The cheaper D5 will do a claimed 53.3mpg – and with lower CO2 emissions, too.

The £1,500 optional Air Suspension does a great job of cushioning the ride, but the wheels thud into potholes and expansion joints, sending a jolt through the cabin.

The V90 Cross Country has a beautifully crafted interior and ours even featured the brilliant Bowers and Wilkins sound system – although at £3,000 it’s an expensive extra.