Audi's smallest SUV kicks off from £22,380 with a 148bhp petrol engine, while Edition 1 launch special is announced 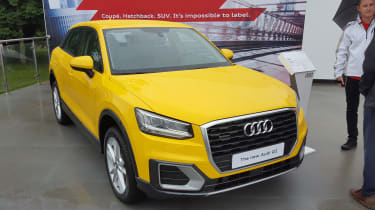 After UK prices and specs were announced for Audi's new Q2, the SUV is now available to order from showrooms.The small crossover starts from £22,380 with a 148bhp 1.4-litre turbo petrol engine, capable of 0-62mph in 8.5 seconds and 54.3mpg combined.

A 1.6 TDI is also available in this entry-level trim, with 114bhp and a claimed average fuel economy figure of 64.2mpg. Towards the end of this year The Q2 will get an even cheaper starting point, as the 113bhp 1.0-litre TFSI petrol debuts kicking off at £20,230.

An additional £2,250 over Sport trim gets you S line, which adds styling additions, larger 18-inch alloy wheels, LED head and taillights and brushed aluminium inlays in the interior. From next month buyers can also opt for 'Edition 1' spec, which gets unique grey paint with contrasting darker body sections, 19-iincch alloys and a black styling pack. Insider, there's contrasting stitching in the leather upholstery. 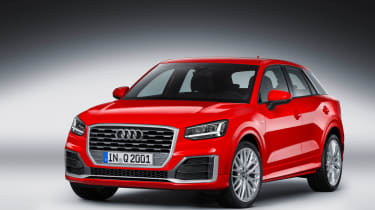 The Q2 range tops out for the moment at £30,610, which will buy you a 148bhp 2.0-litre TDI with quattro all-wheel-drive, in range-topping S line trim. Next year a 187bhp 2.0-litre TFSI peterol will also debut, exclusively with four-wheel drive and an S-Tronic autobox.

With its 'floating blade' C-pillar, plenty of colourful trims and finishes and a youthful market to appeal to, the Q2 is what Audi describe as a Trojan Horse - introduced to get new customers into the brand and used to buying Audis. Those customers will have a choice of four engines - 1.0 and 1.4-litre petrols, and 1.6 and 2.0-litre diesel engines, with power outputs ranging from 113bhp to 148bhp. There will be a choice of six-speed manual of 7-speed dual clutch automatic gearboxes.

Fortunately, there's a hot model in the pipeline, as an engineer let slip on our exclusive preview event. We're expecting both 'S' and 'RS' models to come, both with highly tuned turbocharged engines, although there's no indication yet if the storming RS 3's 362bhp five-cylinder can fit in the Q2.

The Q2 also gets the option of variable damping, with a 10mm lower sports suspension kit available too. All cars get a variable steering ratio, and there's five driving modes including an off-road mode. That raises the ride height to 200mm and adjusts the drivetrain for rough surfaces.

As our Geneva show gallery reveals, styling influence is drawn from the Crosslane Coupe concept displayed at the 2012 Paris Motor Show, but the design has matured from a two-door SUV coupe to a swoopy five-door in that time. It’s the first car overseen and signed-off by design boss Marc Lichte, who joined in 2014 and has been relishing the chance to truly make his mark on one of the brand’s models. 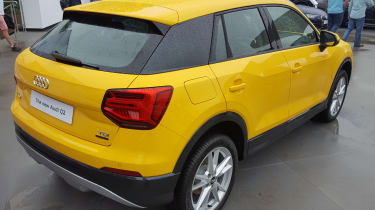 The Q2 is 4.19m in length (around 12cm shorter than the A3), 1.79m wide and just over 1.5m tall (10cm shorter than the Q3).  It also weighs from a relatively light 1205kg. It’s still unmistakably an Audi in profile, but the Q2’s overall design brief was to join the A1 in attracting a younger clientele to the carmaker.

The broad shoulders, sloping roofline and short rear overhangs are crucial to this, as will design details like the hexagonal cutout along the car’s waistline, the ‘blade’ floating C-pillar and striking bonnet lines. The grille remains the same shape, but uses fresh ‘egg-crate’ slats to give it extra personality.

Colour schemes will also be an essential part of creating the youthful image Audi is after. There will be 12 body colours offered at launch, a well as a big list of options for customisation inside and out including a two-tone roof and coloured dash inserts. It’s been specifically designed to counter criticism that all Audis come in dour greys, blacks and blues. 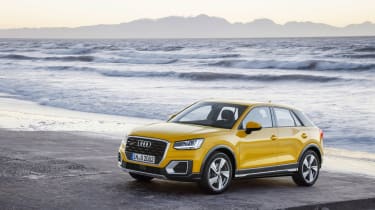 Options on UK cars will include painted bumpers and blades, 16 to 19-inch alloy wheels, interior inlay colouring and contrasting piping on the seats. There will be a choice of cloth, alcantara and leather for the upholstery, too, and you can specifiy the new Audi Virtual Cockpit as seen on the new A4. Other interior options focus on younger buyers, such as the wireless phone charger, smartphone connectivity and Bang & Olufsen stereo system.

Exterior design head for the Q2, Gary Telaak, told Auto Express that a junior designer drew up a sketch of the five-door model, and when the Audi board of execs came across it they said “we have to build this”. However, he also talked of a “constant struggle” between the design and quality control department to ensure that the more surfaced exterior of the Q2 could “pass stringent metal pressing standards”. The designers were determined to not see their creation watered-down in any way.

Step inside the cabin and things are a bit more familiar. It’s similar in overall look to the current A3, but also incorporates the latest multimedia tech from the new A4, including the optional 12.3-inch Virtual Cockpit display replacing the standard dials. A standard 5.8-inch MMI central infotainment screen sits atop the dash, while the upgraded system brings an 8.4-inch unit. Both are controlled via the familiar rotary dial. The Q2 also gets a unique LED ambient lighting system that sees light projected through the panel gaps in the dash, with different designs for day and night. 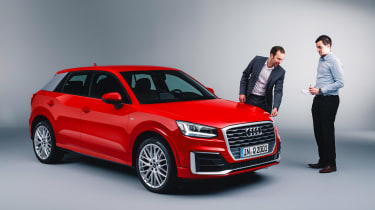 Space hasn’t been neglected in the Q2’s desire for style. There’s reasonable space for four adults in the back (even a six plus-footer as our images show), although the 405-litre boot is quite a way behind the 481-litres offered by the Mercedes GLA. Audi makes the most of the space with the option of a 40/20/40 split-folding seat.

*available later in the year.

What do you think of the new Audi Q2? Let us know in the comments section below...

Welcome to our Geneva Motor Show hub page, scroll down for all our Geneva content...
Audi Q2 review 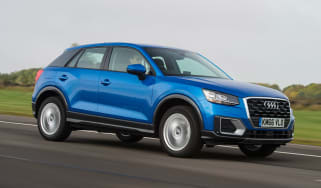 The Audi Q2 crossover brings style, class and big-car features to the small crossover class, but at a cost
Audi Q2 SUV given minor facelift for 2020 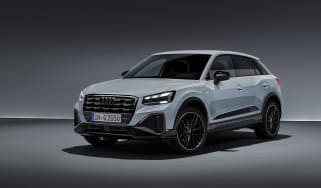