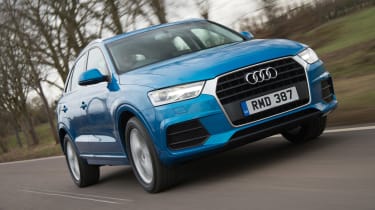 It's hard to ignore the fact that the Q3 is starting to age in Audi’s modern line-up, but this update will help to extend the car’s life. While the visual facelift is handsome, it’s the new 1.4 petrol which is bigger news. Smoother, quieter and nearly as punchy as a diesel, it will be cheap to run for private and company car buyers.

After four years and over 400,000 worldwide sales under its belt, the Audi Q3 has been given a mid-life refresh. But with a new BMW X1 arriving later this year, has it done enough to keep its newly sculpted nose in front?

The main visual change is the addition of an imposing 3D-effect Singleframe grille, complete with extra chrome trim that blends with new xenon headlamps. There’s a new daytime running light design, while new, colour-coded bumpers and wheelarches also debut. To the rear, the bumpers have been reprofiled and the LED tail-light clusters now get ‘scrolling’ indicators. 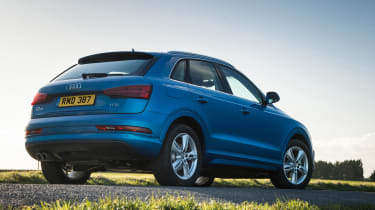 All engines in the existing range – a 2.0-litre TFSI petrol and two 2.0-litre TDI diesels – have been tweaked to provide more power and be kinder to your wallet, while the choice of front or four-wheel drive remains. A new 1.4 TFSI turbo petrol with cylinder-on-demand tech has been added, too, and it’s this engine we tried for the first time in the UK.

Available with front-wheel drive only, the 1.4-litre boasts 148bhp, claims 47.9mpg economy and emits 136g/km of CO2. Under part-throttle, two of the four cylinders shut down to help save fuel; but, squeeze the throttle, and the cylinders fire back up so smoothly you’d never know two of them were taking a rest. Push your foot down, and 0-62mph in a swift 8.9 seconds is possible. 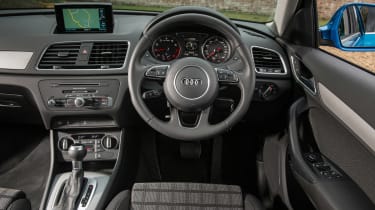 Drivers after some thrills in bends should look towards the X1, as the Q3’s steering isn’t the last word in precision or feel. Overall, though, the Audi is a highly refined car – especially on the motorway – and spacious inside, too.

One complaint of the old Q3 was a poor ride, but fine-tuning the suspension has improved things noticeably. Audi’s drive select system is now fitted as standard, too, letting you tailor how aggressive the car’s reactions are.

Rear passengers will enjoy good knee and headroom, plus there’s 420 litres of space in the boot. Fold the rear seats down, and the capacity swells to 1,320 litres – just 30 litres shy of the X1’s. 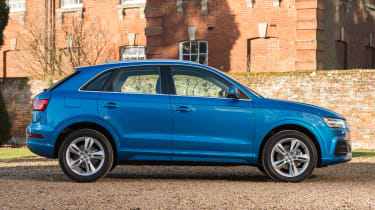