The all-new BMW 5 Series has arrived, and we get behind the wheel to see if it can compete with the best executive cars on sale

With more than forty years of development under its belt, the 5 Series just gets better and better. This latest model is a technical tour de force, plus it delivers class leading refinement and comfort. Yet like all BMW models, it’s surprisingly efficient and great to drive. We’ll have to wait until we get the car in the UK for our definitive verdict, but on this showing the executive car class has a new king.

For more than 40 years, the BMW 5 Series saloon has been battling it out at the the top of the executive car class. Yet recently, the current version has began to show its age and has been overtaken by newer rivals from Mercedes, Audi and Jaguar.

However, BMW isn’t taking this lying down and has pulled the covers off an all-new, seventh generation version of its popular 5 Series saloon.

Not only is the new 5 Series faster, lighter and more efficient than ever, but it’s loaded with top-shelf tech and promises to rival larger luxury cars for comfort and quality. Plus, bosses claim that the combination of a crash diet and sophisticated chassis upgrades make the 5 Series almost as agile as the smaller 3 Series saloon.

So then, BMW has set a tall order for itself and the new 5 Series. We got behind the wheel of one of the first examples in Portugal and gave it a thorough workout on some challenging roads. The 520d is tipped to be the biggest seller, but the only diesel car available on this early launch was the bigger, six-cylinder 530d. 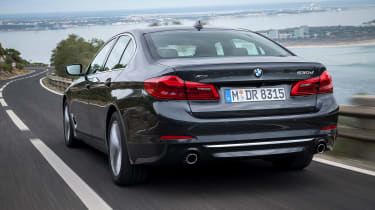 Step up to the newcomer and it is clear BMW has taken no risks with the design. In such a conservative sector it’s clear that the design mantra within the firm was ‘evolution not revolution’. It’s handsome and beautifully proportioned, but many of the visual cues have been carried over from the previous car.

There are some neat details, though. Like on the 3 Series, the distinctive LED headlamps now flow into the large double kidney grille, plus the car’s sheet metal features more eye-catching curves and creases. These additions help hide the car’s bulk, and despite being 36mm longer and 6mm wider than before, the 5 Series looks no bigger than its predecessor. It’s aerodynamic, too, with entry-level models delivering a stunning low drag coefficient of 0.22Cd.

Our Luxury trim test car won’t be available in the UK, but visually and mechanically it’s virtually identical to the SE that will be the big seller here. Buyers wanting an injection of racy appeal can choose the M Sport model, which adds deeper front and rear bumpers, subtle side skirts and larger 19-inch alloys. 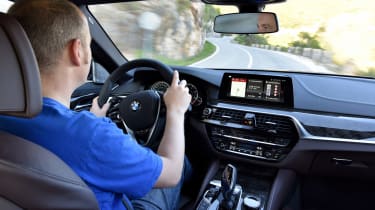 Yet while the exterior of the 5 Series is fairly conventional, under the skin there have been big changes. The basic platform is shared with the flagship 7 Series, but without that model’s expensive carbon fibre core. However, extensive use of aluminium for the structure, body panels and suspension means the newcomer weighs around 100kg less than the old car.

These weight-savings combine with the double wishbone front suspension and new five-link rear axle to give the 5 Series more alert and agile responses than both its predecessor and its immediate rivals. The BMW’s crash diet also helps boost performance.

Our test car was fitted with the heavily reworked 3.0-litre six-cylinder diesel, which features an uprated version of the brand’s Twin Power variable geometry turbo technology. As a result, it pumps out 261bhp and a thumping 620Nm of torque, which is available from just 2,000rpm. In combination with our-car’s grippy xDrive all-wheel drive system it allows the 530d to rocket from 0-60mph in just 5.4 seconds, which is three-tenths faster than the standard car. 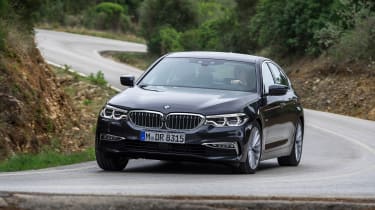 Yet it’s the engine’s muscular mid-range that impresses the most. It doesn’t matter what gear you’re in, simply squeeze the throttle and the 5 Series lunges forward as if fired from a giant elastic band. The impression of speed is heightened by the standard eight-speed gearbox. It smoothly slurs ratios in auto mode yet delivers rapid fire shifts via steering wheel paddles when you’re in the mood for fun, which is likely to be a regular occurrence when you're behind the wheel of the 5 Series.

Turn into a corner and the BMW responds quickly to the light and accurate steering, while strong front-end grip allows you confidently lock onto your chosen line. This nimble nature means that before long you’ve forgotten about the 5 Series’ imposing dimensions and are throwing the car through bends with the sort of enthusiasm normally reserved for much smaller machines.

Our car’s acrobatic agility was further enhanced by its optional £995 Integral Active Steering set-up, which is available with xDrive four-wheel drive for the first time. This electronically controlled set-up that turns the rear wheels in opposite direction to the fronts significantly boost manoeuvrability. At higher speeds the rears point the same way, sharpening turn-in and boosting stability. 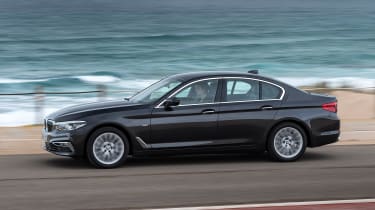 All BMW 5 Series models get the familiar Driving Experience Control that gives you access to Comfort, Sport and ECO PRO modes - each tailoring the steering and throttle response to suit conditions and your mood.

Our car was also fitted with optional £985 adaptive dampers, which tense up or soften off depending on your chosen setting. Add this upgrade with the enhanced Professional infotainment system and you’ll also unlock the Adaptive mode. This clever set-up constantly monitors your inputs to deliver the appropriate responses, plus it uses the sat-nav to prime the car for upcoming hazards, such as sharp bends or junctions. It works so smoothly that you’re barely aware it’s pulling strings behind the scenes.

Of course, the 5 Series is as likely to be cruising up and down motorways or crawling along in the daily commute as it is blasting down back roads, so refinement is as important as razor sharp response.

With optional adaptive dampers the 5 Series takes most bumps in its stride. In Comfort mode the suspension is supple, while even the firmer Sport setting does a fine job of smothering imperfections. Yet while BMW has worked hard to reduce unsprung mass, the 5 Series’ large wheels occasionally crash violently into potholes. 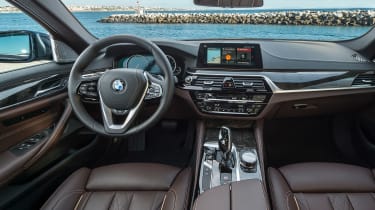 In all other respects, the BMW is impressively quiet, and in most situations there’s little to choose between it and the range-topping 7 Series. Part of this hushed character can be attributed to the brand’s SYNTAK technology, which essentially encases the engine compartment in soundproof material. At idle the 3.0-litre diesel is virtually silent, and even when worked hard it emits little more than a muted growl.

Wind noise is also almost absent, thanks to both the impressively slippery aerodynamics and the special acoustic glass. In fact, only coarse road surfaces disrupt the air of calm in the 5 Series, with some road roar filtering into the cabin.

The car’s upper class ambience is further boosted by its exquisitely finished cabin, which oozes premium appeal. Top notch materials are used throughout and the build quality is easily a match for Audi and Mercedes. A wide array of trim inserts and leather seat finishes allow you to create an even more bespoke feel.

Like in all BMW saloons, the driver sits low, while the 7 Series-inspired wraparound dashboard and TFT dials place you firmly at the centre of the action. As you’d expect from BMW, the layout of the controls is spot on, while the switchgear operates with crisp precision. 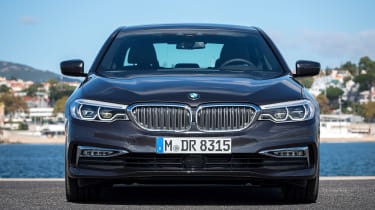 Highlights include the latest infotainment system that uses a large 10.25-inch screen mounted on top of the dash. As before you can use the trademark rotary controller to access all the functions, but the set-up also gets an upgrade of the gesture control tech first seen on the 7 Series. By simply waving your fingers and hands in front of the centre console you can adjust the stereo volume, access various menus, accept incoming phone calls and much more besides. On the whole the £160 option works well and is very rarely confused. However, we’d expect Apple CarPlay to be standard, and not a £235 extra.

Other hi-tech additions include the BMW’s most advanced autonomous driving set-up yet, which has the ability accelerate, brake and steer the car at speeds of up to 130mph. It works remarkably well, but it does require you to keep reminding it that you’re awake and paying attention.

Of course, you can always ask another human being to take control and relax in the back seats. The 7mm stretch in wheelbase means the 5 Series is now up with the best in the class for rear seat legroom, while the capacity boot has increased by 10-litres to 530-litres – although the load bay is hampered by some awkward intrusions.

Prices for the new 5 Series start at £36,025 for the 520d SE, rising to £49,945 for the flagship 540i xDrive M Sport. However, a large majority of 5 Series sales will go to business users, who demand low emissions for reduced benefit in kind bills. The newcomer isn’t quite as clean as the Mercedes E-Class, but the 520d emits just 108g/km and promises 68.8mpg at the pumps. Even the rapid, four-wheel drive 530d driven here claims 132g/km and an impressive 56.5mpg.