With a legendary roster of fabulous performance cars in its illustrious history, here's our pick of the M power crop... 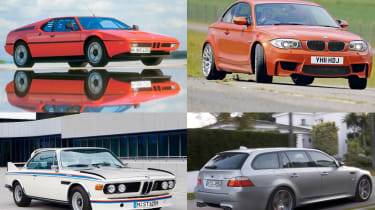 The BMW M badge is one of the icons of the performance car world, thanks to generations of superlative handling and accelerating road cars like the BMW M3, the BMW M5, and of course the original BMW 3.0 CSL and BMW M1.

In fact, all three of those M cars have the history and credentials to become performance icons in their own right, but they’re by no means the only machines to be touched by the M magic.

The latest new M Car from BMW is the all-new M2 Coupe, which has launched to rave reviews. Plenty more mundane machinery has gained a little bit of extra showroom appeal – and of course driver appeal - through the application of BMW M Sport badges, too.

Cars like the BMW 1 Series M Sport may not be the ‘full Monty’ but it - and all the other BMW M Sport cars - help to keep the M legend front and centre in enthusiasts’ minds.

They’re not for ‘M Power’ purists though, so for the lovers of the genuine article, here’s our top 10 list of the best BMW M cars ever made: 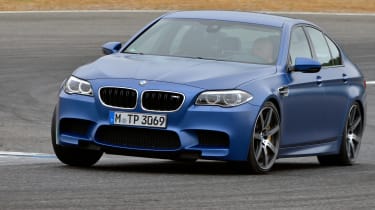 A short history of BMW M

BMW M was originally set up as the Bavarian brand’s motorsport arm (M stands for Motorsport) in 1972 and quickly got down to business with its first car, the 3.0 CSL. The CSL’s success on the track drove the decision to extend the M brand into the production car arena with the M1 supercar launched in 1978. That began the M series of production cars that’s become a fixture at the top of BMW’s model lines today.

Models like the BMW M3 and M5 have become synonymous with the cutting edge of road car performance over the years with the M division engineers taking conventional BMW saloons and working their magic to produce power-packed machines that are perfectly at home on road or track. 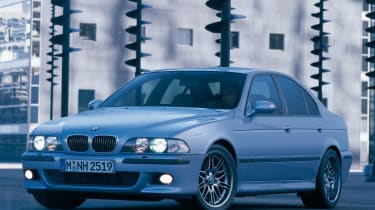 There’s always been diversification from that core range too. M Roadster and M Coupe arrived in 1998 bringing M expertise to smaller sports cars and the M6 gave sharper teeth and a stonking V10 to BMW’s 6 Series grand tourer in 2005. The Z4 M Roadster and Coupe models were introduced in 2006 for a short production run and the 1 Series hatch finally got a proper M car derivative in 2011 in the shape of the 1M Coupe.

In more recent years, BMW M has spread its wings further with the X5 M and X6 M, performance versions of BMW’s large SUVs and the switch to even-numbered naming for BMW’s smaller coupes has brought us the M4 and, most recently, the M2. With these M-badged SUVs, BMW's M division has branched out into the realm of four-wheel drive after staying loyal to the usual rear-wheel drive layout. Even the latest M5 gets four-wheel drive and the upcoming M3 is touted to power all four wheels, too.

We also now have a clutch of M Performance models that aren’t quite the full BMW M car ticket but still offer a flavour of that uncompromising, driver-focused nature. The M135i and M235i do the job in the 1 Series and 2 Series ranges respectively while the mighty X5 M50d and X6 M50d bring crushing diesel performance to the SUV sector. These days there’s even an M760Li version of the 7 Series saloon for the ultimate blend of luxury and searing M car pace.

Which is your favourite BMW M car? Join the debate in the comments section below...