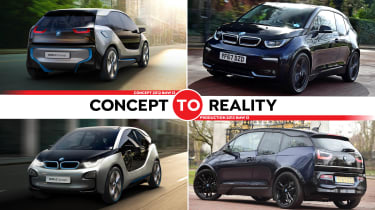 Concept cars can excite us all, showcasing models that are coming soon, or merely ideas that could still be 20 years in the future. But occasionally they are used to help gauge how big a leap the buying public is prepared to make.

We’re highlighting such a litmus test in our latest episode of Concept to Reality. For while there are few differences between the BMW i3 Concept and the production model that followed it, at least one tweak was instigated not by production considerations or profit margins, but by what potential customers told the brand they were willing to buy.

The BMW i3 is now pretty much the oldest model in the manufacturer’s line-up. But when the car was conceived, it represented a huge leap of faith by the firm. The premise behind BMW’s thinking was that the world was (and still is) heading towards domination by huge cities, where more and more of us live in close proximity to each other.

Conventional combustion-engined cars are destined to struggle in this situation – or be legislated out of it altogether – so BMW wanted to create a model that would get around this, while still appealing to its brand devotees.

Enter the Mega City Vehicle, or the i3 Concept as it was known by the time it made its global debut at the 2012 Los Angeles Auto Show. This pint-sized, four-seat model had a small footprint, a novel approach to sustainable construction and materials, and a focus on efficient powertrains – a pure-electric version, plus a range-extender variant.

The concept car attracted huge attention, not least because it represented one of the first serious electric vehicles from a major premium manufacturer, plus an innovative method of construction and use of carbon fibre. BMW made great play on its investment in the lightweight material, even flying journalists out to visit the joint-venture factory in Moses Lake, USA, where it would be produced using clean hydroelectric power. 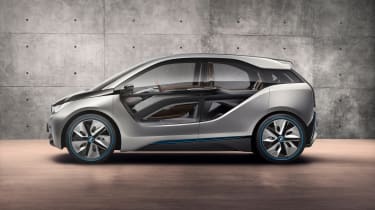 But when the Bavarian company came to putting the proposed production version of the i3 before customer clinics, it hit a small glitch. It had confirmed a five-door configuration, and the concept’s transparent lower doors were still technically feasible, because of the carbon-fibre passenger cell construction. Except that people whom the manufacturer surveyed at this stage of the model’s development simply didn’t feel comfortable with the road being visible beside them.

It was a similar problem to the one faced by Boeing and the design of the 787 Dreamliner aeroplane, whose construction actually allows for larger windows that are able to let in more light – but which made passengers feel uncomfortably exposed during clinics.

And so for production, the i3 gained conventional panel doors, albeit with a signature ‘dip’ alongside the rear passenger, a nod to what could have been possible but also a way of brightening up the cabin.

The ‘suicide-hinged’ rear doors have remained throughout the car’s life. While they are a novel design element, it’s one that affects the accessibility when the i3 is parked between other vehicles.

What didn’t change so much was the car’s interior, because designer Richard Kim’s vision of a lounge-like cabin was carried over from the concept model with remarkable precision. Indeed, cabin treatments available at the i3’s launch included ‘Loft’, ‘Lodge’ and ‘Suite’, with materials such as recycled carbon- fibre off-cuttings, hemp and eucalyptus on board.

BMW had ambitious plans for the i3; the carbon fibre plant in Moses Lake, Washington, had the capacity to expand fourfold and match the entire global production figure of the material. But the production car’s relatively high price came up against early consumer resistance to the idea of pure-electric motoring, so the planned ramp-up in production was quietly put on hold.

Even so, the i3’s interior continues to be among the freshest on the market. And the techniques learned in translating the i3 Concept into the vehicle that is still on sale today (in improved form, with much-extended range) will continue to play a role in BMW’s future models, including the next range of i vehicles, for many years to come. You would also assume that customer feedback on transparent body panels will continue to be a part of the process, too.

Check out the Citroen C4 Cactus' journey from concept to reality here...