We look at the best cars of SEMA 2017 in Las Vegas – one of the world's biggest aftermarket car gatherings. 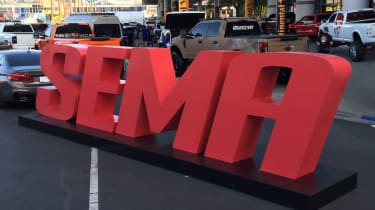 This year’s annual SEMA Show has kicked off in Las Vegas, USA. It runs from 31 October to 3 November 2017 and is one of the biggest aftermarket car shows in the world. In amongst the tuned hot rods and lowered muscle cars there are a number of manufacturer debuts – with big brands like Honda, Ford and even BMW putting in an appearance.

The SEMA (Speciality Equipment Market Association) Show is a trade event aimed mainly at small businesses, but that hasn't stopped some of the biggest global brands crashing the party. It specialises in aftermarket tuning, with everything from exhausts and bodykits to full cars and trucks. Over 500 companies exhibit at SEMA, coming from far and wide to to showcase their brand-new products.

The show is only available for traders, therefore the public aren't allowed in, but don't despair, as below we have a list of the latest cars that have been revealed at the show. 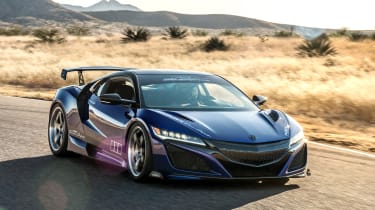 Honda's luxury American offshoot Acura has showcased a special edition "Dream Project" NSX at this year's SEMA Show. Acura has teamed up with ScienceOfSpeed, a tuning company from Arizona that specialises in modifying Honda's, to premiere the NSX Dream Project.

Power from the standard NSX's 3.5-litre twin-turbo V6 hybrid has been increased to 602bhp, while torque is up to 687Nm. Forged alloy wheels and a lowered ride height helps separate the ScienceOfSpeed NSX from the showroom model. Should you approach a speedbump, the Arizona tuners have developed its own automatic sensing suspension system called iLIFT, which raises the front of the hunkered down car by 51mm when it detects obstacles.

The Dream Project NSX debuts alongside a range of Acura Motorsport cars such as the NSX GT3, which the Dream Project gets its aero kit from. The marque will also be showcasing its brand new Daytona Prototype endurance race car called the ARX-05, and a trio of Pikes Peak contenders based on the NSX and Honda Accord-related TLX.

Also on display was a visually-modified version of the forthcoming Honda Jazz facelift, as well as a Honda Civic Type R 'Red Carbon' - though there's no news on whether the options will be available in the UK. 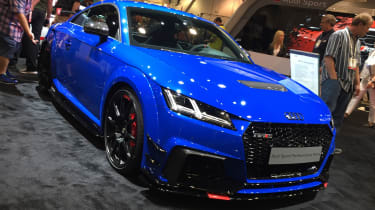 Audi is one of a number of European marques to visit Sin City for the SEMA Show, showcasing two high-performance TTs.

First up is the TT RS with Audi Sport Performance Parts. Officially announced back in July, Audi's Performance Parts subsidiary offers an extension to existing sporty models such as the TT RS. It features two-way adjustable coilover suspension aerodynamic enhancements and 20-inch lightweight wheels. The brakes have also been enhanced and feature ducting, which aids cooling. Inside you'll find an Audi Sport Performance steering wheel with Akrapovic titanium exhausts fitted at the back.

In addition, Audi also revealed a track-bred variant called the Clubsport Turbo Concept. It was first teased two years ago and little has changed in regard to the performance on offer. A 592bhp 2.5-litre twin-turbo five-cylinder engine powers the car, which is capable of 0-62mph in 3.6 seconds and a top speed of 193mph. Inspired by the Audi 80 IMSO GTO race car of the 1980s, the TT Clubsport Turbo Concept is 5.5 inches wider and comes with a manually adjustable rear wing.

The all-new M5 also features at SEMA, with a range of BMW M Performance Parts fitted to the vehicle. Trinkets such as a carbon-fibre rear spoiler and carbon-ceramic brakes are fitted, along with a sports exhaust system to help boost the noise levels of the 592bhp 4.4-litre twin-turbo V8. The M Performance Drive Analyzer is also fitted, which records vital vehicle data and feeds it back to a smartphone app. 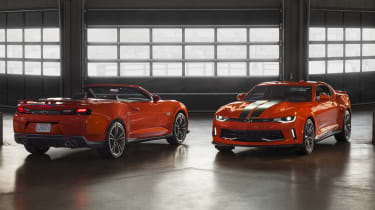 Chevrolet is celebrating 50 years of partnership with Hot Wheels with the release of the Camaro Hot Wheels 50th Anniversary Edition.

For an extra $4,995 (£3,780), customers in the US looking to buy a Camaro 2LT or 2SS coupe or convertible can benefit from a special orange paint scheme with two graphite grey stripes down the middle. The aesthetic makeover also includes 20-inch forged aluminium wheels, Hot Wheels badges dotted around the car and orange brake calipers.

The original Chevy Camaro was one of the first cars produced by toy car maker Hot Wheels back in 1968. The Hot Wheels Camaro is one of around 20 showpieces the Detroit marque will be bringing to this year's SEMA show. 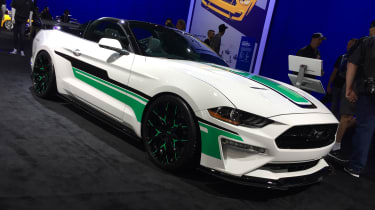 Ford has brought an armada of 50 vehicles to SEMA 2017, with the latest Mustang facelift leading the charge.

Seven modified Mustangs will be showcased in Las Vegas this year. California’s MAD Industries has come up with its equivalent of the Mustang Convertible with a unique paintjob and 20-inch wheels.

Ford tuning specialists Roush has created a wide-body variant of the Mustang, baring resemblance to the Boss 429 of 1970.

Tucci Hot Rods from New York has come up with a 200mph 2018 Mustang Fastback. Two turbochargers are added to the 5.0-litre V8, the ride height has been lowered and the body has been streamlined in order for the Tucci ‘Stang to break the 200mph barrier.

Other tuners that have taken kindly to the 2018 Mustang Fastback include DeBerti Design and Air Design, while non-profit organisation DRAGG has decorated the Mustang in a bold police car livery.

Not only does the Pony car get some special treatment, the Focus also gains some extra spoilers. Four modified Focus models are on display in Vegas, with Blood Type Racing offering a track-day variant of the ST hot hatch. An anti-lag turbo is fitted to the special ST along with an additional front splitter and big rear spoiler.

The Focus RS gets special treatment from VMP Performance and the Universal Technical Institute. Rally Innovations from Anaheim has created a rally-bed Focus RS with power coming from a Mountune-modified 2.3-litre four-cylinder. 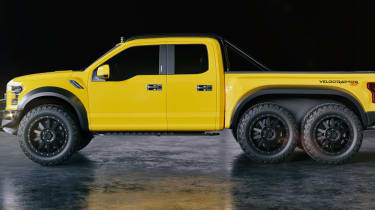 The VelociRaptor's standard 600bhp engine comes with an optional twin-turbo upgrade for an extra $22,500 (circa £17,200) that boosts power to an as yet unknown figure. It also features stainless steel exhausts and a front-mounted intercooler.

Last week, Hennessey Performance teased an image of its upcoming Venom F5 hypercar with a speed limit sign of 300mph next to it, indicating that its new car could break the 300mph barrier. The new car hasn't been revealed yet; as it sits patiently under a sheet in the baking hot Vegas sun.

The original Venom F5 was first announced back in 2014 as a successor to the Lotus Exige-based Venom GT, the unofficial world’s fastest production car. Named after the highest rating on the Fujita tornado measuring scale, the F5 is powered by a 7.0-litre twin-turbocharged Chevrolet V8.

Power is said to top out at around 1,400bhp, while the car weighs just 1,200 kg. The 300mph top speed means that if it entered production, it could beat the Bugatti Veyron SuperSport by 32mph to enter the Guinness Book of Records as the fastest car in the world. 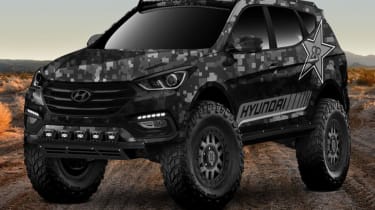 A few weeks ago, Hyundai released images of an extreme Santa Fe SUV in partnership with energy drinks company Rockstar. The car has debuted at SEMA 2017.

Rockstar decals are dotted on the Santa Fe amidst a special digital camouflage paint scheme. The roof rack comes from Rockstar’s Performance Garage division and is fitted with LED lights.

Alongside the Santa Fe, its smaller Tuscon sibling also gets a steroid-infused makeover at SEMA 2017. The Korean marque has teamed up with tuning specialists Vaccar to develop the Vaccar Tuscon Sport.

The most notable feature straight off the bat is the lowered ride height and 20-inch forged wheels. Also sticking out boldly is the large intercooler behind the front grille. Performance will be improved thanks to a Boostec turbocharger with blow-off valve, an AEM air intake system and a VMS Racing oil-catch tank. 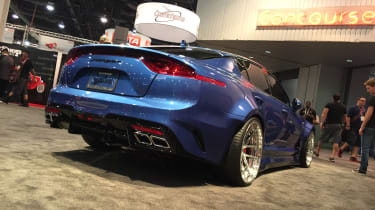 Kia has teamed up with West Coast Customs, formerly of MTV’s 'Pimp My Ride' fame, to produce a boisterous version of the Stinger GT.

It’s the Korean manufacturers first effort at a performance car and the Los Angeles-based custom shop has made some changes to the five-door liftback.

The West Coast Customs Stinger was pitched alongside two other custom Kias at the Las Vegas exhibit – another tweaked by the same tuners and a bright orange example with OEM parts and various sporty trinkets. 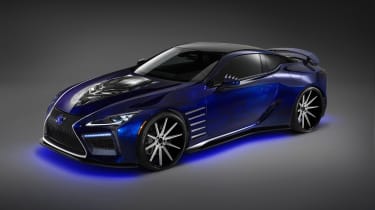 Lexus has brought two examples of its LC coupe to SEMA 2017, with both models baring influences from the upcoming Black Panther movie released in 2018.

The first example is the LC Inspiration Series, which is influenced by the Black Panther comic book character in terms of performance and sophistication. A bespoke white interior is fitted to the Inspiration Series LC 500, which features a unique limited edition collection of barware courtesy of Barneys.

A less subtle ‘Black Panther Inspired’ LC 500 will be pitted alongside the classy Inspiration Series model. Amidst the two-tone black and blue paint scheme, the underbody glows in a vibrant blue light and the bonnet is embroidered with the Black Panther emblem.

Ten-spoke wheels and painted claws on the wing mirrors further compliment this special edition LC that’s not available for purchase, therefore it’s unlikely you’ll ever see one in public. 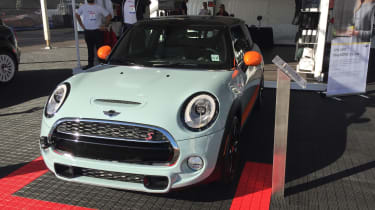 MINI is expanding its John Cooper Works Tuning Kit to the Countryman and Clubman models for the US market.

The tuning kit is available as an upgrade across the Cooper S range for $1,950 (around £1,475), with the 2.0-litre turbo engine boosted from 186bhp to 205bhp. The tuning kit also features a Bluetooth actuated exhaust system (as seen on the MINI Challenge 210) for the driver to easily switch between two exhaust modes. They have the option of selecting Sport mode for standard use and Sport+ mode that increases the exhaust's volume on the track.

An Ice Blue special edition Cooper S Hardtop has been presented alongside a range of JCW-fettled MINIs at this year's SEMA Show. 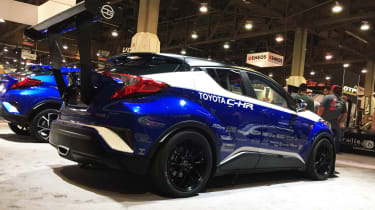 Japanese giant Toyota has revealed what it calls "the world's fastest crossover" – in the shape of the 592bhp C-HR R-Tuned. It's based on the standard C-HR, but uses a tuned 2.4-litre four-cylinder turbo engine, Brembo brakes and DG-Spec Motion Control Suspension (MCS) with motorsports dampers.

Thanks to its increased power output and performance tweaks, it has lapped the 2.5-mile Willow Springs International Raceway in California in the fifth-fastest time ever recorded.

The project follows up the Toyota Sienna R-Tuned MPV that was shown at SEMA in 2015.

Which is your favourite car from SEMA 2017? Let us know in the comments below...