‘Wealthy dealers remind us we should demand hefty discounts in showrooms’

With so many millionaires and billionaires in the industry, we should insist on cheaper car deals, says Mike Rutherford 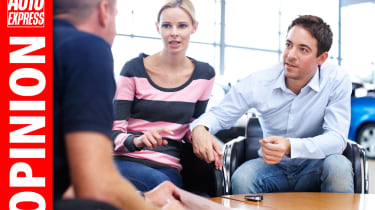 I don’t have a problem when personal fortunes are earned by the best, brightest and hardest-working entrepreneurs and employees in the car business. Bernie Ecclestone, for example, was a poorly educated kid from one of the grottier streets of south London. Yet he went on to make himself the biggest mover and shaker in Formula One, plus a £2.5 billion fortune.

Another working class lad done good is Lord Bob Edmiston, a lovely bloke who spent his £6,000 redundancy cheque from Jensen Motors setting himself up as the official UK importer for marques such as Hyundai, Isuzu, Subaru and Great Wall. At 71, Bob’s recently joined the billionaire club and that’s after the countless millions he’s donated to charities.

The privileged few don’t offend me just because they’re wealthy at the expense of motoring/motorsport consumers. But I look at some of them and wonder how they got so rich. More baffling is how their wealth can increase massively in just a short period.

Mechanic-turned-new-car-dealer Arnold Clark (RIP) recently left his family around £1bn, but their wealth has continued to grow by around £1.5m a week over the past year. London used-car salesman Geoff Warren, of Cargiant, has seen his wealth rise by almost £1m a month since this time last year. He now qualifies as a half-billionaire (£560m). The likes of the Clarks and Mr Cargiant are reminders that retailers can afford to greatly slash their profit margins. So don’t be afraid to demand hefty discounts when buying new or used. Leave a few extra pounds in your pockets, rather than lining theirs.

Lewis Hamilton’s year-on-year increase of £28m (giving him a lifetime pot of £159m) seems extreme when considered that he merely pedals a Formula One racer on Sundays. But this was a year in which he won back the world championship. Excessive, yes. But fathomable, too. Unfathomable is the situation Toto Wolff finds himself in. He works with Lew in the Mercedes F1 camp. And with wife Susie, the occasional pitlane pundit on television, he saw their joint wealth rise by £82m to £322m over the past 12 months.

Neither do I understand how a bloke who currently sells vacuum cleaners, while vowing to become a car designer/manufacturer/retailer, has seen his wealth rocket by £1.7bn in the past year alone. Sir James Dyson is currently good for £9.5bn. Will that pot shrink or grow when he makes the bravest move of his life and enters the motor industry? We’ll see. I think he’d be better off building state-of-the-art road-sweeping vehicles. There you go, James. No need for a billionaire like you to pay for business advice from a pauper like me.

Could we soon be driving Dysons instead of Dacias? Mike Rutherford thinks it’s a possibility…