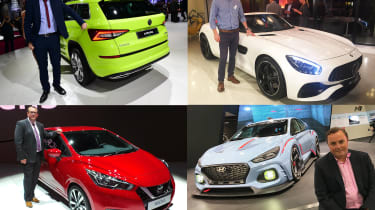 Once again, the Paris Motor Show has wowed the crowds with a host of fantastic new cars. But now that the dust has settled on the new car unveilings of the Paris press days, which new models have caught the eye of the Auto Express team?

There certainly are plenty of newcomers to choose from. We've been treated to revolutionary electric concepts, such as the Volkswagen I.D., Renault Trezor and Mercedes Generation EQ which point the way for a new breed of electric cars aiming to make range anxiety a thing of the past.

Then there are the concepts designed to give a glimpse into new cars we'll be driving in the coming months and years, such as the BMW Concept X2, SsangYong LIV-2 and Hyundai RN30 Concept.

And then there are the new production models that will be hitting showrooms before too long, such as the Skoda Kodiaq, Honda Civic, Land Rover Discovery, Nissan Micra, LaFerrari Aperta and Audi Q5.

There really was a wide variety of models causing a stir, and the Auto Express team has been pounding the show floor to find the best of the best. And here are their highlights... 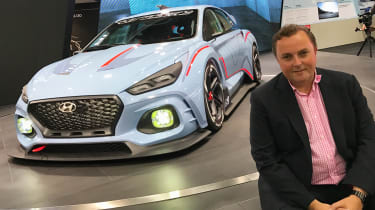 If you’re going to preview a hot hatch, you might as well go a bit wild. And wild is exactly what Hyundai did with its RN30 concept. Okay, so the i30N that will actually make production will be milder, but as a flag in the ground of what Hyundai can do, the RN30 does the job perfectly.

The good news is, if the i30N does well and starts to build Hyundai’s hot hatch credential,s a hotter car – not unlike the RN30 – could well be built. Hyundai’s engineering boss Albert Biermann told me they have a 375bhp, four-wheel-drive prototype testing already. 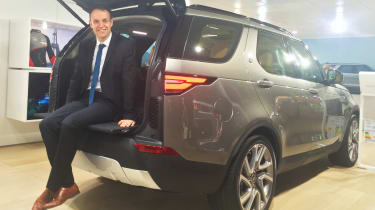 If the purpose of a motor show is to get people talking about your cars, then the Discovery certainly delivered for Land Rover. Is it too posh? Is it too similar to the Range Rover? Is it too expensive? (In First Edition guise at £68,295 yes it is). Everyone had something to say about the Disco, but for my money it is an extremely well executed addition to increasingly impressive range.

And if you think it looks too soft, I suspect its styling will make more sense when we see what Land Rover has in store for its rugged Defender replacement. Best of all, though, was its Powered Inner Tailgate which provided some welcome relief from the hustle and bustle of a major motor show… 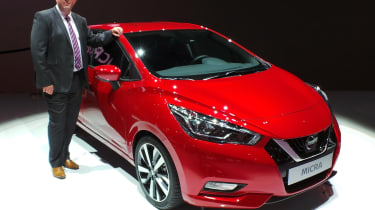 The current Nissan Micra has been a huge disappointment - a car barely worthy of the name. The new generation looks a considerable improvement.

The styling is sharp and edgy - even if there is the faintest whiff of Renault Clio around the rear door line - and the cabin quality drags the Micra up to the standards now expected by supermini buyers.

New versions of the Polo and Fiesta are expected soon, of course - but it's good to see the Micra badge back on an offering that looks, at the very least, a competitive proposition. 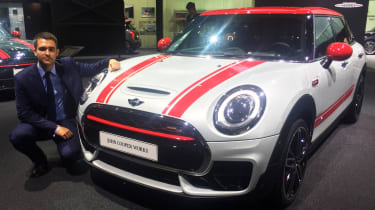 We scooped news of a new Clubman JCW last year, revealing details on the new four-wheel drive powertrain and turbocharged 2.0-litre engine. The production model was revealed at Paris, and while it doesn’t have a Ford Focus RS rivalling 350bhp, the funky estate will still do 0-62mph in 6.3 seconds. Knowing MINI it’ll be suitably agile – so despite being down on power, should be a riot to drive. I can’t wait. 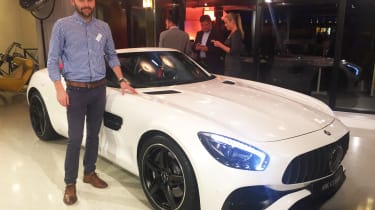 At a show dominated by all-electric vehicles and wacky concept cars, the Mercedes-AMG GT Roadster was the perfect antidote. It’s a drop-top version of one of the best looking cars on sale, so what’s not to like? In fact, the GT is one of those rare cars which looks better as roadster than a coupe. Merc’s designers can be proud of this one. 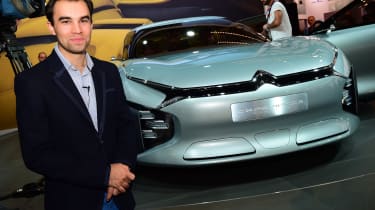 Among all the production ready cars at Paris, the car that stole my heart was the Citroen CXperience. Apparently pronounced ‘CX perience’ it’s designed to hark back to the heydays of eccentric Citroen cars like the CX. Despite this, the CXperience is also very modern – the long and low hatchback is powered by a hybrid powertrain with up to 300bhp and has Citroen’s new advanced comfort suspension. It doesn’t preview and new C5 or C6 though, it’s just a design study says Citroen.

What makes me happy though is that Citroen is doing wacky designs for its production cars too, not just this concept. The new C3 and C4 Cactus are proof Citroen has found its Gallic groove again. 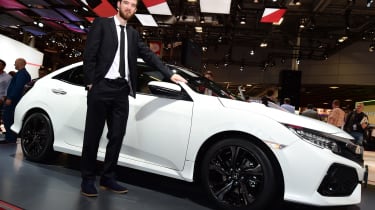 While the Honda Civic’s debut at the Paris Motor Show 2016 has been upstaged somewhat by the arrival of the Type-R version, my pick of the show is the standard car.

The previous model had an awkward look, but this all-new hatchback is a big improvement. The coupe-like roofline, wide grille at the front and twin tailpipes at the rear give it a much sportier look.

That doesn’t mean it won’t be practical, though: it will feature a range of petrol and diesel engines to suit anyone’s needs, and has a 478-litre boot. That’s impressive given the sleek looks, and I can’t wait to find out how it drives. 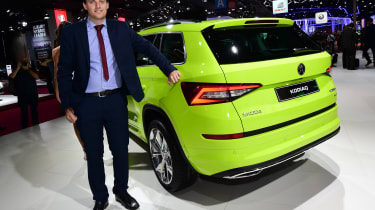 Look past the show car’s bold lime green paint and there’s no doubt the Kodiaq is one of the most important production cars at Paris. The big Skoda looks set to cause serious upset to the large SUV market, undercutting other seven-seat 4X4s such as the Hyundai Santa Fe and Kia Sorento significantly with an estimated starting price of £23,000.

It’s discreet but smart styling, that typical VW-Group cabin solidity and impressive versatility are enough to make it stand out, but our initial impressions showed that it should offer a decent driving experience, too. Add in to the mix a broad range of petrol and diesel engines that will even include a 240bhp performance diesel, and you’ve got a potential class leader. 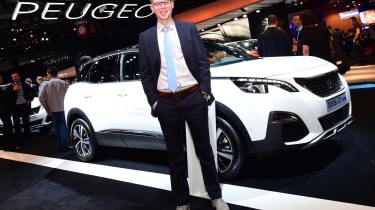 Motor show concepts might attract all the attention, but production-ready cars like the new Peugeot 3008 are what will make buyers part with their cash – and with this new crossover there’s good reason to.

The old car’s dumpy looks are out and in comes a sleek and stylish, more SUV-like body. The interior is a big step on, too, featuring the second-generation of Peugeot’s i-Cockpit with a hi-res widescreen display and plenty of high quality materials.

A big 520-litre boot means it’ll be much more practical, combining its attractive looks with real-world usability. The crossover sector might be more crowded than ever, but with the 3008 the Nissan Qashqai better watch its back. 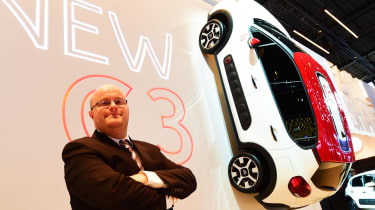 The Citroen C3 successfully distils down the striking C4 Cactus formula into something a little more conventional. It still features the Cactus-style Airbumps, but they’re slimmed down. It’s bold, funky face looks as chic as a MINI, but it’ll be offered at a more affordable price.

Inside the C3 is equally stylish – arguably more so than the DS 3, a model that’s supposed to be more upmarket. The seats are wide and comfortable, and the grey/fabric, brown leather interior of the show cars looks fantastic. There seems to be a decent amount of space in the rear too, and the boot is pleasingly deep.

The C3 is perhaps even more of a landmark car than the Cactus, as it’ll take the reborn Citroen brand to even more buyers. It’s shaping up to be a very appealing proposition. 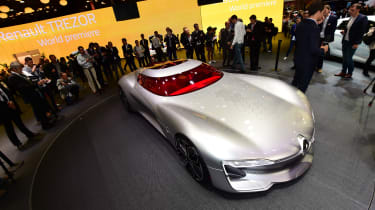 When we first clapped eyes on the Renault Trezor, we wondered why Renault had designed a concept car called Trevor. Quickly realising it hadn't and the name was Trezor, we just thought wow!

The Trezor is a concept car from the old school, a muscle-bound smear of a supercar designed to suck all the Paris Motor Show limelight in the direction of Renault's stand, like a black hole with 22-inch wheels.

It did the job and design boss Laurens van den Ackar revealed that there was more to the Trezor design than its show-stopping potential. Elements of the styling will filter out onto future Renault production cars whereas the advanced electric powertrain and autonomous driving tech point at the course Renault has plotted for itself for the coming years and decades. The spectacular flip-top roof that's the only means of entry into the Trezor, probably won't see a production line but it served as the Renault concept's secret weapon in case any show-goers' gaze started to wander. 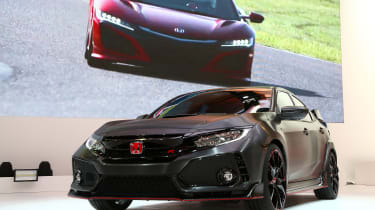 My colleague Sam may have come over all sensible by choosing the standard Civic as his show car, but thist Type R prototye easily stole all the attention on the Honda stand. It was inevitable that the 10th generation Honda Civic would get a new fire-breathing Type R variant, but seeing it officially the first time still made my jaw drop.

The previous-generation FK2 was admittedly divisive among the Auto Express office, but this new one is better proportioned and yet just as mad to look at. The brushed aluminium wrap of the show car along with those angular headlights, whopping spoiler, huge wheels and red detailing are enough to make anyone with an inner boy racer in them hot under the collar.

Honda says it definitely won’t be all show and no go, either, as it is planning on reclaiming its front-wheel drive record at the Nurburgring with it. Official figures aren’t yet confirmed but we understand that it could have around 340bhp and a 0-62mph time of five seconds - that’s enough to make it the world’s most powerful front-wheel drive hot hatch. 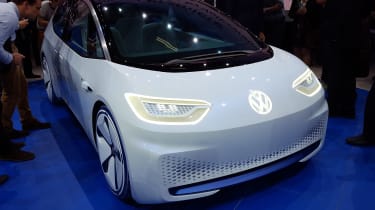 It will be a while yet before the public forgives Volkswagen for the dieselgate scandal – but the I.D. concept could be a step in the right direction. Clearly the production model will be toned down from this mad concept car, but the key ingredients are all there – a low emission electric powertrain, a long range of up to 373 miles, and a striking, distinctive design.

Like all the best concepts there’s an element of theatre to I.D., with a retracting steering wheel and slick digital headlights. But it’s the boring bits underneath that are of more importance – an all-new electric drive platform which could underpin a whole new generation of electric VWs. Who knows, in a decade or two, cars like this could be outselling the Golf…

Which car was your pick of the Paris Motor Show stars? Let us know in the comments section...