We celebrate those occasions when a great concept car becomes a great road car, pushing the boundaries of design and technology in the process… 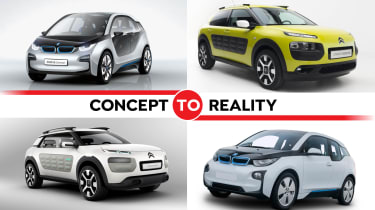 If you want to know what our cars will look like and what technology they’ll use in the future, checking out the latest concept cars is a good place to start.

Concept cars provide a glimpse into what car makers believe the future of car design and technology will hold. Sometimes these predictions look to the distant future and have little direct relationship to models that will actually be built, but sometimes they’re grounded much more solidly in production reality. Concepts that actually preview the form of an imminent production model are usually far more interesting, especially when a great concept car leads directly to a great road car in fairly short order.

Our ‘Concept to reality’ series looks at the relationship between some of the best production-focused concept cars that went on to become great production models. Transferring the design of a concept car onto a road car without its essence being lost amidst all the safety regulations, practical necessities and cost counting is a huge challenge, but designers and engineers behind the models we look at here have risen to it.

Our Concept to reality candidates might not be the best cars ever made, but their manufacturers realised the original design concepts in production form with a skill that deserves respect. From sports cars to SUVs, these are the production cars that have remained truest to their concept car forerunners and been all the better for it.

Use the menu below to see all the cars in the Concept to reality series...