The Jeep Wrangler Sahara is an extremely capable off-roader, but is it more than just a one trick pony? 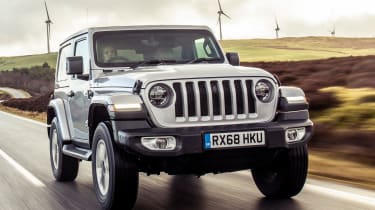 The new Jeep Wrangler may be better than its predecessor in every conceivable way, but it’s still a car you buy with your heart rather than your head. In two-door petrol form it’s thirsty, hideously impractical, and tricky to drive around town. Yet that’s unlikely to matter to those who want one; the Wrangler is an incredibly talented off-roader that’s simply dripping in charm.

Jeeps are made for off-roading. The brand’s rough and ready image is unrivalled in the auto industry. We spent over a week and 1,000 miles testing the latest Jeep Wrangler in two-door Sahara trim. It’s the cheapest of three specifications and comes with a choice of two engines: one petrol and one diesel.

Not that you’ll want to floor it quite so fast, as the utterly lifeless and alarmingly slow steering makes it a challenge to drive at low speeds. Things improve as you pick up the pace, but there’s no hiding the Jeep’s rudimentary ladder chassis.

It shakes and shimmies over speed bumps, while the removable rear roof creaks as you traverse even small imperfections. The eight-speed auto gearbox shifts smoothly but feels more like a CVT than a conventional torque converter at times – with the revs tending to rise sharply under hard acceleration.

The two-door Wrangler is further flawed when it comes to ergonomics. The driving position is awkward, with nowhere to rest your left foot on longer journeys. You’ll need to be a contortionist to clamber into the back, while the bulky-side hinged bootlid hides a tiny 203-litre boot. That’s big enough for a few shopping bags – but too small for suitcases or a dog.

Yet none of this matters when you use the Wrangler as it’s intended. This is an off-road car that can be used on the road, rather than a road car that can be taken slightly off the beaten track. Every version gets a low range gearbox that can effectively ascend loose rocks and slippery climbs, ford deep water and wade through thigh-high mud – all without breaking a sweat. The Wrangler has about as much in common with the current crop of urban crossovers as Ford Fiesta does to a Ferrari. 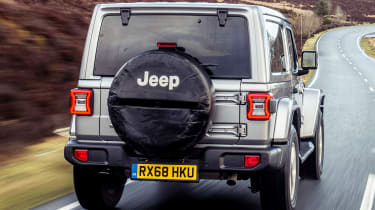 You’ll sit in relative luxury while you’re at it, as well. Our car featured the JL (the current Wrangler’s internal model designation) Launch Pack, which for £1,300 adds sand-coloured leather, heated front seats, keyless entry and blind spot monitoring. The materials on the Wrangler’s dash, doors and centre console feel pleasingly durable, despite their soft touch.

You’ll pay about as much for a well-laden Land Rover Discovery Sport, but every Wrangler features an 8.4-inch touchscreen with sat-nav, DAB, Apple CarPlay and Android Auto, as well as a nine-speaker Alpine stereo. Dual-zone climate control, cruise control, LED lights and 18-inch alloy wheels are also included.