Land Rover used to be a rough and rugged brand, but cars like the Land Rover Discovery Sport that are for sale today are a far cry from their rugged ancestors. In fact, think of the Discovery Sport as a more practical alternative to the luxury Range Rover Evoque and you won't be disappointed.

Though classed as a facelift, the changes under the skin were exhaustive: the platform was strengthened and it was adapted to accommodate electrified drivetrains – both mild hybrid and, eventually, plug-in variants.

The exterior styling inside and out remained familiar, but subtle nips and tucks worked to create a more modern appearance overall. Inside, this took the form of a much improved suite of tech: the infotainment system was improved, the climate functions became slicker and some models ganed the option of a digital instrument cluster. 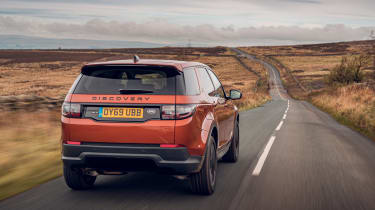 The seven-seat layout remained, giving Land Rover something unique in the Premium SUV class. It's priced at a level that puts it up against the likes of the Audi Q5, BMW X3 and Mercedes GLC, while the Jaguar F-Pace, Volvo XC60 and Alfa Romeo Stelvio are also opponents, although none of these cars offer seven seats. If that's a requirement, then you should have a look at the Skoda Kodiaq, VW Tiguan Allspace and SEAT Tarraco, while the Honda CR-V and Nissan X-Trail also offer seven-seats as an option. These cars are also cheaper to buy, too.

One area where the Land Rover Discovery Sport exceeds its rivals is its off-road ability. Cars with four-wheel drive feature Terrain Response, which adjusts the gears and traction control to suit different off-road conditions.

Prices for the Land Rover Discovery Sport start from around £32,000 for the entry-level model. That’s for a model with front-wheel drive and a manual gearbox; adding two more driven wheels and an automatic gearbox sees prices climb to around £37,000. Above the base model there is the Sporty R Dynamic model. Each is available with three additional Specification Packs: S, SE and HSE, with each adding extra standard kit. The priciest Discovery Sport – the P300e plug-in hybrid version in R Dynamic HSE specification – comes to roughly £51,000.