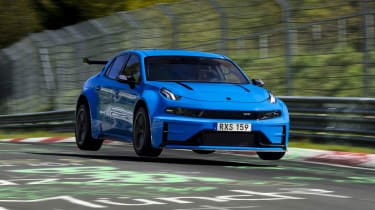 The Chinese-owned Lynk & Co 03 Cyan Concept has set a Nurburgring Nordschleife lap time of 7:20.143 minutes, breaking two lap records in the process. That lap time makes the 03 Cyan both the fastest four-door car and the fastest front-wheel-drive car to lap the circuit, respectively outstripping the Jaguar XE SV Project 8 and the Renault Megane R.S. Trophy-R.

At the helm was 2017 World Touring Car Champion Thed Bjork, who averaged 105mph during his record-breaking lap. The lap marks the first time a Chinese manufacturer has claimed a record at the Nurburgring with a production vehicle.

The Lynk & Co 03 Cyan Concept is a collaborative project between Geely and Cyan Racing; the company formerly known as Polestar. It’s based on the standard Lynk & Co 03 saloon, but features a range of engine, chassis and aerodynamic upgrades, inspired by the brand’s 03 TCR touring car racer. Each example will be assembled at the firm’s headquarters in Gothenburg, Sweden.

It’s powered by a turbocharged 2.0-litre four-cylinder petrol engine, which produces 521bhp and 504Nm of torque. Drive is fed to the front wheels via a six-speed sequential gearbox and a limited-slip differential and, thanks to its relatively low 1,287kg kerb weight, the 03 Cyan Concept has a 0–62mph time of 4.4 seconds and a top speed of 192mph. 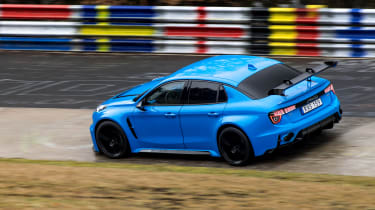 Chassis revisions over the standard Lynk & Co 03 include a unique set of 20-inch alloy wheels, a wider track, tailored Ohlins dampers, a performance exhaust and large ventilated disc brakes with six-piston calipers. The 03 Cyan Concept also features an aerodynamically-functional carbon fibre body kit and an enormous rear wing, which together help to generate up to 1.5G when cornering. The car is finished in Cyan Racing Blue; the company’s signature colour.

Development for the Lynk & Co 03 Cyan Concept was handled by the same group of engineers responsible for the 405bhp Volvo C30 Polestar and 500bhp Volvo S60 Polestar concepts. It was designed as a development platform for future Lynk & Co performance products, with testing due to continue throughout the winter.

The Lynk & Co 03 Cyan Concept is available to order now, but as with the C30 and S60 Polestar, Cyan Racing will only offer the vehicle to a “select number of VIP customers.” Cyan Racing says it will not restrict the car’s sale by country, which means UK sales remain a possibility. First deliveries are expected towards the end of 2019.

Geely has announced a performance saloon concept based on the Lynk & Co 03. The 03 Cyan Concept has been built in collaboration with Cyan Racing, the company formerly known as Polestar, which was famous for tuning cars from Volvo, Lynk & Co’s sister brand. The performance model is inspired by the firm’s 03 TCR touring car racer, and it previews how future fast cars from Lynk & Co could look. 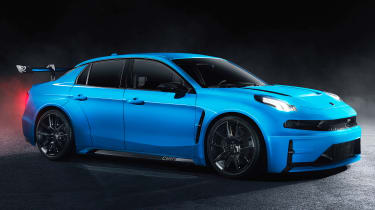 Developed by the same engineers responsible for the Volvo C30 Polestar, the Lynk & Co 03 Cyan Concept is powered by a 2.0-litre four-cylinder turbocharged petrol engine, which produces a staggering 521bhp and 504Nm of torque. A six-speed sequential gearbox is fitted, but all that power only goes to the front wheels. However, a limited-slip differential has been fitted to boost traction.

Thanks to a relatively low kerbweight of 1,287kg, Lynk & Co claims that the Cyan Concept has a 0-62mph time of 4.4 seconds, a 0-124mph time of 10 seconds and a top speed of 192mph. More impressively, the firm claims that the car can generate maximum cornering forces of up to 1.5G.

Revisions over the standard Lynk & Co 03 include a unique set of 20-inch alloy wheels, a wider track, an aerodynamically-functional bodykit with plenty of carbon fibre thrown in, a huge rear wing, bespoke dampers from Swedish suspension expert Ohlins, a performance exhaust and large ventilated disc brakes with six-piston calipers up front. And of course, the car is finished in Cyan Racing Blue, the company’s signature colour.

The 03 Cyan Concept is currently undergoing testing in Spain. It will join the Cyan Racing team’s 03 TCR racer for further track-based development ahead of the 2019 FIA World Touring Car Championship, which starts this April.