Peugeot’s 5008 has been transformed from a boxy MPV to a sleek SUV, but can it follow the 3008’s success as it hits Britain? 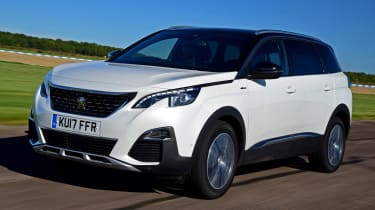 Replacing the ageing Peugeot 5008 people carrier with a more contemporary SUV has lost it little in the way of versatility and practicality. The new car has many of the smaller 3008’s desirable features – such as the functional, stylish and well equipped interior – while adding an extra row of seats. Unfortunately, the 5008 isn’t as composed or good to drive as a Skoda Kodiaq, because it feels soft and unwieldy. Those regularly carrying seven might want to look at the bigger engine options, too.

Peugeot’s great MPV killing spree continues with the new 5008. What was once a boxy multi-purpose vehicle has been replaced by a high-riding SUV – but has the brand forgotten traditional buyers’ needs by bowing to the whims of crossover-loving fashionistas?

Before we answer that, let’s take a look at the new 5008 from a design point of view. It not only ploughs a different furrow from its bland predecessor, but also to other seven-seat SUVs on the market. The chiselled front, contrasting roof, boutique-like interior and diamond-cut alloys give it a strong look next to cars like the Skoda Kodiaq and Nissan X-Trail.

Nose on, it steals the smaller 3008’s face and clamshell bonnet, but from the A-pillars back, it’s quite different. Where the 3008’s roofline tapers gently to a neatly resolved rear end, the 5008’s is straighter. 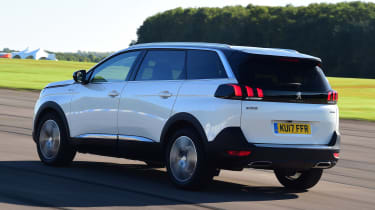 The back is more upright to accommodate two extra seats, but to our eyes it looks a little awkward. The feeling of 3008 déjà vu continues inside. Up front you’d swear you were sitting in the smaller model, with its concept car-like cabin design. There’s a real sense of quality, too – the old 5008’s dash creaked and squeaked, but the new car comes moulded from soft-touch plastics.

There’s fabric on the doors and piano-like short keys for the infotainment. The i-Cockpit digital dials (not unlike Audi’s virtual display) are standard on all models and a real highlight, while massage seats are available. It all adds personality to a practical car that’ll be used mainly for school runs and tip trips.

In the back, the conventional split-folding bench from the 3008 makes way for three individual seats. They all have Isofix child seat mountings, and they slide and recline for maximum comfort. The seatbases are hard, but thanks to the 5008’s longer wheelbase (165mm, to be exact) and flat floor, there’s a huge amount of kneeroom. 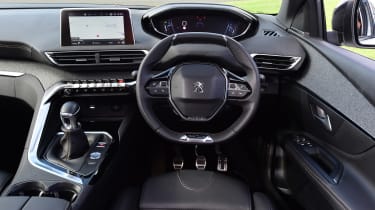 Headroom is good, too, although the panoramic roof (standard on GT Line) robs middle seat passengers of some space. Children will love the blinds, and the large cubby in the floor is neat. The flimsy picnic tables are a little disappointing, however.

Climbing into the third row is easier than in the seven-seat Skoda, because the middle row pushes further forwards. The rearmost seats are primarily designed for kids, but adults can sit there as long as the row in front is slid forward. The two rear chairs fold into the floor when not in use, and are covered by lift-up panels. The seats can also be removed for extra under-floor storage.

With everything folded there’s a 2,150-litre boot, which is more than you get in a Kodiaq, X-Trail or Kia Sorento. But the floor isn’t neat; between the folded seatbacks and boot floor, little flaps do their best to cover the gaps, but don’t really do a good enough job. If you’ve got a young family, you’ll be forever losing toys and other odds and ends. 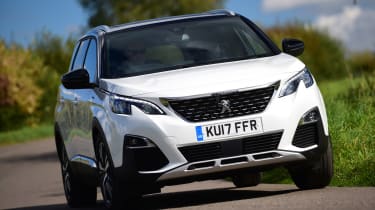 Thanks to its slightly longer body and added weight, the 5008 rides over bumps better than the 3008, but potholes can still send sharp shockwaves into the cabin. While the small steering wheel works well on the 308 and 3008, on a larger car such as this, it feels a little disconcerting. There’s very little feedback, making the SUV feel unwieldy. You’ll notice plenty of body roll, too.

The engine range comprises two petrols and a selection of diesels. We tried the entry-level 1.2 PureTech turbo, which pulls well most of the time, but with all seven seats in use or a bootful of luggage, the 1.6 petrol or 2.0-litre diesel would be better choices. The six-speed manual isn’t the sweetest gearbox, either, although the more expensive engines are available with a new eight-speed auto.

There’s no four-wheel-drive option, but the 5008 offers an optional Grip Control system (first seen on the 2008) that alters the traction control to provide grip in slippery conditions. It works well, but prevents the Peugeot going as far off road as some rivals.