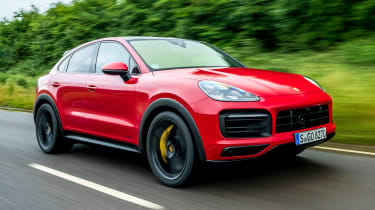 A huge SUV may seem an odd thing to recommend these days, but if you’re in the market for a non-electrified Cayenne, this is the one we’d go for. It has that great duality that you find in the best performance SUVs, being able to perform as a comfortable cruiser and, with the flick of a switch, an entertainer. Just watch yourself on the options list.

To those who know their Porsches, GTS models tend to be a bit special. They aren’t usually as flat-out fast as Turbo editions, but they occupy a useful space below them, delivering extra performance and handling involvement that appeal to keen drivers more than pure speed freaks.

With this in mind, the GTS editions of the German brand’s SUVs have arguably the biggest challenge: to deliver extra agility under a body that’s still much taller and heavier than a regular sports car’s. And that’s what makes cars like this latest Cayenne GTS an interesting proposition.

A new-generation GTS has been missing from the latest Cayenne range until now, and it marks quite a departure for the variant. Out goes the previous edition’s twin-turbocharged V6 engine and in comes a 4.0-litre twin-turbocharged V8 – closer to the powertrain that featured in the GTS before 2015. Power jumps by 20bhp, to 454bhp, and the motor’s maximum torque is 20Nm greater, at 620Nm.

That brings some pretty stonking performance figures, none of which could be described as slow. We’re trying the Coupé version of the GTS here, and if you spec it with the optional Sport Chrono pack, as most people do, you’ll have a jumbo five-seat SUV that can cover 0-62mph in just 4.5 seconds, before going on to a top speed of 168mph.

Underneath, the GTS gets a 20mm lower ride height and retuned Porsche Active Suspension Management (PASM) adaptive dampers. There’s also Torque Vectoring, which applies the brakes on individual wheels when cornering to improve the turn-in response.

You’re unlikely to feel this from the off, but the GTS will impress in other ways. The V8 is smooth and hilariously untroubled by life, so it’s barely registering 1,500rpm as you drive along a motorway at 70mph. This is a refined car when it wants to be, with only the understandable tyre roar from our car’s 22-inch wheels (21s are standard) interrupting the serenity. It’s comfortable, too. You’ll be in no doubt that you’re in a car ultimately set up for body control, but there’s a softer edge to the ride that goes a long way to soothing the worst road imperfections. Factor in nicely weighted steering and a smooth-shifting, intelligent eight-speed automatic gearbox and you have a fine long-distance cruiser. 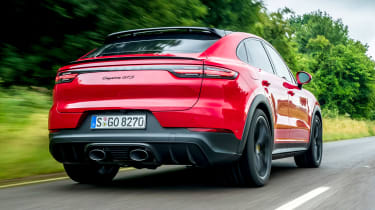 Then you find a fast, flowing back road, stick the GTS into Sport Plus mode, and it becomes an entirely different beast. The body control tightens up, the gearshift and responses improve, and it’s alarmingly happy to cope with being thrown from side to side.

The way this 2.2-tonne SUV changes direction is little short of freakish – more impressive, if anything, than the manner in which it gains velocity. And all the while, the V8 soundtrack has a fabulous bassy tone – not AMG crisp, perhaps, but not far off it – with lots of crackles and pops on the overrun.

Is it as much fun to drive as a 911? Of course not. But it’s hard to think of many other SUVs of this size that would offer even this level of involvement and enjoyment.

Of course, while the driving experience may shrink around you, the metal doesn’t. You might find yourself meeting oncoming traffic and realising that you’re filling more than half of the road. The Cayenne is a very big car on the roads where it comes alive.

Inside, Porsche has only dabbled with what was already a beautifully finished, logically laid-out cabin. You get bespoke sports seats and Alcantara trim on the headliner, doors and armrests, but that’s really about the height of it, unless you count a smattering of GTS logos and some new colour accents.

You can go crazy on the options list to make your Cayenne GTS more individual, but we’d urge restraint unless you really do have a bottomless pit of money to draw upon. Our test car’s two main box-ticks – the lightweight pack (including a carbon fibre roof) and the excellent carbon-ceramic brakes – accounted for more than £12,000 alone, and the price as tested was north of £123,000. Be careful out there, people.