Does adding electric power to the Porsche Panamera Turbo S make it even better? We find out… 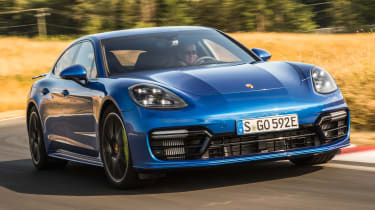 It’s pricey, but the Porsche Panamera Turbo S E-Hybrid is hugely fast, comfortable and great to drive. We’re not convinced it’s significantly better than the normal petrol-powered Turbo, either, while those after rock-bottom running costs should seriously consider the cheaper 4 E-Hybrid before taking the plunge.

We’re used to thinking about plug-in hybrid cars as fuel-saving commuters, but the new Porsche Panamera Turbo S E-Hybrid is actually the most powerful saloon car the brand has ever built. The range already features electric power in the form of the Panamera 4 E-Hybrid, but that uses V6 power - this new version is built around the powerful V8 from the Turbo model.

The electric motor is the same as the one in the 4 E-Hybrid, and adds an extra 134bhp to the Turbo’s already potent 542bhp. That means at 6,000rpm the total power output is 671bhp. Even with an extra 130kg of batteries on board the Turbo S E-Hybrid is two-tenths faster than the standard Turbo from 0-62mph, taking just 3.4 seconds.

While it feels predictably rapid from launch, it’s actually in-gear where the plug-in version really impresses. It has 850Nm of torque available from 1,400rpm to 5,500rpm, which is most of the rev range - so this Panamera feels more muscular than any other version. The torque band is so wide that the huge performance is accessible no matter which gear you’re in. 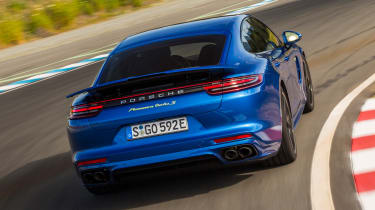 The four-wheel drive powertrain means there’s a huge amount of grip as well. That means it’s not an intimidating car to drive quickly, either. The eight-speed PDK dual-clutch automatic gearbox is responsive, changing gear ferociously in Sport or Sport Plus mode, while remaining smooth in normal driving using the Hybrid setting.

There’s also an electric-only mode, which gives an EV range of around 31 miles. As the Panamera is such a big car (it weighs 2,310kg) performance in this mode is rather underwhelming. Where smaller electric and plug-in cars feel sprightly at low speed, the big Porsche can feel lethargic if you try to speed up without the petrol engine.

Of course that’s easily sorted by switching to one of the other driving modes, but the electric-only Tesla Model S P100D feels as ludicrous as its self-titled driving mode suggests without an engine at all. It’s hard to beat the roar of a V8 while you’re accelerating, though, even if the Porsche’s isn’t one of the best-sounding out there.

Luckily, the Panamera S E-Hybrid remains as good to drive as the other models in the range. While its Tesla rival is incredibly fast in a straight line, the Porsche leaves it for dust in the corners. It feels so much more agile than it should given its weight, thanks to precise, well-weighted steering and good body control.

All models come with adaptive air suspension, which can be stiffened in two stages. The harsher setting is best suited to track use rather than the road, but soften it off and the car rides smoothly, even on some of the badly-surfaced roads along our test route.

It’s at its best on a long trip, and is just as well behaved on the motorway as the petrol-only Turbo. Unfortunately, the standard-fit ceramic composite brakes, while great on track, are a bit too grabby on the road and make it harder to drive smoothly at low speeds. The standard brakes on lesser Panameras offer more feel. 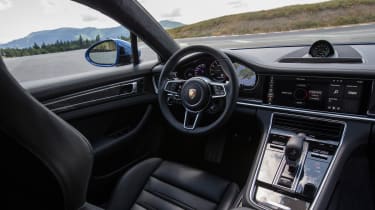 The low driving position, comfortable & supportive seats and well-weighted controls mean the Porsche is very comfortable wherever you are, and the high-quality interior feels very upmarket. A few hard plastics around the bottom of the doors are a shame to see in car costing as much as this, however.

But whichever way you look at it, the Turbo S E-Hybrid is expensive – making it hard to justify the extra £22,040 it costs over the already excellent Turbo version. If you’re after an electric Panamera for driving around town, the 4 E-Hybrid version is still great to drive and has the same all-electric range. It also offers similarly low emissions for rock-bottom company car tax.