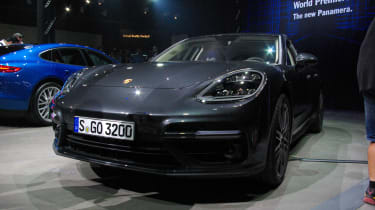 The Porsche Panamera has been around since 2009, with the four-door coupe benefiting from a facelift just over three years ago. Now it’s time for an all-new model though, with the second-generation Panamera being officially revealed at a special event in Berlin, Germany.

The new model gets the familiar long bonnet, pronounced shoulderline and large alloy wheels, with subtle tweaks to the bodywork. It’s 35mm longer, 5mm wider and 5mm taller than before, with a 30mm longer wheelbase.

New air intakes and a redesigned grille give the front end a more aggressive look, while at the rear there are new LED lights that stretch right across the back. 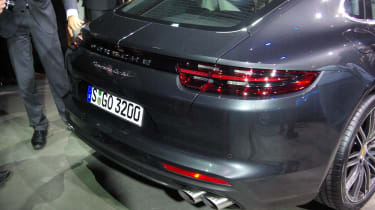 It’s here where Porsche has most obviously linked its new Panamera to the rest of the current Porsche range, with many similar design elements found on the updated 911 and new 718 Boxster and Cayman ranges. Big exhaust pipes and a rear wing that deploys automatically complete the look.

Inside, there’s a new dashboard layout, with touch-sensitive surfaces replacing the previous car’s array of buttons. A centrally mounted tachometer also harks back to the legendary 1955 Porsche 356 A.

The new car includes two seven-inch displays in place of the dials, as well as a 12.3-inch touchscreen featuring online sat-nav, Apple CarPlay integration and an updated voice control system. Under the bonnet is a new engine range, with only the Panamera 4S, 4S Diesel and flagship Turbo available from launch. The new V6 and V8 engines are cleverly packaged to make them more compact, mounted lower in the car to improve the centre of gravity. 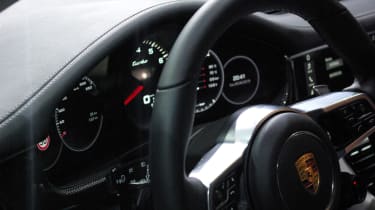 The most powerful 4.0-litre V8 Turbo model gets 542bhp and 770Nm of torque, meaning 0-62mph in 3.8 seconds (or 3.6 seconds with the optional Sport Chrono pack) and a top speed of 190mph. Economy of 30mpg and emissions of 214g/km are improved over the previous model thanks to cylinder deactivation tech. 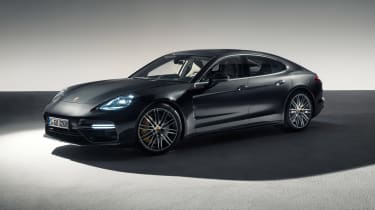 Elsewhere, the car is available with a ‘Sport Response’ button to boost engine responses. Taken from the 918 Spyder hypercar, this offers Normal, Sport, Sport Plus or Individual drive modes.

What do you think of the updated Porsche Panamera? Let us know below... 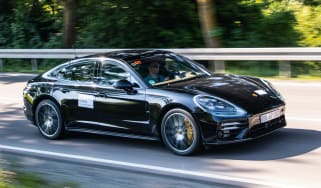 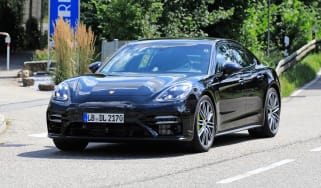 An updated version of the Porsche Panamera has been snapped during its road assessment, sporting a mild design update