The all-new Porsche Panamera is bigger and better, but how does the flagship 542bhp Turbo model perform on British roads? 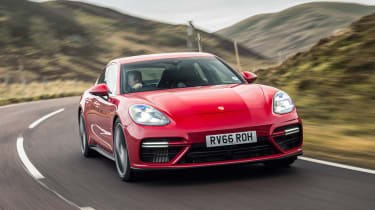 The Porsche Panamera has undergone a dramatic transformation and you can feel it in everything it does – cementing its place as one of the most capable sports saloons on the market. Not only have improvements been made to performance and handling, but also big upgrades in design, technology and refinement. The sensible money goes on the Panamera diesel 4S, but there’s no ignoring how impressive the Turbo model is.

The new, second-generation Panamera shares only one thing with its predecessor: its name. Other than that, Porsche’s new four-door saloon is almost unrecognisable, with a brand new chassis, new turbocharged engines and a completely redesigned cabin crammed with the latest technology.

This flagship 542bhp Turbo model proved itself on the German autobahn a few months back, but this is our first chance to drive it on the UK’s tighter and more technical roads.

It’s no secret that the old Panamera wasn’t a looker. Far from it, in fact, but that’s not something that can be said about the new model. Everything about it now screams four-door 911 – thanks to its stunning proportions and flared rear haunches. 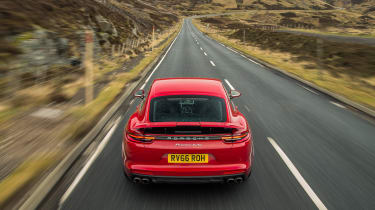 If you thought the exterior was an improvement, the Panamera’s new cabin moves the game on even further. The button-infested centre console has been replaced by a suite of touch sensitive buttons, while the second-rate infotainment system has made way for an HD display that wouldn’t look out of place on your home TV stand.

A huge analogue rev counter is flanked by two additional digital readouts, which can be configured to show everything from navigation to trip computer – and even night vision display. Despite its space-age looks, everything is immediately intuitive and simple to use. The cabin design and execution is simply faultless.

Up front sits a new 4.0-litre twin-turbo V8 engine, which barks into life on start-up, but settles to a muted burble – deceptively masking the 542bhp and 770Nm of torque. Power is transmitted via a new eight-speed PDK dual-clutch gearbox and four-wheel drive. 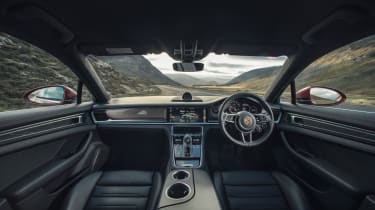 With a driver on-board, the new saloon breaks the 2,000kg barrier – yet nothing that is this heavy, practical or comfortable moves as quickly as a Panamera Turbo. Engage launch control and it’ll sprint from 0-62mph in 3.6 seconds. If you’ve got enough space, you’ll hit 190mph.

A wide and healthy spread of torque – 770Nm from under 2,000rpm – means there’s relentless and thundering progress to be made in any gear at any speed. As you pile on the revs, the 4.0-litre V8 really begins to make itself known – with the sports exhaust only adding to the theatre.

But what’s more impressive than the speed, is the way the Panamera Turbo handles. A trick new addition to the second-generation model is rear-axle steering technology (a worthy £1,478 option), which helps boost agility when cornering slowly and stability when cornering quickly. What it does, quite simply, is turn an Olympic weightlifter into a rhythmic gymnast. It’s brilliant.

The steering overall is largely lacking in feedback, but the rear-axle steering system also brings with it a quicker steering rack – amplifying the feeling that the Panamera handles like a much smaller car. That’s only true to a certain extent, as on the road the Panamera feels wide; a deep breath and a firm grip of the steering wheel are common impulse actions when you see something hurtling the other way on a tight B-road. 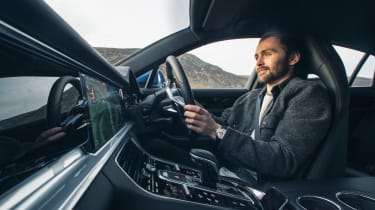 But not only is the Panamera capable, it’s also comfortable. Air suspension and adaptive dampers come as standard and the setup does a fine job of keeping the two-tonne limo floating along the road. The Panamera doesn’t quite isolate those inside from the imperfections quite in the way a Mercedes-AMG S 63 does, but it’s not far off.

The Panamera is even pretty good at the boring stuff. In the back there’s ample space for two adults and masses of legroom (if you need even more space a long-wheel base version is on the way) while a 495-litre boot can swallow more than enough luggage, too.