Handling is deft, the turbo petrol is strong and the steering is nicely weighted, but the ride is unsettled and refinement is so-so 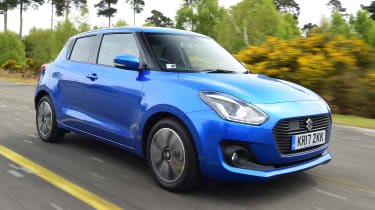 The Swift features some very trick construction that means it’s just about the lightest car in the supermini class; choose the right version, in fact, and you’ll get a car weighing less than 900kg, which is a minor miracle in this day and age.

That means that the 1.0 Boosterjet Turbo engine feels pretty comfortable with life; it’s not about to tear up asphalt, but you don’t have to expose yourself to too much of its characterful three-cylinder thrum, because it does its best work by 4,000rpm anyway. Indeed, you can treat it almost like a diesel, because there’s usable torque from below 2,000rpm, and in our performance tests it exceeded its quoted 0-62mph time of 10.6 seconds by almost two seconds. 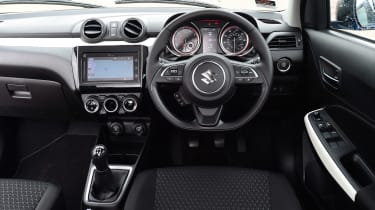 Likewise, the 89bhp offered by the naturally aspirated 1.2 sounds small by modern standards, but the Swift's light weight means that it feels anything but sluggish. The lack of a turbo means that it’s down on torque though, so be prepared to work the slick and smooth five-speed manual gearbox to get the best out of the engine.

The rest of the basics feel sound enough. The steering doesn’t do an amazing job of communicating what the front wheels are doing but it’s nicely weighted and consistent, making it relatively easy to place the Swift in corners. The five-speed manual gearbox has a pleasingly short throw and is happy enough to shift quickly, too.

That lack of mass means the Swift feels pretty agile, too – not as crisp as the Ford Fiesta, certainly, but a match for just about anything else. The car is happy to change direction quickly and it stays admirably flat in corners. Unique to the class is the AllGrip all-wheel drive system available on some models, which offers extra traction and security. While its cheap and rugged enough to do a decent job off-road, it’s certainly has only a limited appeal with buyers.

The trade-off for this agility is ride quality; Suzuki’s engineers reportedly spent time developing the Swift on UK roads, but it hasn’t quite paid off. In the most part it stays composed, but over broken surfaces – precisely the sort of bumps and potholes that are common on British B-roads, in fact – it gets a bit unsettled. In particular, passengers in the rear are likely to complain about being bounced around - a result of the car’s relatively simple torsion-beam rear suspension set-up and low weight.

There’s nothing to suggest that you’re driving a hybrid if you’re being the wheel of an SHVS-equipped car, incidentally. It’s a very mild set-up, with a lithium-ion battery under the front passenger seat that harnesses braking energy and then uses it to power a small integrated starter generator. This, in turn, helps the petrol engine when you’re accelerating, but the goal is efficiency rather than performance, so it never feels like an extra surge of pace. Indeed, if anything, it’s impressively well integrated.

The hot Swift Sport has a decent breadth of talents, with a punchy engine and direct steering, but it's undone by handling that plays it too safe; as a result, other hot hatches are more exciting to drive.

The most basic engine in the Swift is the 1.2 Dualjet petrol, a normally aspirated four-cylinder unit producing 89bhp and 120Nm of torque. In this spec it’s available with the entry-level SZ3 trim only (and the occasional special edition), and it’s not the most rapid of vehicles; 0-62mph takes 11.9 seconds.

The heartland of the range is the strong and swift 1.0 Boosterjet Turbo three-cylinder. In conventional form, this turbocharged motor produces 110bhp and 170Nm of torque between 2,000rpm and 3,500rpm - enough for the Swift to crack 0-62mph in 10.6 seconds.

Suzuki’s SHVS mild-hybrid set-up is offered on both of these motors, which helps reduce emissions, but without an increase in performance. 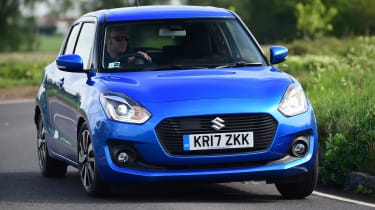 The SHVS-equipped 1.2 is the niche model in the range, because it also gets four-wheel drive. That hybrid tech helps to negate much of the efficiency penalty of the 4x4 system, but it's the slowest Swift, with a 0-62mph time of 12.6 seconds.

All of these derivatives get a five-speed manual gearbox - but there is also a six-speed automatic available. It’s offered only with the non-hybrid Boosterjet, and is actually the fastest Swift model (0-62mph in 10.0 seconds).

The Swift Sport offers 138bhp from its 1.4-litre turbocharged engine. This doesn't sound like much but, given the Swift's low weight, and the engine's decent 230Nm of torque, it's satisfyingly brisk when shooting out of corners.