The Insignia is good to drive, with compliant ride and tidy handling

Vauxhall has worked hard on the Insignia Grand Sport to improve its ride and handling over the old model, and it really has paid off. It’s smooth at low speed, and while you’ll notice bigger bumps when moving a bit faster, the compliant suspension set-up keeps things impressively composed overall.

Fit the optional FlexRide adaptive dampers (about £850), and the Insignia's ability is broadened even further. In Tour mode the chassis set-up is soft and compliant, absorbing corrugations over bad surfaces with a smooth edge, even on cars with wheels of 18 inches and more. Switch to Sport and you don’t lose too much of this welcome suppleness from the set-up, because the suspension’s fluidity remains. You get a little more body control for faster driving on country roads, but the Grand Sport is at its best in the most comfort-orientated setting.

Even on the motorway, road and wind noise isn’t intrusive, and the 1.5-litre petrol in particular remains very quiet. It’s great at long distance travel, in fact, and will suit company car buyers who do a lot of miles. 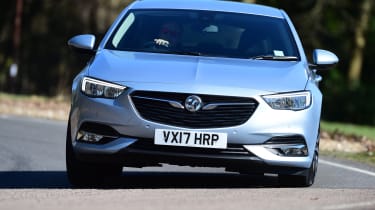 Plus, the Grand Sport is good fun on a twisty road, with tidy and enjoyable handling. The steering is well weighted and there’s enough feel to place the car on the road in confidence. There’s a bit of body roll, but weight savings over the previous model mean it’s more agile than you’d expect for a car of its size.

While it’s more fun than a Mondeo or Passat, the Skoda Superb is better in other ways, including the slicker manual gear change and more comfortable driving position.

The smallest 1.5-litre petrol engine that powers the cheaper Insignia models is a decent unit, and although it feels a bit underpowered in 138bhp form, there’s always the slightly more expensive 163bhp version to go for instead. It’s quiet and punchy enough for motorway overtakes without too much effort.

The GSi model came with a 256bhp petrol at launch, but at the moment it only features the 207bhp twin-turbo diesel. Our assessment of the petrol Insignia GSi revealed a genuinely sharp car, with a trick traction control system providing fun in the bends, plus pitch-perfect sports suspension and a nifty twin-clutch differential at the rear axle. Beefed up Brembo brakes add a reassuring slug of stopping power, too. The diesel version should be just as capable, albeit with a bit less top-end performance.

Vauxhall’s ’Turbo D’ badged diesels come in 1.6-litre (108bhp and 134bhp), 2.0-litre (168bhp) and twin-turbo 2.0-litre (207bhp) forms. Strong torque figures mean they all feel at least decently punchy, are economical and remain quiet on the move as well. When we performance tested the 168bhp version, we managed 0-60mph in 8.4 seconds, which was three tenths faster than a 2.0 TDI 150PS Skoda Superb. The 400Nm of torque the Insignia makes helped, which is 60Nm more than in the Superb.