If you want a petrol-powered Insignia Grand Sport, you can choose from two versions of the 1.5-litre engine. While the top-spec GSi model had a 256bhp 2.0-litre petrol at launch, this is no longer offered.

In the most basic Design trim the 1.5 140PS will return 50.4mpg on the combined test cycle, with emissions of 129g/km of CO2, although it's worth noting that upgrading to higher-spec trims with bigger wheels may well affect these figures. Move up to the slightly more powerful 165PS version and those figures remain unchanged, so it’s the version to go for if you’re keen on petrol power. Choose the 165PS auto, and emissions rise to 138g/km, while claimed economy is 47.1mpg. 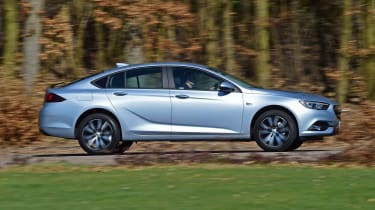 Go for a Turbo D diesel if you’d like to save money on running costs. The 1.6 110PS Ecotec engine emits 116g/km of CO2 and returns 64.2mpg, helped by the addition of smaller diameter wheels and narrower tyres. The 136PS version returns 61.4mpg and emits 121g/km, while adding an auto box trims these figures to 54.3mpg and 138g/km. Again, go for higher spec models, and their bigger wheels and tyres may harm MPG and CO2 figures.

The 2.0 Turbo D comes with a single or twin-turbochargers to make 170PS and 210PS, respectively. The single turbo version has official figures of 53.3mpg and 141g/km in six-speed manual guise, which only change slightly to 51.4mpg and 145g/km when you add the optional eight-speed auto.

The most powerful twin-turbo diesel is offered in Elite Nav and GSi Nav trims, and comes with the eight-speed auto and four-wheel drive included. As a result, economy and emissions are 39.8mpg and 187g/km, which is pretty poor for a diesel car these days.

As there's such a wide variety of Insignia models on sale, insurance groups range from Group 13 for the least powerful diesel model up to Group 28 for the GSi models.

According to our data on residual values, the Insignia Grand Sport won’t hold its value as well as most of its rivals. While Vauxhall has tried to promote it as an upmarket model, residual values of around 37 per cent across the range isn't much better than the Insignia it replaced. That means most versions will lose over £7,000 after three years and 30,000 miles.