Sharper new Volkswagen Tiguan proves to be more capable than ever

The old Tiguan was hardly a flop – Volkswagen sold over 2.6 million examples during the eight years it was on sale – but this new version is better in every respect. It’s more stylish, more practical and a lot more capable than it was before. Crucially, it also trumps its closest rivals in those key areas. While some cars may do all of this for less cash, you can certainly see where VW has invested the money.

The Tiguan is the first of an onslaught of new SUVs from Volkswagen due within the next four years, and the reason it will reach showrooms before any other model is that it’s the most important. The outgoing Tiguan trailed only the Golf and Polo in the UK sales chart.

This isn’t our first time behind the wheel of the Tiguan. Back in February, we sampled a late pre-production version in an icy and barren corner of northern Sweden. But this is our first real opportunity to test the car’s on-road characteristics and see if VW has delivered the goods.

The overall goal of a five-seat, family friendly SUV like the Tiguan is to be comfortable, practical and ultimately easy to live with. If you’re expecting something that goes round corners with real zip and the feeling that you’re driving something a lot smaller, then buy a Golf.

Where the Tiguan is designed to work, it thrives; the first prevailing impression  is just how comfortable it is on the move. The optional adaptive dampers certainly help with this. It would be unfair to call the Tiguan harsh in normal use, but select Comfort and the initial sharpness of the ride is softened – adding an extra layer of refinement to proceedings. Body control remains taut, and the steering strikes a nice balance between weight and feel. 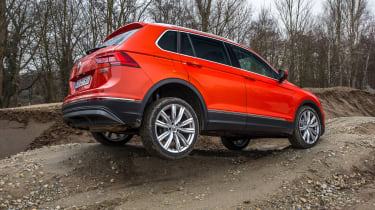 A whopping 95 per cent of Tiguan sales will be diesels, and the car tested here – the 148bhp 2.0-litre diesel paired with 4MOTION four-wheel drive – will take up a big chunk of that. It’s easy to see why, as VW claims close to 50mpg economy, while there’s enough grunt to cover everything from the school run to a weekend away with a caravan in tow.

The four-cylinder engine isn’t quite dead silent, yet it’s well isolated from the cabin, as well as relatively smooth around town at slower speeds. The seven-speed DSG auto box plays its part, shifting ratios at the earliest opportunity to maximise efficiency and reduce noise. Asking for instant acceleration can throw it off slightly as it searches for a lower gear, but overall it’s a slick and effortless means of transport for families.

• Volkswagen Tiguan XL and Coupe due to expand SUV family

A switch to the VW Group’s MQB platform means the Tiguan has had a useful growth spurt, so despite being lower than before, there’s actually more headroom. There’s plenty of legroom for three adults across the rear bench, too. 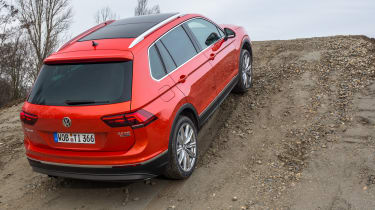 The boot has grown by 50 litres over the old model’s, meaning total load space rises to 520 litres; you can slide the rear seats forward to increase this further, to 615 litres. Dropping the rear bench altogether raises the capacity to a healthy 1,655 litres.

There are no real surprises inside, although the cabin is still very pleasant. The overall design and layout will be familiar to most by now, which means it’s sensible yet not overly stylish. Still, there are a few additions, such as a head-up display and the optional TFT instrument cluster, to lift it above many of its rivals. 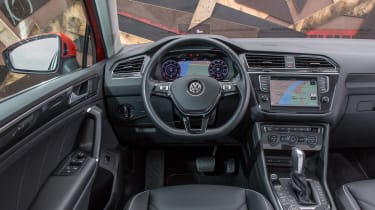 Proportionally, the VW is longer and wider than both the Nissan Qashqai and Renault Kadjar, but it can’t quite match the Mazda CX-5 for size. MQB tech makes the Tiguan around 50kg lighter than its predecessor, despite its new dimensions, so the petrol and diesels are up to 25 per cent more efficient. A plug-in hybrid with low CO2 emissions is due later in the year, too.

Away from the blinding motor show lights, the Tiguan’s styling looks the real deal. It’s muscular, angular and (to our eyes) up to the job of swaying what is now a very style-conscious market. VW isn’t known for its adventurous or bold designs, yet the new Passat has ushered in a fresher and more appealing image – and this SUV builds on that, with slim headlamps, a chrome grille and a defined shoulder line that stretches to the tail-lights. 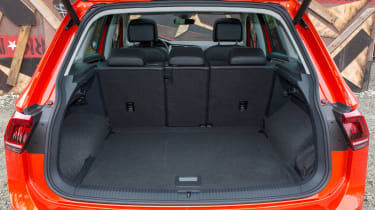 It’s a very handsome car indeed, but it comes at a price; a mid-spec 148bhp 2.0-litre diesel SE with the slick-shifting DSG auto box and four-wheel drive like ours will cost an almost eye-watering £30,480.

That’s a few thousand pounds more than an equally spacious and similarly specced CX-5, and approaching the money many buyers will spend on a BMW X1 or Audi Q3.