The new Volkswagen Tiguan is a quality car, but a few issues mean SE spec isn't quite the pick of the range 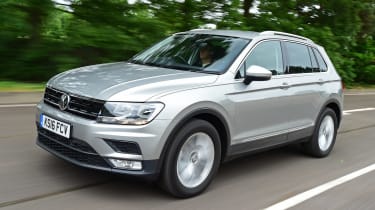 Sharper styling and all-new underpinnings mean VW’s new Tiguan is entering the ring looking to take on the leaders in the crossover class. But while it’s undoubtedly a quality product, a few issues with ride quality, CO2 emissions and engine performance mean this SE spec model we’ve tested isn’t quite the pick of the firm’s new compact SUV line-up.

As you’d expect from any new Volkswagen, this latest Tiguan has landed in the UK sporting sharper styling, improved performance and even better efficiency.

It’s the first model as part of a glut of new SUVs that we’ll see from VW over the next few years, and while on paper it’s got the credentials to cut it at the top of the class, out on the road it’s a slightly different story.

Let’s start with the engine. Our test car was fitted with the familiar 148bhp 2.0-litre turbodiesel mated to a six-speed manual gearbox. Start it up and it settles to a nice refined hum, but this doesn’t last for long as out on the road the unit needs to be revved surprisingly hard to make progress. 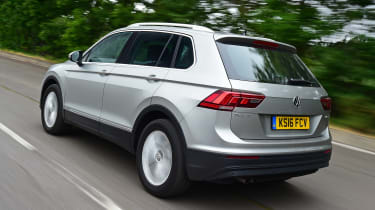 With fairly long gearing it means you tend to cruise just below 2,000rpm. As a result you often find yourself having to change down for a burst of acceleration, which means progress isn’t as smooth as it could be.

Extract all of the performance though and there’s a decent turn of speed to tap into. The Tiguan will sprint from 0-62mph in a respectable 9.3 seconds, but CO2 emissions of 125g/km means it’s not as clean as rivals – at this level only a few grams of CO2 can make all the difference in the important company car taxation classes; so the Tiguan’s higher emissions could count against it. That said, claimed fuel economy of 58.9mpg is strong.

VW’s latest crossover is now underpinned by the group’s all-conquering MQB platform, which you’ll also find under the Golf, Passat and Audi A3. But while this delivers precise steering and an agile chassis, it doesn’t quite serve up the ride quality we’ve come to expect from other cars using this setup. 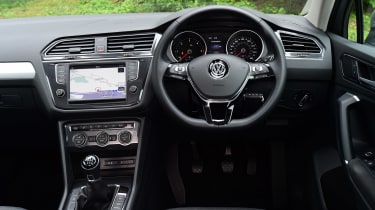 With the Tiguan’s higher ride height, shorter wheelbase and longer travel suspension it tends to find itself unsettled by bumps that a Passat would glide over, and this on our SE-spec test car’s relatively lowly 18-inch wheels.

SE trim starts from £25,260 with the 2.0 TDI model we’ve tested here coming in at £27,310, which is a significant sum compared to cheaper rivals like the Renault Kadjar, which get much more kit as standard.

Along with those alloys you get an eight-inch touchscreen infotainment system featuring DAB radio and Bluetooth, but sat-nav is a £725 extra. Parking sensors, climate and cruise control are also all on the standard kit list, but leather is another £1,750 while even heated seats are a £275 option. 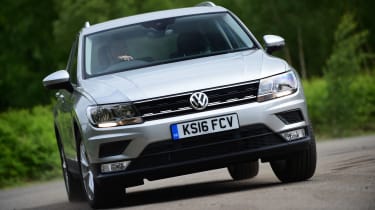 What standard equipment there is is nicely integrated though, with VW’s familiar functional and clean-cut approach to interior design. It’s much the same outside, where the precise panel pressings, sharp angles and bold surfaces give the car a more distinctive look compared to its anonymous predecessor. SE trim gets plenty of black body cladding to reinforce the crossover theme, too.

Its chunky stance on the road stems from the VW’s dimensions, as this is one of the biggest crossovers in its class. But at least this ensures there’s plenty of room inside, as with a 615-litre boot the Tiguan will nearly swallow as much as some SUVs from the class above.

There’s no doubting the Tiguan is an improvement in plenty of areas then, but it’s pricey and, in a sector where style counts double, it’s maybe a little safe in design terms.

But a high-quality interior, acceptable performance and VW’s classless image are enough to ensure that this compact SUV has the potential to climb to the top of the sales charts and repeat the success of its predecessor.