We get to drive the Volkswagen twin up! - VW’s latest eco concept that will debut at the Tokyo motor show 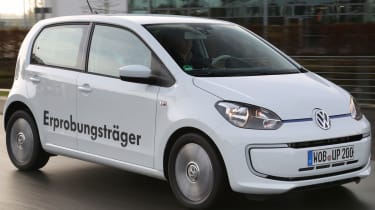 The VW twin up! continues the up! family's impressive progress. With its combination of incredible fuel economy and a lengthy range don’t expect to see much of your local filling station attendant. That diesel engine is a little rowdy and performance sluggish, while around £17,500 might be a lot to pay for an up! But this cut-price plug-in hybrid could seriously slash your fuel bills.

VW’s wacky eco hero, the 313mpg XL1, may have hit the headlines for the wrong reasons recently with a price tag perilously close to £100,000, but that car was only ever a pace setter for technology that would filter through to the rest of the range.

And the first example of that is the VW twin up!, a plug-in hybrid featuring the XL1’s 47bhp 0.8-litre two-cylinder diesel engine and an electric motor with the same 47bhp output. However, the layout is reversed – in the up, the engine and motor are at the front with the batteries under the back seats.

Volkswagen claims average economy of 256.8mpg for the twin up!, but equally astonishing is a price that we’re told will be less than next year’s all-electric e-up!. That’s expected to cost around £18,000 after the government chips in with £5000, so lets guestimate £17,500 for the twin up!. That still sounds like a lot of money for an up!, but as plug-in hybrids go, it’s super cheap.

It’s not super quick, though. In hybrid mode with the engine and electric motor doing their best, 0-62mph takes a leisurely 15.7 seconds. In electric mode, progress is as serene as you might expect, especially with the up!’s supple ride left intact despite the weight of the batteries.

But kick down and the little diesel growls into life and remains an ever present, with an annoying snore around town. It’s better at a cruise, though, where the up! again impresses with its grown-up feel.

As with so many of these hybrids, the brakes take some getting used to as they clamour to capture energy to recharge the batteries. But generally the up! is a pleasure to pilot around city streets and a little further beyond, too.

Electric-only range is 31miles before a three-hour recharge from a household socket. But total range is claimed to be over 600 miles, in spite of the measly 33-litre fuel tank.

Apart from a slightly longer, more aerodynamic front end with VW’s eco signature LEDs it’s pure up! So there’s impressive space for something so small, excellent build quality and a real big-car feel.

The twin up! will make its global debut at the Tokyo motor show later this month and could go on sale within 18 months. But we’re set to see much more of the modular tech as it’s eventually rolled out within the VW group range, with two, three or four-cylinder diesel engines and different-sized electric motors.