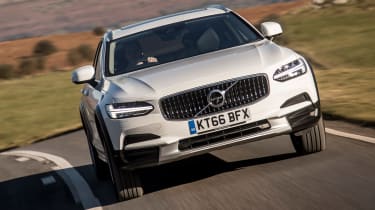 The V90 Cross Country still shows that, two decades on from its conception, the premium crossover-estate is a very appealing proposition. Buyers are still expected to flock to the XC90 SUV, but the estate’s sleek style, strong practicality, upmarket cabin and decent on-road manners should maintain a loyal following. The fact that it’s still a capable off-road car is the icing on the cake.

Crucially, Volvo also beat rival Audi to the punch, undercutting the German outfit’s strikingly similar ‘Allroad’ conception by two years. Two decades on and it is still Sweden versus Germany, as the new V90 Cross Country has arrived to take on not just the established Audi A6 Allroad, but now also the upstart Mercedes E-Class All Terrain. Our first UK drive of the Volvo aims to see if the original recipe can still deliver. 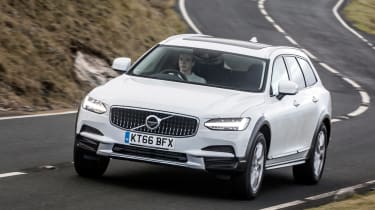 It’s certainly business-as-usual on the outside. A 65mm increase in ride height – 5mm of that due to higher profile off-road tyres - plastic wheelarch and lower body extenders, skid plates and hollowed-out Cross Country lettering on the rear bumper are all design traits found on the original model. It’s familiar, then, but the V90’s sleek and modern profile is a world away from the ‘box-on-wheels’ silhouette of old Volvos. We think it looks great, and far more fresh and distinctive than the now five year-old Audi.

Step inside and you can almost forget that you’re in the Cross Country version, as there’s precious few differences between it and the regular V90. Only specific cross-stitched leather and matte wood dash inlays tell it apart. Regardless, it’s still an exceptionally comfortable and pleasing place to spent time in, with rich, mostly solid materials and a minimalist yet upmarket design. Volvo asks for an extra £1,500 over the equivalent Momentum AWD model, with similarly generous levels of kit on offer including the nine-inch touchscreen sat-nav system, LED headlights, an electric tailgate and the semi autonomous ‘Pilot Assist’ function.

It’s as practical as ever, too: there’s masses of space for rear seat passengers, and despite the 560-litre boot being smaller on paper than a few rivals, it’s still a versatile and useable space, with neat features such as a gas strut to lift the boot floor and buttons to electrically fold the rear seats.

The driving experience is generally pretty accomplished. Our car came fitted with 232bhp D5 diesel engine using the brand’s innovative ‘Powerpulse’ technology. In basic terms, it stores high-pressure air ready for release into the turbo on demand, eliminating the lag often present in engines of this type. 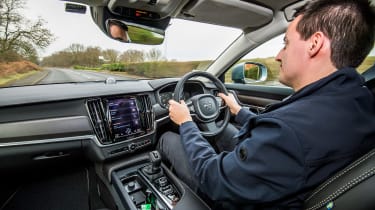 The system doesn’t make the V90 faster outright, but means it feels more responsive to throttle inputs at any revs. It’s a pleasingly punchy and, for the most part, refined unit that belies its modest size thanks to 480Nm of torque, although it doesn’t feel massively quicker than the cheaper D4 when driven back-to-back. Rivals’ six-cylinder engines are also a touch smoother and less intrusive at lower speeds.

Alongside the 65mm ride height increase, Volvo has widened the front and rear tracks of the Cross Country to boost stability and allow the chunkier tyres to do their thing off-road. Volvo engineers say that they have tuned it to feel much like the regular V90 on the road, and they have achieved this target. Driven back-to-back on road routes the Cross Country feels less different than you might expect, with the same soft and well-damped ride evident. Unfortunately, larger bumps and surface ripples can still upset its composure, even with our car’s optional adaptive dampers and rear air suspension. There’s also a touch more pitch and wallow evident in high speed cornering – though arguably that’s not as big a concern for buyers. 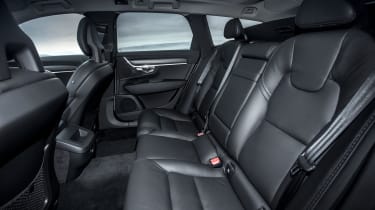 Still, for the most part, this is a very comfortable and refined way to travel, particularly as the off-road tyres don’t seem to add much extra road noise. A trip round an off-road course also showed the Cross Country’s impressive dual personality, with the dedicated off-road mode and standard hill descent control, plus a good amount of ground clearance, giving it enough capability to keep up with most full-size SUVs.