Well known engines but an all-new platform beneath them. Decent Driver Power manufacturer score, though

The Kona features an intriguing mix of old and new. Its turbocharged petrol and diesel engines are relatively proven units from elsewhere in the company's line-up, but the mechanical components underneath them - the chassis, in other words - was entirely new in the Kona.

Even so, we'd expect that the latest design and construction techniques should deliver respectable reliability - especially when the known quantities of the engines and transmissions are taken into account.

Hyundai finished in 22nd place out of 30 manufacturers in our 2019 Driver Power survey, rating highly for reliability, user-friendly controls and interior space. A relatively low 13.1% of owners surveyed reported experiencing a fault with their cars.

It’s too early to comment on the Kona EV’s reliability but, like most electric cars, there’s little which can go catastrophically wrong with the major mechanical components. Hyundai also offers a five-year unlimited mileage warranty and a five-year roadside assistance programme. 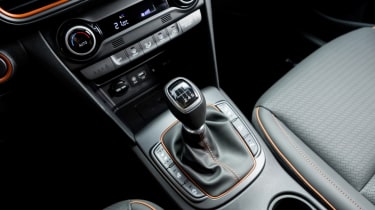 Some of the more expensive editions include rear cross-traffic alert and the range-topping Premium GT model gets a safety pack that brings pedestrian recognition as part of an autonomous emergency braking system. It's good to see, too, that this top-line feature is available as an option, even on the most basic S trim level.

Hyundai has one of the strongest warranty packages on the market, and the Kona gets the same level of cover as any of the Korean brand's other offerings. That means a five-year warranty with unlimited mileage; only Kia's seven-year deal offers a longer period of cover.

Kona service schedules are every 12 months, and costs in 2018 were quoted at around £170 for a minor service and £230 for a major. Like other Hyundai models, the Kona has service plans available, which can be arranged and added to any finance you might take out.

Thanks to its fewer mechanical parts, the Kona Electric has service costs that are around £100 less than they are for the combustion engined models.