Can hatchback’s new efficient engines propel it back to the top of the class? 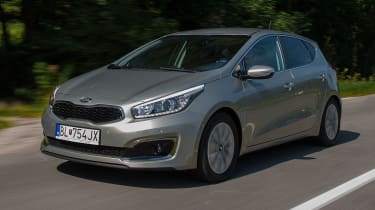 The new 1.0 three-cylinder turbo engine adds efficiency and cuts emissions in the facelifted 2016 Kia Cee’d. It’s been a long time coming, but the downsized unit has certainly been worth the wait, delivering adequate performance and lower running costs. Kia has also improved ride quality and refinement, as well as the quality and styling both inside and out with a few minimal changes, all of which puts the Cee’d back in the running in the family hatchback sector.

With more than one million units sold since its launch in 2006, the Kia Cee’d has been a resounding success for the firm. However, compared to many modern, more frugal family hatchbacks, the current Cee’d was in danger of looking a little old hat.

Not any more, as the Korean brand is back in the running with this facelifted 2016 Kia Cee’d, adding a new high-efficiency 1.0-litre three-cylinder turbo petrol engine and a more advanced seven-speed dual-clutch gearbox to the range, as well as subtly updating the styling, too. It’s Kia’s new downsized engine that’s the big news, though, so we got behind the wheel to find out what it’s like. 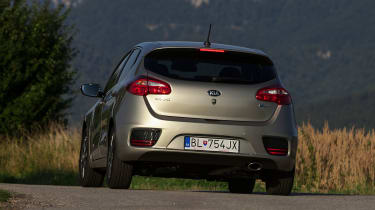 Thankfully, the answer is good. The new unit puts out either 99bhp or 118bhp, depending on which model you go for, but both blend decent performance with a much needed boost in fuel economy.

We tried the 118bhp unit, in which the 0-62mph sprint takes 11.1 seconds, but it’s the extra torque in the mid-range that gives this engine the edge over the old naturally aspirated petrols. 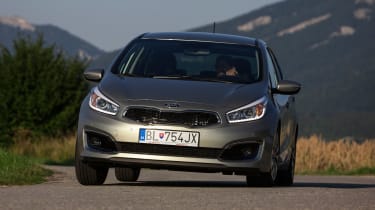 Both 1.0 litres produce 171Nm, which gives strong in-gear acceleration – you don’t have to work the six-speed manual gearbox too hard (it’s no great shame if you do, as it’s light and slick to use), helping to make more relaxed progress over the thrashier 1.4 and 1.6 petrols.

Being a turbo engine, the noise is muted, with better cruising refinement, but there’s still a hint of characterful three-cylinder thrum from under the bonnet. 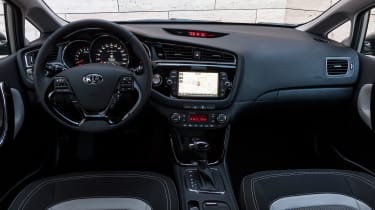 There’s no doubt performance is improved, but the real benefit of moving to this downsized unit is efficiency. Compared to the old 99bhp 1.4’s average 47mpg combined, the equivalent 1.0 ecoTurbo unit delivers a best of 60.1mpg, so it should be much cheaper to run and not much more expensive to buy. 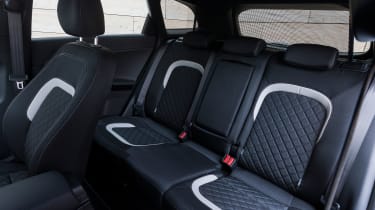 The wider range of engines  are all now EU6 emissions-compliant. The older 1.4 and 1.6 petrols are still available, as are the 1.4 turbodiesel and a choice of 1.6-litre CRDi diesels. Opt for the higher-powered 134bhp version of the latter and you’ll be able to add Kia’s new seven-speed dual-clutch gearbox.

With 300Nm of torque from the gutsy diesel it means the DCT transmission suits the car’s character, but the shifts aren’t as snappy as we’d hoped, with a pause between pulling the paddle and getting a new gear, which gets worse if you ask for two quick changes in succession. Volkswagen’s DSG box is still top of the class, but Kia’s seven ratios help to keep the engine on the boil so you can make smooth progress. 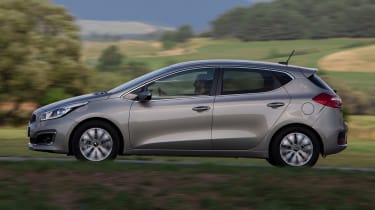 Kia hasn’t limited changes under the skin for this new Cee’d to just the engines and transmission. Tweaked steering and a new torque vectoring system mean the Cee’d is more agile, according to Kia.

In day-to-day driving it’s hard to tell, but push the car a bit further and the benefits are more obvious. What is apparent is the improvement in ride quality and refinement – sporting some revised hardware underneath, Kia’s family hatch felt more comfortable on the cruise and supple over bad tarmac on our test drive. 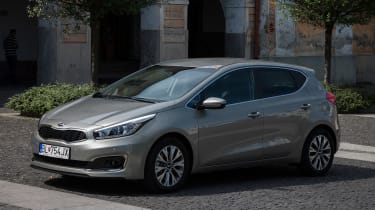 Kia has added new optional features in the cabin, too, including a speed limit information system, blind spot detection and rear cross traffic alert to warn you of on-coming cars when backing out of a space. Expect the new Cee’d to retain the old car’s five-star Euro NCAP safety rating, although it still lacks advanced features like autonomous braking, unlike the class leaders.