Not exciting to drive, but ride and refinement are right towards the top of the class

The update to the Discovery Sport range in 2019 brought a strengthened chassis, making it 10% more rigid than the previous model. This, plus revised engine and subframe mounting points for the engine and suspension subframe, means that it’s more refined than ever before. It’s really noticeable out on the road, where tyre roar and suspension noise are better suppressed than in many rivals.

It helps with engine refinement, too. In some applications, Land Rover’s range of Ingenium four-cylinder petrol and diesel engines can sound a little harsh, but they’re so well isolated in the Discovery Sport that they're quieter than the equivalent units in the Mercedes GLC.

Petrol and diesel units both have 2.0-litre capacities; the former comes in a choice of 197bhp and 246bhp versions, while the three diesel options range from 148 to 237bhp. Mild-hybrid tech features across much of the range, helping to reduce fuel costs and give a smoother power delivery.

Land Rover has also introduced the P300e plug-in hybrid model to the Discovery Sport range. With an all-electric range of up to 38 miles, the P300e is powered by a 1.5-litre three-cylinder petrol engine, combined with an electric motor to deliver a total power output of 305bhp.

A six-speed manual gearbox is available on the entry-level diesel; the only car in the range to send drive to the front wheels alone. Every other car uses four-wheel drive and a nine-speed automatic transmission. Though the gearbox is not quite as responsive as some rival systems, it’s very smooth and makes the most of the available performance by keeping engine revs in the mid-range where the engines are most subdued. 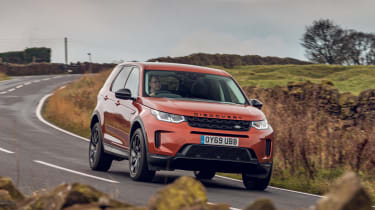 The Land Rover’s relaxing character is enhanced by a composed ride. There’s a firm edge to the suspension at low speed that means it's less cossetting than a Mercedes GLC (at least one on air suspension), but the multi-link rear axle comes into its own the faster you go. Most bumps and potholes are effortlessly smoothed out.

The Discovery Sport isn’t the sharpest SUV to drive, but it handles as well as it’ll need to for most buyers. Body movement is well controlled, and there’s plenty of grip even on the standard fit all-weather tyres; the electronically controlled permanent four-wheel drive system delivers confidence-inspiring traction, even in the slipperiest conditions. The steering feels fairly slow compared to a GLC or a BMW X3, but it’s precise enough. Combined with the high-set driving position and excellent visibility, it allows you to place the Disco Sport on the road with confidence.

At times the Discovery Sport does feel quite large though, and while the view ahead is great, the standard rear camera and parking sensors are essential when reversing – that stylish rear screen looks letterbox narrow from the driver’s seat. It’s improved with the fantastic ClearSight high-definition rear-view screen: a switch on the rear view mirror allows for live images – relayed from a camera mounted on the roof – to be displayed. It’s great in bad weather or if the rear seats are full of passengers, while the wide angle lens all but eliminates blind spots.

Where the Land Rover steals a march over rivals such as the Jaguar F-Pace and BMW X3 is off the beaten track. It has better ground clearance, while the front and rear overhangs are shorter and higher, so steep slopes are easily negotiated. Its Terrain Response system can adapt the four-wheel drive’s traction control to suit different conditions, helping the car go further than most owners would dare to take it. Just choose between Normal, Mud, Sand, Rocks and Snow modes, then let the car’s sophisticated traction control system do the rest.

But that’s not all – you also get a variable hill descent control, an impressive wading depth of 600mm, plenty of ground clearance and excellent approach and departure angles. When the going gets tough, the Discovery Sport leaves its compact SUV rivals floundering.

While the six-speed manual gearbox is pleasantly smooth to operate – if a little long of throw – it doesn’t really fit the character of what is a very refined, laid back family car. The automatic gives a more apt, fuss-free driving experience. However, it’s very slow to respond to downshifts relative to rival systems used by Mercedes and BMW. 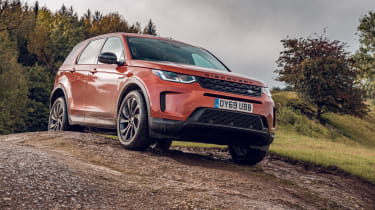 The base engine is a little short on power too – and that’s before you start to load up the car with people and things. Specify the 178bhp 2.0-litre with an automatic gearbox and you’ll hit 0-62mph in 9.1 seconds, which is 1.6 seconds quicker than the 148bhp version. This model will just about cope with most of what’s thrown at it, but for those who want more shove, the top diesel will whip you to 62mph in 7.2 seconds with a top speed of 137mph. Its extra 70nm of torque (430Nm versus the D180’s 360Nm) will be very useful when carrying heavy loads, too.

Customers can also choose from two Ingenium 2.0-litre four cylinder turbo petrol engines. The 197bhp variant does 0-60mph in 8.5 seconds with a 129mph top speed, while numbers for the 247bhp range-topper are 7.1 seconds and 140mph. They're surprisingly good fun to drive, with a willingness to rev and a racy induction roar to accompany it, although poor fuel economy figures mean that they'll be a niche choice in the UK.

The new plug-in hybrid model, with its combination of a 1.5-litre petrol engine and a 15kWh battery driving an electric motor, offers customers improved economy and lower emissions. It also provides a decent turn of pace - along with a total output of 305bhp, there's also 540Nm of torque which helps propel the Disco Sport from 0-62mph in 6.2 seconds.