Range Rover design cues are clear outside, while the inside is packed with clever tech

You only have to glance at the Discovery Sport to confirm it’s a Land Rover product but while the changes to the 2019 model were extensive under the skin, it’ll take a very keen eye to spot the changes from the outside.

As before, there’s the distinctive clamshell bonnet, the option of a contrasting roof, plus clean, simple body surfacing. Look closely, though, and you’ll notice new head and tail lights, plus a neater look for the bumpers both front and rear. There are a couple of new wheel designs ranging from 17- to 21-inches in diameter.

As per the Range Rover Evoque, you can personalise the Discovery Sport further. In addition to the contrasting roof there’s the option of the Black Exterior Pack which adds a black finish to the grille, door mirrors, and exterior trim. Pick a bold colour such as Namib Orange metallic and the Land Rover really stands out.

Inside, the Discovery Sport is pure Land Rover. The mid-life facelift brought wide-ranging improvements to the cabin, although the overall square, sturdy-looking layout remained. The big changes came to the infotainment tech. The much-improved touchscreen display now incorporates Apple CarPlay and Android Auto as standard, while top trim levels have a gorgeous, customisable 12.3-inch driver’s display in place of odd-looking half-analogue/half-digital dials. 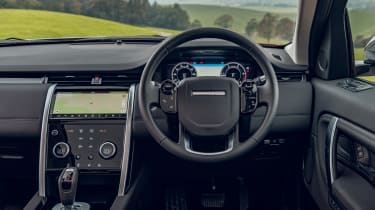 Many recent JLR products use a third display, which controls secondary functions like heating and ventilation. The Discovery Sport does without, instead using a pair of physical knobs. The multifunction items adjust the heating in their normal position setting, but push the dials in and they adjust the seat heaters and pull them out and they can tweak the fan speed (passenger side) or change the driving modes (driver’s side). As before, they all feel robust and look great.

Overall build quality feels solid, but the sliding middle row of seats fitted to the long-term test car we ran tended to squeak and rattle. One minor niggle is with the driver’s footwell, which is awkwardly shaped, so you might struggle to find a comfortable position for your left foot.

As part of a range of 2019 model year updates, Land Rover overhauled the Discovery Sport's infotainment system. All models get a 10.25-inch touchscreen system, which looks sharper and is far snappier than on previous models. The basic menu layouts are the same, which means that some of the icons are a little more fiddly to use than in several German rivals. If you prefer to make the most of your smartphone’s processing power then Apple CarPlay and Android Auto are also standard.

There’s also a new digital driver’s display, and it’s one we can highly recommend. The 12.3-inch screen lets users switch between driving, navigation and entertainment functions - or a combination of them simultaneously. It looks fantastic and feels fairly intuitive. 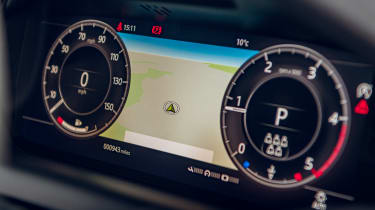 There’s also the option of another display: a flick of a switch on the smart rear view mirror turns from a regular reflective panel into a screen which relays images from a roof-mounted camera. It takes some getting used to – those used to a conventional mirror will naturally focus into the distance to see behind rather than the screen’s close-up images - but otherwise it works brilliantly.

Then there’s Land Rover’s Clear Sight Ground View tech. This uses three forward-facing cameras to not only view the road ahead, but create a real-time image of the road directly ahead of and below the car, plus its relative position to the wheels. It’s perfect for not only off-roading around difficult obstacles, but also parking close to high kerbs.

The features don’t end there. Wireless charging, a 4G WiFi hotspot and a variety of USB and 12-volt connections are dotted around the cabin. Music fans will appreciate the glorious 11-speaker Meridian sound system that’s available on HSE models; the rest of the range uses a simpler six-speaker setup.