When the Discovery Sport first came out, it represented a big step upmarket over the Freelander it replaced. It took a further move in a premium direction in the 2019 round of updates, and that’s reflected in the price. Prices start from just under £32,000, while the range-topping R-Dynamic HSE is around £51,000. On the plus side, you do get plenty of kit for your money.

In 2019, Land Rover introduced mild-hybrid setups to the range, with all but the manual D150 benefitting from the tech. The 48-volt system recovers energy that would otherwise be wasted when decelerating, stores it in a compact lithium-ion battery below the front seats, and deploys up to 140Nm of torque under acceleration to reduce the load on the combustion engine. It works alongside a stop/start system that’s able to switch off the engine below 11mph – allowing a few extra metres of fuel-free coasting. Land Rover reckons that the system boosts fuel efficiency by seven percent.

Despite this, the engines are still towards the thirstier side of the class. Based on the latest WLTP test structure, even the most efficient D150 achieves up to 46.3mpg – depending on wheel size – and emits from 159g/km. The D180 achieves a maximum 39.6mpg and emits 183g/km, while the D240 is only slightly thirstier, achieving 38.8mpg and 187g/km. 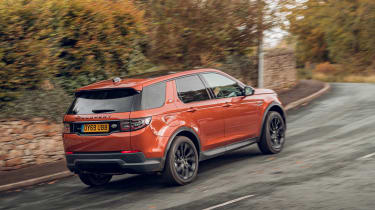 The petrols will be quite steep to run, given their fuel usage. In official tests, the P250 petrol manages best economy of just 29.9mpg and emits 210g/km of CO2, while the lesser P200 petrol improves on these figures by just a fraction at 30.2mpg and 208g/km.

Buyers now have the choice of opting for a Discovery Sport plug-in hybrid model, which has the ability to travel up to 38 miles on pure electric drive alone. If charged on a regular basis the P300e petrol PHEV is able to return a claimed 175.5mpg, with CO2 emissions of 36g/km.

Insurance groups are between 27 and 42 depending on engine and trim, which puts the Discovery Sport on a par with its main rivals. Good parts availability and top-notch safety features including sophisticated engine immobilising technology keep insurance costs down.

It’s good news for private buyers; our experts have calculated the Land Rover will hold on to between 44 and 51% of its new value after three years and 36,000 miles.