Practicality and versatility are the main draws of the Land Rover Discovery Sport, with a huge boot, seven seats and masses of space

While the 2019 updates to the Discovery Sport introduced new tech and hybrid systems, little of it altered the car’s practicality. That means there’s still a 5+2 seating layout, which makes the Discovery Sport rare in the compact premium SUV class. The rear two seats themselves are a little cramped for adults, but fine for kids.

The two individual rearmost chairs can be pulled out of the floor of the boot in one movement, while a sliding middle row allows for easy access and increased legroom. With the rearmost seats stowed the boot boasts a massive 981-litre capacity – although this figure is measured to the roofline rather than under the load cover. Under the cover there’s a similar amount of space as in the Jaguar F-Pace, but there’s less underfloor storage.

Fold the rear bench flat and the available space increases to a van-like 1,698-litres. There are also a number of handy hooks and a 12V power supply, plus the option of an adjustable loading rail system. 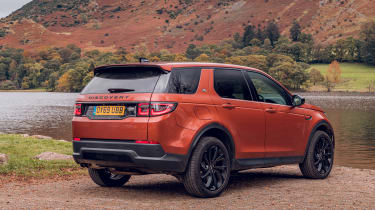 Elsewhere in the cabin there’s plenty of useful storage, numerous cup holders and the availability of up to seven USB sockets – so everyone can charge their smartphones at once.

The use of an electric handbrake frees up space on the transmission tunnel for a pair of lidded storage boxes, while there’s a neat trinket tray set into the dashboard ahead of the front seat passenger.

Add all that to the fundamentals of good passenger head- and legroom (for the first five of seats, at least) and it doesn’t take long to realise a lot of thought has gone into the Land Rover’s family-friendly layout. Cubby spaces, though not lacking previously, are now more spacious following on from the 2019 updates.

The Discovery Sport looks a little rear-heavy in profile, but, in fact, this seven-seat SUV is shorter than the five-seat Lexus NX. It’s shorter than the Audi Q5, too – testament to how clever its packaging is.

It is relatively tall, although that doesn’t really make it feel any bulkier from behind the wheel – in SUV terms, the Discovery Sport seems relatively compact, especially given its carrying capacity.

The additional height compared to rivals endows the Discovery Sport with a feeling of space for all occupants – especially HSE models equipped with the panoramic glass roof.

The middle row comprises three proper seats, and although the middle chair is a little thinner, the middle passenger won’t feel hemmed in. All three get plenty of knee- and foot space because the floor is flat, thanks to clever packaging of the transmission tunnel, and because the row can slide by up to 16cm backwards and forwards. The relatively flat chairs are soft and comfortable.

Access to the rearmost seats is easy because the back doors open almost to 90 degrees and the middle row tilts forward in one easy motion to reveal a wide access. Clearly, room is limited in these two chairs, but they’re fine for short distances. 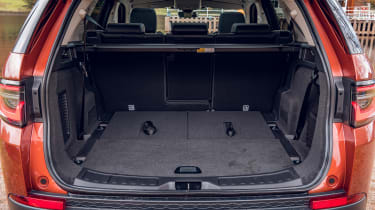 The 981-litre boot is big compared to, say, the Audi Q5’s 540-litre space – although, again, that measurement includes the space above the parcel shelf. With all five rear chairs down that goes to 1,698 litres, which gives us a fairer like-for-like size comparison: the Audi Q5 offers 1,560 litres on this basis.

All of the Sport’s space is usable because the chairs all fold completely flat, meaning the car is a dream for the regular visitor to Ikea. The remotely operated electronic tailgate of SE Tech models and above is very useful when loading, but even without that, the boot is very well thought out – from basics like a square shape and flush lower lip, to the myriad hooks and optional rail system. The middle row folds in a 40:20:40 split.

The Land Rover Discovery Sport has a range of different towing capacities: 1,800kg, 2,000kg and 2,200kg of braked weight. If you want the latter, then you will need to look at the more torquey diesel options; both of these come with four-wheel drive and an automatic gearbox. If however, you would prefer to have just two-wheel drive, it will mean that you lose 200kg of load capacity.