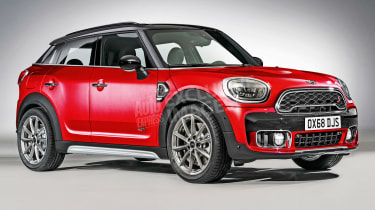 MINI is considering adding a coupe version of the all-new Countryman to its range as an indirect replacement for the old Paceman, Auto Express can reveal. Our exclusive main image shows how the new car could look – although it’s not known whether this model will be the fifth and final model in MINI’s product range or simply an extension of the Countryman line-up.

We spoke to BMW Group design chief Adrian van Hooydonk, who told us that the company was weighing up a different take on the Paceman formula. The new five-door coupe would likely launch in 2018, giving the all-new Countryman some breathing space when it lands early next year.

“Part of the issue was the three doors,” van Hooydonk told us. “We have looked into a lot of things, but all of our [BMW] SUV coupes are five-door vehicles.

“As much as people probably drive the cars with only one or two people, they like the comfort of an extra set of doors. They want to carry extra stuff – throw a bag in the rear or take someone.”

The coupe will sit on the same UKL1 platform as the new Countryman, but as our image shows it will sit lower to the ground and feature a more aggressively raked roofline. It will be a direct rival to cars like the Range Rover Evoque, and offer a similarly compromised rear cabin and boot.

Due to its shared platform, the new Paceman is likely to lift the Countryman’s range of three and four-cylinder engines unchanged. That means the same entry-level 1.5-litre Cooper, more economical Cooper D and racy Cooper S. A flagship John Cooper Works hot SUV is also an option.

“At the moment we are laying the foundations for the next-generation MINIs,” van Hooydonk told us. “There are a lot of things that we are discussing. What type of technology, what type of design, and what type of vehicle line-up. I am involved in this on a daily basis.

“We have turned MINI from one car into a brand. We have managed to attract people to the brand who knew the old car – but you can’t ask people to compromise any more.”

Elsewhere in the BMW Group, the X4 and X6 coupe-SUVs have enjoyed huge success, with a third model, the X2, due in dealers by 2018. A new MINI Countryman coupe would undercut the X2 despite sitting on the same platform, with prices likely to start at around £25,000.

What do you think of our exclusive image of the new MINI Countryman Coupe? Let us know below...