The Countryman’s exterior look is divisive, but the attention to detail in the interior is impressive, while quality and tech are both top notch

Given that MINIs are designed to appeal to more fashion-conscious buyers, the Countryman has to look good. While this is subjective, the bulkier Countryman Mk2 appears to push the brand’s design language to its limit.

The front-end design, with its gaping front grille and bulbous headlamps, looks a bit awkward, while the squared-off rear isn’t much better. At least there’s neat LED running lights (with full-LED lights on the options list), while rugged crossover styling traits like the plastic lower body cladding and roof rails give it presence.

Still, chances are that if you liked the outgoing Countryman’s styling, you’ll still like this. There’s plenty of scope for personalisation, with contrasting roof and mirror colours available. You can team this with bonnet stripes and themes, but these hike the price. The S E hybrid also comes with yellow badging to mark it out.

Inside, things are less controversial. The design is typical MINI, with overstyled yet neat touches like the huge circular display and chrome toggle switches. MINI removed the central speedo and used traditional dials ahead of the driver, while the crisp new central display is now surrounded by multi-colour LED lights. These change hue according to speed, settings and display modes.

Quality is largely excellent, too. The materials for the seats feel classy, while a mixture of soft touch plastics on the dash and fabric trim on the door pulls lifts the ambience. Glossy black trim on the dashboard feels solid and looks upmarket, too. 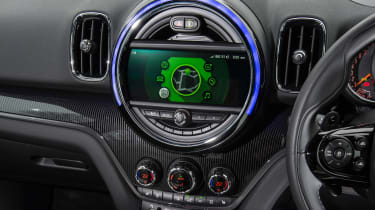 Delve into the huge options list and you’ll find ambient lighting packs, which light up the cupholders, door handles and even shimmer through the black dash inlays in whichever colour you desire.

You can spend thousands speccing up a MINI with all sorts of customisation choices, but the standard models are reasonably well-equipped: A Cooper Countryman Classic gets sat-nav, a DAB radio, cruise control, parking sensors and Bluetooth as standard.

The standard infotainment system is a 6.5-inch colour display with sat-nav including European mapping, DAB digital radio and Bluetooth connectivity. For about £950 extra, you can upgrade to MINI’s 8.8-inch Navigation Plus system.

The big news with this is that there’s now touchscreen capability. However, it still retains the scroll wheel and buttons, and it’s actually easier to use these than to navigate around the system, because some of the touchscreen icons aren’t all that simple to select.

Go for the £950 Navigation Plus pack that adds the XL nav system and you also get MINI’s Connected XL function, which adds a head-up display.

Standard connected services on all models include compatibility with an iPhone or Apple watch through MINI’s Connected app, while CarPlay is also included when adding the Navigation Pack (Android Auto isn't offered). There’s also the usual Bluetooth streaming for music, plus the Media pack includes enhanced Bluetooth for better sound quality on calls and wireless mobile phone charging.