The Countryman is competitive across the board for running costs, justifying its high purchase price 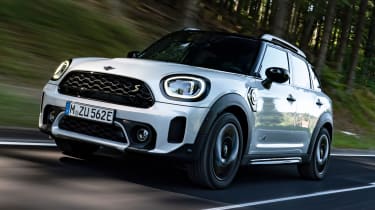 Modern MINIs are about paying a little bit extra for the increased desirability and quality. As such, the Countryman isn’t exactly the cheapest small crossover to buy, but at least it shouldn’t prove costly to run.

Under the latest WLTP fuel economy tests, the most economical, non-electrified Countryman is the Cooper D. Its claimed fuel economy figure of up to 54.3mpg is good, while CO2 emissions of 129g/km give reasonable Benefit-in-Kind ratings. Add an auto box, and 51.4mpg is quoted, while ALL4 four-wheel drive sees the Cooper D return up to 52.3mpg, with CO2 emissions from 142g/km

To really cut your costs, the Countryman S E PHEV plug-in hybrid is the one to go for. It has emissions of 43g/km, and the ability to travel around 29 miles on electric power alone. MINI claims an overall economy figure of up to 166.2mpg, but as with any plug-in hybrid model, you'll have to regularly charge the battery to get anywhere near this figure.

If pure petrol power is a must, you shouldn’t be too disappointed with the base Cooper’s combined economy figure of 44.8mpg – although that may be tricky to achieve in the real world. The Cooper S claims up to 42.8mpg, while the top-spec JCW version returns 37.2mpg on the combined cycle. 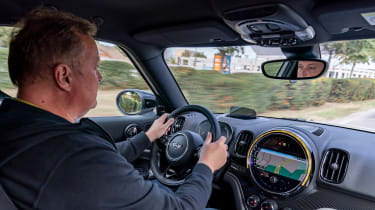 Insurance groups currently range between 18-27, which is higher than the old car. Most models fall into the lower end of that scale, however, with the standard Cooper and Cooper D slotting in at group 18 and 20 respectively. The plug-in Cooper S E Hybrid sits in group 27, highlighting the complexity of its hybrid drivetrain and potential repair costs.

The MINI Countryman is predicted to hold onto 48% of its value after three years, on average. That’s slightly down on an Audi Q2, but better than a number of similarly priced crossovers.