The new Porsche Panamera Sport Turismo is the brand’s first ever estate, and we try for the first time in the UK in Turbo form 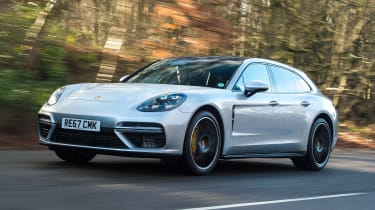 The Porsche Panamera Sport Turismo isn’t a full-on performance estate – it’s still not practical enough for that. But it’s a brilliant alternative to an SUV if you still want GT-style driving dynamics blended with 4x4 usability. In Turbo form it’s blisteringly quick, but doesn’t trade refinement or comfort, while the tech and quality on offer is as advanced as any rival. However, you get the majority of this with the cheaper Panamera 4 or 4S Sport Turismo.

Porsche might be known for its sports cars, but the brand’s practicality offering is now broader than ever. An all-new Cayenne has joined the baby Macan SUV in the range, and here we’re trying Porsche’s first estate car – the Panamera Sport Turismo – for the first time in the UK in £118,828 Turbo form.

Based on the standard Panamera, the Sport Turismo has the same wheelbase and length, but thanks to its squarer rear roofline this svelte estate offers more practicality, with 520 litres of boot space.

This is only actually 20 litres more than the standard car, but there’s no denying that this small slice of extra usability gives it plenty of appeal – because it rides, handles and delivers the same level of incredible performance as the regular Panamera Turbo, too. 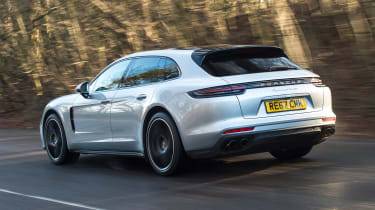 With four-wheel drive and launch control thanks to the eight-speed PDK dual-clutch automatic gearbox, which fires up through the ratios with rapidity and no jolting, the Sport Turismo will hit 62mph in 3.6 seconds and romp on to 188mph flat out.

The 542bhp twin-turbo V8 pulls with linearity thanks to the 770Nm of torque that’s served up from as low as 1,960rpm and sustained to 4,500rpm, offering strong punch in-gear for a 2,035kg car and a cultured V8 growl from the sports exhaust’s quad tailpipes.

For such a big vehicle it’s agile, too, thanks to the optional £1,536 rear-wheel steering that’s integrated into Porsche’s 4D Chassis Control – a networked system that connects the PASM adaptive air suspension, rear-axle steer, torque vectoring plus and clever anti-roll tech if fitted. 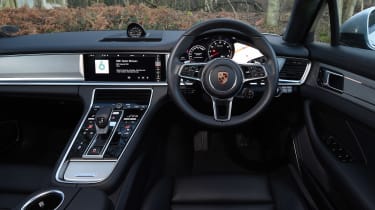 The steering is nicely geared and the Turbo generates sports car levels of lateral grip, so you can corner hard but with plenty of composure thanks to the adaptive dampers.

Despite our car’s optional 21-inch wheels, in Normal mode the ride is surprisingly fluid. Harsher jolts only occasionally send those big rims thumping into their arches as it’s nicely compliant. Sport and Sport Plus sharpen the powertrain and firm up the air suspension as you’d expect, and on ridged roads the car feels only slightly less settled.

Vertical movement is controlled more rigidly so you get jiggled around inside a bit more, but even in its most focused setting the Panamera retains the same flowing feel – just with more alert response to your inputs. There is more aggression to the way the dampers control the mass though, so you can throw the car around with a similar level of attack, leaning on the four-wheel drive system to fire you out of corners.

It’s rear-biased most of the time, but overwhelm those enormous rear tyres and the system diverts power to the front wheels to stabilise the car, delivering devastating cross-country ability – and this is the Sport Turismo’s selling point. 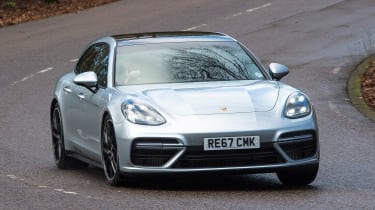 It’s incredibly refined – quieter and more comfortable than the Mercedes-AMG E 63 S on the move – and there’s lots of legroom in the rear. Thanks to the less raked roofline compared with the standard car, there’s more headroom in the back, too. Long-distance comfort is great, and there’s a middle jump seat giving seating for five for shorter journeys.

The cabin quality is fantastic, while the infotainment and speed of response from the 12.3-inch touchscreen – which controls many of the driving, climate, entertainment and connected services functions – is as fast as you’d hope.

So, the Sport Turismo is as capable as its standard sibling in Turbo form and adds a dash more usability for a £3,728 price premium. Not much given the overall price tag for something that offers a little more in the way of grand touring ability.