What are SEAT's greatest ever cars?

Online museum celebrates the the most important cars in SEAT's history, as brand turns 66 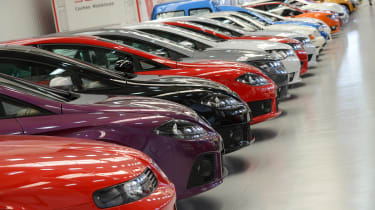 You might think of SEAT as a relatively new brand as part of the Volkswagen Group, but it was actually founded in 1950, turning 66 years old on 9 May. SEAT began life in an alliance with Fiat, which allowed the new car brand to start building cars for the Spanish people following the Second World War, using designs from the Italian company, building and selling them locally.

As most people couldn’t afford cars at the time, the first car to be built by SEAT was the 1400, mostly used by officials and as taxis. However the car that really got Spain moving was the famous 600 - based on the Fiat of the same name.

“SEAT was the brand that put the wheel on a nation. Suddenly the Spanish public became mobile, to visit their families and friends. The 600 was many families’ first car and it was the first affordable car in the country,” SEAT’s Jochen Dries told us. 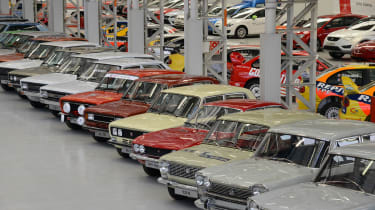 That’s just the start of SEAT’s story over the past 66 years, and it will all be documented in the now-global brand’s new digital museum. In 2014 we visited an event SEAT called the Archithon, a 48-hour architecture marathon where students from Spain and Germany (to reflect SEAT’s current VW Group ownership) came up with a design for the online space - and now SEAT is forging ahead in populating it with exhibits.

“For each car we have taken pictures to create a 3D model and built a content pack with technical data and the history of the model,” Dries said. “We have also been digitalising pictures over the last two years, plus a lot of videos that have never been seen before.”

Currently the online museum only features a handful of the most important cars in SEAT’s history, but the plan is to keep adding more cars, pictures and archive videos to flesh out the collection. You can find the digital museum on SEAT’s website now - it’s well worth a visit. 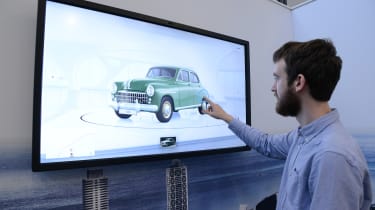 All of the real-life cars and media are stored at SEAT’s plant in Zona Franca, Barcelona, with most stored in an unassuming warehouse called A122. We got the chance to visit the facility, which isn’t open to the public, to see the brand’s incredible collection of historic cars.

The collection has been building up over decades at SEAT, but has never seen the light of day outside the company properly until now - and head of historic cars, Isidre Lopez, wants to expand even beyond the digital museum.

“For me it’s most important to get the cars out on rallies, motor shows and events like the Goodwood Festival of Speed,” Lopez told us. “It’s best to get them out there with legendary drivers, too.”

There are 170 cars in the hangar, and all have been completely restored from the ground up to make sure each one is as perfect as it can be - with the handful of employees in the hangar even going so far as to manufacture individual parts to original specifications to complete the restorations. There are 284 cars in the collection in total, though, with the remaining cars awaiting their day in the restoration workshop. 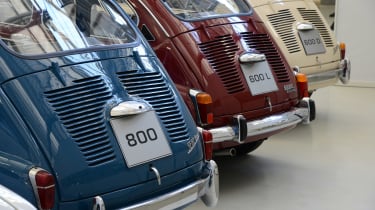 It’s an ongoing process, just like the digital museum. “We have at least 50 cars still missing. We are looking for an 850 Sport Coupe to complete our 850 collection at the moment - but it should be easy enough to find.”

We could have spent all day in the warehouse, which is packed with treasures - it’s a real shame that this isn’t a public place. The quality of each restored car is stunning, with most probably being the best examples of their kind in the world.

It’s impossible to pick a favourite, though Lopez, who previously worked in SEAT’s motorsport department, does have a keen eye for the racers. “For me the best cars are the race cars since I worked with them for 20 years. The 2000 Cordoba WRC car is special as I worked on it.” It’s hard not to admire the engineering of the competition cars, but if we had to take one home it would, of course, be the iconic 600.

What is SEAT's greatest ever car? 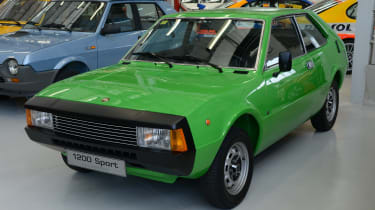 The 1200 Sport was the first car developed entirely by SEAT. It’s nickname, Bocanegra, means black mouth in Spanish, and the distinctive number design is part of the car’s sporty look. These days the 1.2-litre four cylinder engine wouldn’t be considered very sporty, but in 1970s Spain a top speed of nearly 100mph was good enough. 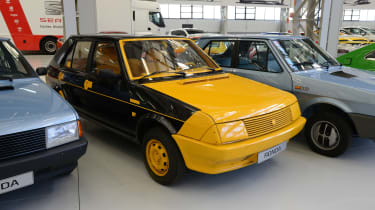 This SEAT Ronda is a one-off part of the collection. When the brand split from Fiat in 1982 the Italian brand launched legal action, saying that the design of the then-new Ronda was too close to the Fiat Ritmo. SEAT took this car to court, with all of the SEAT-exclusive bits painted in yellow, and won the case. 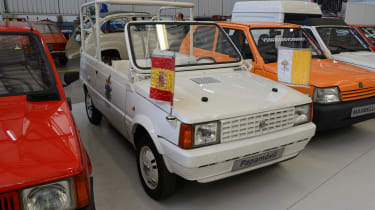 When the Pope visited Spain in 1982, a plan to visit the FC Barcelona football stadium was made possible thanks to this little SEAT Panda, modified to become the Papamovil. His normal popemobile couldn’t fit into the grounds, but the tiny Panda managed it without a problem. 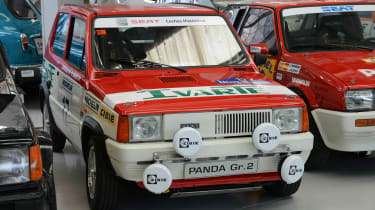 SEAT found itself with a problem after the Ibiza was launched - it wanted to go rallying, but didn’t have a powerful enough engine. That’s why it took to the gravel with this, the Bimotor. That’s right, two engines - one in the front, and one in the back - powering two wheels each, to make a four-wheel drive monster. 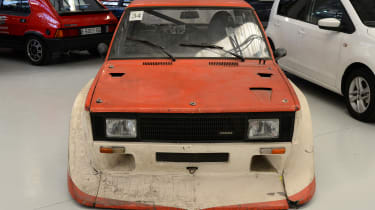 This SEAT 131 raced in some local touring car races, and is a recent addition to the fleet at the SEAT heritage collection. There’s no way it’s going to be driven in this state, but heritage boss Isidre Lopez says there isn’t a single part missing. Let the restoration begin… 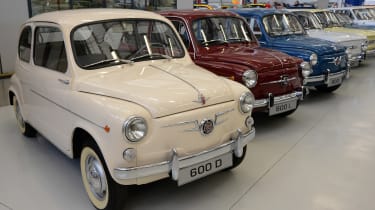 The SEAT 600 is one of the most important cars in the company’s history, giving mobility to the whole of Spain after the disastrous Second World War left the country’s economy in tatters. You can se why it was so popular, with its cute looks and charmingly basic interior. 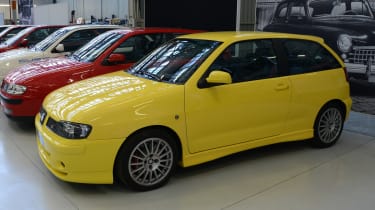 You don’t see many 2000 Ibiza Cupra Rs on the road any more, let alone in this condition. It featured a 1.8-litre petrol engine with nearly 180bhp, which was enough for it to hit 140mph. Only 200 units were ever produced.

What is your favourite car from SEAT's past? Let us know in the comments section below...