The chunky Toyota Urban Cruiser is a stylish alternative to traditional MPVs, and offers good fuel economy and build quality 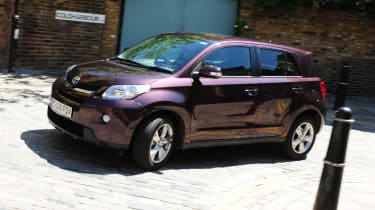 The Toyota Urban Cruiser is based on the Yaris supermini and is designed as a rival for the Kia Soul and Nissan Note. Despite the chunky 4x4 styling, the Urban Cruiser is more suited for city driving than tackling the toughest terrain. The petrol version is only available with front-wheel drive but the diesel does get four-wheel drive. The boot is on the small side, but the rear seats fold  and slide easily for more legroom or boot space as required. All Toyotas come with a five-year, 100,000 mile warranty and the Urban Cruiser feels very well built.

The Urban Cruiser handles surprisingly well, with very little body roll and steering that's light but accurate. There's very little wind and road noise, but the ride is quite firm at low speeds. There are only two versions available. The entry-level model is the smooth and quiet 1.33-litre four-cylinder petrol engine, which produces 98bhp and 128 Nm of torque. This means it can go from 0-62mph in 12.5 seconds and has a top speed of 109mph, but it is only available in front-wheel drive. The 1.4-litre diesel, producing just 86bhp and 205 Nm of torque, is noisy and gruff at all speeds but comes with four-wheel drive. It also manages the sprint from 0-62mph in 12.5 seconds. Both come with a six-speed manual gearbox.

Both versions are cheap to run. The 1.4 diesel offers fuel economy of 57.7mpg and CO2 emissions of 130 g/km, while the petrol model can return 50.4mpg and emits just 129g/km of CO2. Stop-start is fitted as standard, as is a gearshift indictor, which suggests which gear is best for every situation, to help maximise fuel economy. Toyota offers a range of fixed-price servicing, which starts from just £129 for the Urban Cruiser and should help keep costs to a minimum.

The Urban Cruiser isn't as striking as some of tis newer rivals, but the chunky styling still looks great. Alloy wheels and a rear spoiler are fitted as standard, too. The interior is a bit drab, especially compared to newer rivals like the Kia Soul, Nissan Juke and MINI Countryman, but it is classy and feels very well built. There aren't any trim levels. Standard equipment includes climate control, all-round electric windows, front and rear fog lamps, as well as MP3 and Bluetooth connectivity. Urban Pack adds rear parking sensors, while Style Pack adds scuff plates, front chrome stripes and a leather handbrake.

The Urban Cruiser is based on the same platform as the Yaris supermini, but thanks to its squared-off design there's plenty of space inside for four adults and their luggage. There's 314 litres of boot space and a maximum of 749 litres - this is much more than most superminis but considerably less than the MINI Countryman. The rear seats fold flat and they also recline and slide backwards and forwards for more legroom or boot space as required. There's also plenty of storage space in the cabin, with big bottle holders and a dual glovebox.

The Urban Cruiser hasn't been crash tested by Euro NCAP but it does come with seven airbags, ABS, traction control and seatbelt reminders as standard. Toyota finished an impressive fifth out of 30 in the 2012 Driver Power reliability survey, and there have been no reports of any major issues with the Urban Cruiser since it was launched in 2009. All Toyotas come with a five-year, 100,000 mile warranty, too.