Concept to reality: VW up! concept to VW up!

We trace the evolution of the 2007 Volkswagen up! concept through to the 2011 production car 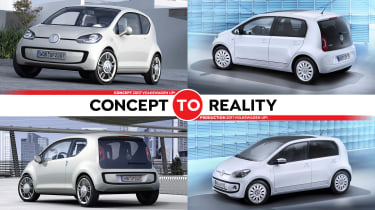 We love concept cars that really push the boundaries of conventional thinking – pure flights of fancy released to grab headlines and little more. Yet over the years, Auto Express has seen dozens of show cars that have morphed into models that have been bought in their thousands.

In this series, we look at some significant concept cars and chart how they were transformed into production realities. In some cases, the show car was a thinly disguised taster for what lay ahead. In others, the manufacturer had to make significant changes before it had a car ready to sell to the public.

This pick falls into the second of those categories, because while the eventual product retained lots of the concept’s appeal, the fundamentals went through a polar shift in the transfer from motor show stand to dealership.

When it was first released at the 2007 Frankfurt Motor Show, the Volkswagen up! concept was said to preview the car that the German manufacturer hoped would become the spiritual successor to the Beetle: a real people’s car for the first half of the 21st Century.

And there were some very clever ideas on board – enough, in fact, for the up! to be one of the real showstoppers at that Frankfurt exposition. There was the neat all-glass tailgate, clever interior packaging that could accommodate four adults and, most notably, the car was rear-engined – another sign that the design and engineering teams had the original Beetle in mind. It was certainly a bold step for VW, whose city car offering at the time was the fairly agricultural South American-built Fox.

Few details were issued on the proposed engine range, although it was widely reported at the time that the up! would be offered with a choice of a two-cylinder unit, or the 1.4 TDI three-cylinder diesel from the Polo BlueMotion. 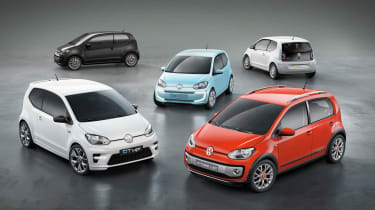 When it came to building the production model, though, VW faced a number of tough decisions on price. At an engineering level, there was a huge swell of support for the rear-engined concept, because the location brought packaging advantages to the cabin while still allowing usable storage in the up!’s nose (it lacked a conventional boot, but there was a load ‘shelf’ above the engine, behind the second row of seats).

In the end, though, the bean-counters won the battle by arguing that the engine required to fit into the available space at the back of the car wouldn’t really have much use beyond the New Small Family (as the production project was called by that point). And that meant the development costs per unit rocketed – on a car that was deliberately meant to be globally affordable, not just in well heeled western Europe.

So four years after the concept’s debut, the production up! made its first public appearance at the same venue, but as a front-engined model with more conventional packaging. That decision allowed the car to tap into the development project of the EA211 engine – a 1.0-litre three-cylinder motor which could be normally aspirated or turbocharged, and has subsequently appeared in the Golf, Polo, T-Roc, Audi A1, SEAT Leon and many others.

Even with the savings made through using one of the VW Group’s most widely manufactured engines, though, the New Small Family is still considered a break-even project within the corridors of power at VW, rather than a resounding success. It has never been quite cheap enough to be sold in emerging markets such as India and China – and as such the up! has thus fallen short of the huge volume of sales originally envisaged.

It’s still one of our favourite small cars – along with its sister models from SEAT (Mii) and Skoda (Citigo). But the up! we know today is a great example of how the purity of a concept’s vision can be diluted – twisted, even – by the time we all get to buy it.

Are you a fan of the Volkswagen up!'s styling? Let us know in the comments below...