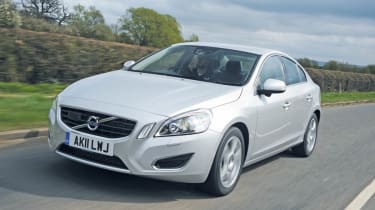 Despite admirably low running costs, the S60 doesn’t suit the DRIVe treatment. It fails to dip below the magic 100g/km CO2 emissions mark – unlike the V50 – and the stylish looks and well designed interior can’t gloss over the unsettled driving experience. At £27,445, it’s expensive, too, and still can’t compete with the German models it’s aimed at.

This Swede is getting greener... The attractive Volvo S60 is still relatively new, but that hasn’t stopped the company from extending the range with an  ultra-economical DRIVe version.
Joining a line-up that already includes more efficient variants of the C30, V50 and S40, the newcomer uses the same  1.6-litre diesel engine,  producing 113bhp and  a useful 270Nm of torque.
Video: watch CarBuyer's video review of the Volvo S60
[[{"type":"media","view_mode":"content_narrow","fid":"69247","attributes":{"alt":"","class":"media-image"}}]]
Even in the bigger S60 saloon, it’s an impressively frugal drivetrain, with stop-start, longer gearing and low-rolling-resistance tyres helping return 65.7mpg combined. Meanwhile, CO2 emissions are pegged at 114g/km – less than most  hatchbacks. The tweaks also  give the DRIVe a huge theoretical range of more than 1,000 miles from a single tank of fuel.

There are drawbacks, however  – the S60’s heavier kerbweight means the six-speed manual gearbox has to be worked hard, and it struggles even more when fully loaded with passengers.  Unlike earlier DRIVe models, there’s little to distinguish the eco Volvo from the rest of the range. The firm no longer fits  ‘solid-effect’ aerodynamic alloy wheels on its green models, so  five-spoke rims are standard.
In fact, a small badge on the bootlid is the only visual clue  to the car’s green credentials – making it perfect for customers who are keen to cut their fuel  use without shouting about it.
It’s still a very stylish choice. The vertical LED strips that sit inside the headlights help give the front end a neat, streamlined look, as does the tapered boot. The interior is as spacious and comfortable as you’d expect from a Volvo, with driver and passengers equally  well accommodated, although the 339-litre boot is a little on  the small side – especially when you consider that the sleeker Passat CC has a vast 532 litres with the rear seats in place.
The dash is a step up in  class over previous Volvos, with the brushed aluminium console  now angled towards the driver  for a sportier appearance. The  integrated colour display gives a premium feel, so it’s a real pity that navigating the various menus still requires the use  of a fiddly remote control.
Yet the S60’s biggest flaw is the driving experience. The lack of power wouldn’t be a problem  if the DRIVe was a comfortable cruiser, but its suspension rarely settles on the motorway, and on twistier roads it crashes over bumps and potholes. While the steering is accurate, it provides minimal feedback, and the body isn’t as tightly controlled as the BMW 3-Series or Mercedes C-Class.
The DRIVe isn’t a bad car, but  it is caught halfway between  a sporty and comfortable saloon – and therefore still some way off the class best.
Share this on TwitterShare this on FacebookEmail