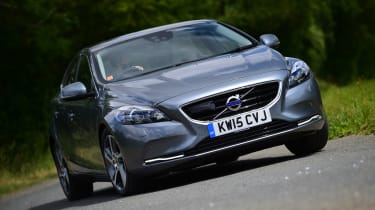 The second-generation Volvo V40 has always been a top choice in the premium hatchback market. With its distinctive looks and well made interior, it’s become Volvo’s best-selling car in the UK. Now three years old, the car gets a new range of diesels and petrols; but while this new 1.5-litre T3 petrol auto model is good, it’s pricey against rivals like the Mercedes A-Class and Audi A3 – cars that offer a more premium feel and badge.

When a car gets to the middle of its life cycle, it’s time for a light facelift and overhaul – but that’s not the case with the Volvo V40. The five-door hatch is the Swedish brand’s best-selling car in the UK; and although it’s now three years old, the design still looks as fresh as it did upon the car’s 2012 launch. With that in mind, Volvo’s sole focus for this 2016 model year update is on improving running costs.

Unlike other models, the V40 is now exclusively available with a four-cylinder engine as part of the firm’s downsizing master plan – out go throaty five-cylinders and in come fuel-efficient four-cylinder petrols and diesels. 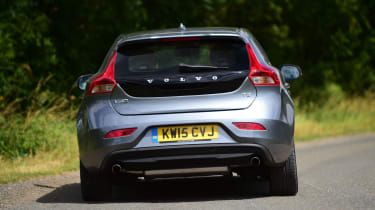 Plus, crucially, Volvo is saying goodbye to buying engines from other makers and investing in its own production. So, the V40 now gets a brand-new line-up of in-house-developed Drive-e engines.

Naturally, there’s a range of diesels, with the basic 188bhp D2 emitting just 94g/km of CO2, but we got behind the wheel of the mid-range T3 petrol. There’s a 2.0-litre four-cylinder in the manual car or a 1.5 four-cylinder in the automatic, but both engines have identical 150bhp and 250Nm torque outputs, plus 0-62mph sprint times of 7.8 seconds. Still with us? 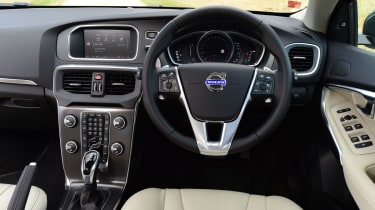 Get past the slightly odd similarities, and you’re left with what is, essentially, a very good car. Our test model was the six-speed automatic, which swaps cogs swiftly and easily. The engine is decent, too – it’s incredibly quiet when cruising on the motorway, while even under hard acceleration, it barely makes itself heard.

It claims 51.4mpg economy and emits 129gkm of CO2. That’s just 2mpg down on the 1.6-litre Mercedes A 180 Sport DCT, but the Volvo packs an extra 28bhp and gets from 0-62mph over a second quicker. The Audi A3 1.4 TFSI Sport offers similar performance, emits 115g/km, is cheaper to run and, along with the Mercedes, costs less, too – the V40 will cost you a little more.

Still, the Volvo is a stylish choice and is also packed with standard equipment. Our SE Nav Lux had leather seats, sat-nav, 17-inch alloys and city autonomous braking.